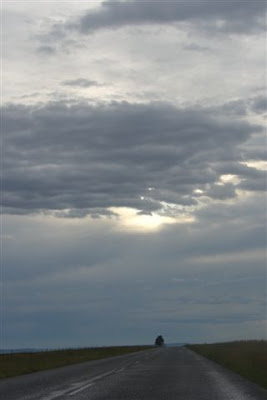 Have you ever woken up in the morning and thought: "Urgh, I don't want to face this day"? In my adult life, I have never had this experience. Except yesterday. I didn't want to get up. Why? Because I had an appointment in the city: I had to take my little pick-up to have a few things checked. (All cosmetic)

Now why would I not want to go to town in my little car, which I LOVE as a general "run-about" around town? Well, for a start, it has no airconditioning. I don't know about people in other parts of the world, but for me as a South African, and with South African weather hot to very hot for most of the year, I think that airconditioning in a car is the best invention since sliced bread! Another thing is, its speedometer is only marked to 16okph/100mph. Now I'm not a speed freak (I have to say that; you never know when a traffic inspector may read my blog!) but I like to know that I have power when I need it. (lol)

I almost cancelled my car's appointment with the agents when I remembered that I had to collect something which my husband and I had decided to buy. It 's a boy's bicycle. We had promised Emily that when her oldest grandson passes his school year, we would buy him a real bicycle. Emily has kept information under wraps from the whole family - especially from said 7 year-old grandson. Next week his mum, Betty is coming on leave from her job in Johannesburg. (Together Emily and I decided we'd wait until she arrived and then spring the surprise) Betty is able to visit her little boy during Easter and at Christmas time. Imagine seeing your child twice a year? That's it. Yet this is the norm for many of these families. The children - the blessed ones - grow up with their grandparents and often also with other family members. This lad lives with his widowed grandmother, unmarried aunt (his mother's youngest sister) and her child, a lively toddler of 18 months.

Back to the task in hand: this morning I decided, in order to motivate me on my journey, I 'd to look for all the interesting things along the way. If I saw a pretty scene, interesting landscape or anything else worthy of a photograph, I would stop and photograph it! Now, my husband doesn't read my blog, but if he did today, he'd be rolling his eyes. Whenever we're on a trip, he says that if he had to stop every time I exclaimed at a beautiful scene (and I often add wistfully: "Oh, if I was driving, I'd stop and take a photo of that") then we'd never get to our destination. 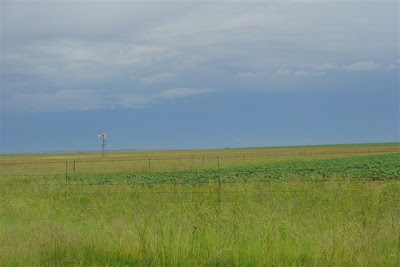 We'd had a heavy downpour of rain the night before and the sky was heavy with clouds yesterday morning. Because of the cool conditions and the early hour, I saw many birds in the fields, in the road and on the fences next to the road. At the moment we have an abundance of Long-tailed Widowbirds. The male is glorious in breeding plumage with an impossibly long tail. His [many] wives are drab and non-discript by comparison. Southern Red Bishops, also beautfully dressed for the courting season, flushed up out of the long grass as the vehicle passed; I even spottted a few (quite rare) Yellow-Crowned Bishops.

When I stopped to photograph the field in the photo above, I heard the call of the Orange River Francolin. (A very distinctive but fast phase: "I'll drink your beer"). I didn't have to wait long when it came running out of the long grass and along the road verge for a few seconds only to disappear into the lush field again. 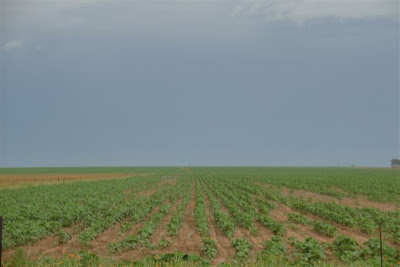 A few kilometers ahead I stopped again. I just loved the patern of the rows in this field 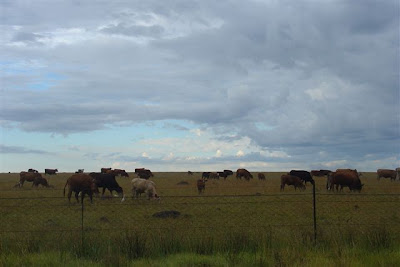 A little while later I stopped and got out to photograph these cattle. The sky was much gloomier than the photo shows

Shortly after taking off in my car again, a flock of helmeted guineafowl ran across the road. Hunting season is long over but they were very skittish; even though I stopped (I can just see my husband's face!) I couldn't get a clear photo of them. 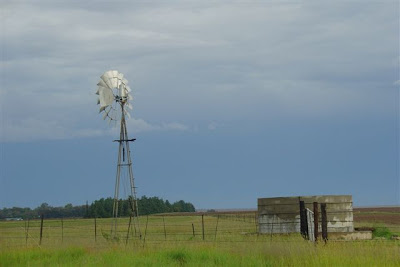 Yet a few kilometers ahead I stopped to get a picture of windmill and resevoir
A grey heron flew up in front of my path as I set off again. I hadn't seen it soon enough, else I'd have stopped again and tried to snap it on camera.
I eventually got to the city, did all my business and made my way home in the heat of the day. It was not as bad as I thought it would be. Just shows the human body can stand much more than we give it credit for (*sigh* I do love the odd creature comfort ) 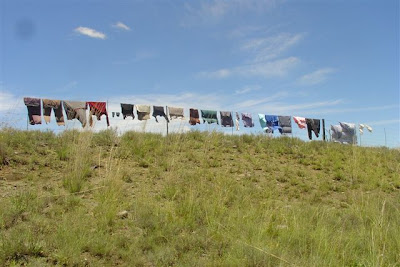 On the return trip, I stopped to take this photo. Only in Africa, I suspect, do you see washing on the fence next to the motorway 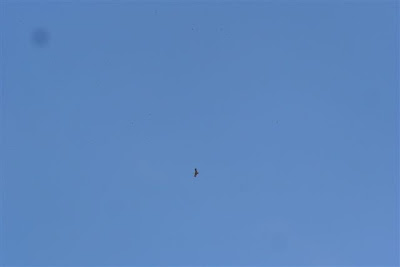 I had my little camera (and no long lens) with me, so you have to take my word for it. That's an eagle up there, folks! 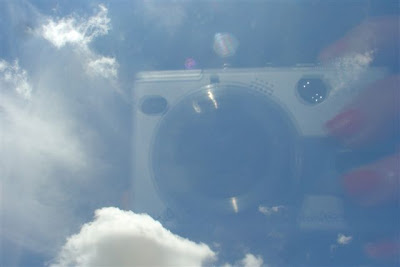 The sun was out and the clouds in the sky were so pretty, I decided to take photos through the windscreen. Imagine my surprise (and delight) when I saw this "special effects" photo when I uploaded it to this post! 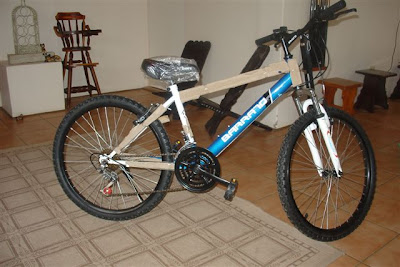 The Surprise - can you imagine the little guy's face when he sees this?