Last week Grant came home with an invitation to a wedding in the city. The father of the bride is a busines associate and connected to the company Grant and Issam work for. Issam, Grant and I attended the wedding together. The reception was held in a new wedding hall in Bahri (Khartoum North) across the Nile from where we live in Omdurman. In May we also attended a wedding (a double one) with Issam, which you can read about here,  but this wedding was a really upmarket, plush affair.
I was intrigrued that you don't actually get to see the parents of the bride or groom. We were welcomed at the door by the bride's father but he stayed at the top of the hall, even going home before the end of the reception. When I asked Issam where the mother of the bride was, he said she was probably somewhere in a group of women. She is very shy and quite a bit older than her husband, apparently you never see her! The groom's father made an appearance at the dancing group (see photo near bottom of post) with his friends. But I have no idea who the mother of the groom is. We also didn't get to hear the names of the bridal couple.
However, the setting was beautiful, the reception was great fun for me who met quite a number of people and took lots of photos. And the food was delicious. 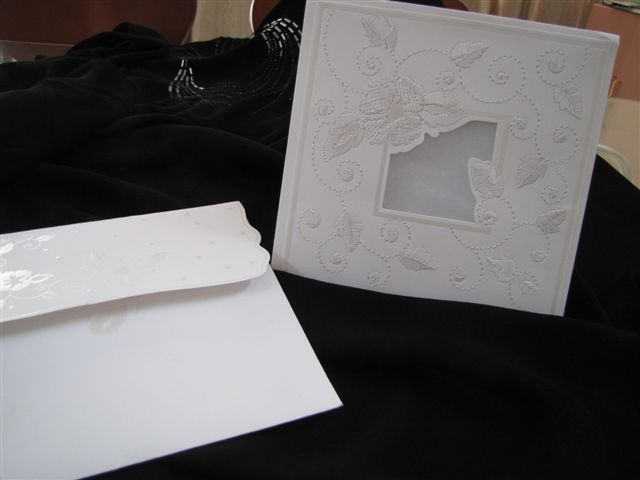 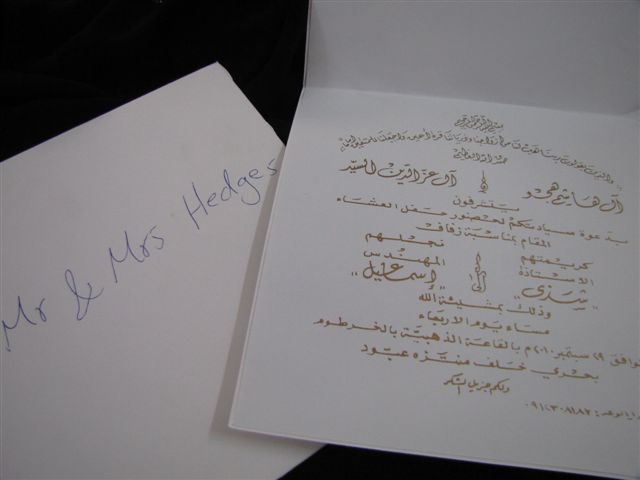 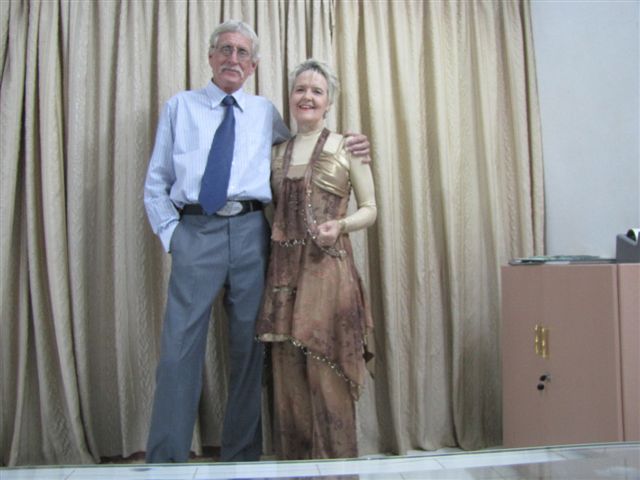 Here we are: off to the wedding on Wednesday evening 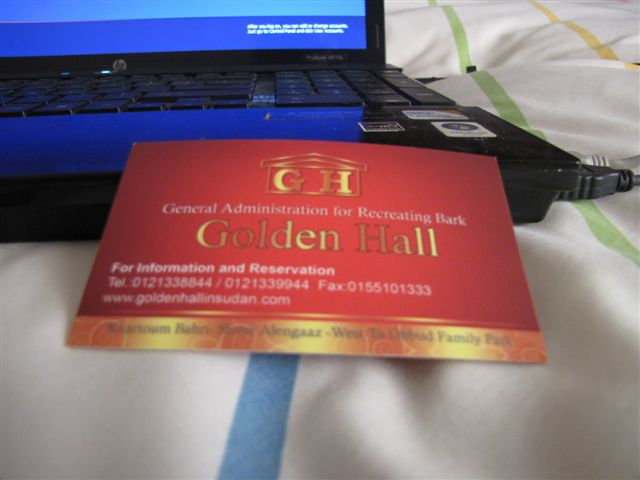 Catering for weddings is big business in Khartoum now. Wedding halls such as this one (see exterior below)  are used. The caterers attend to every detail of the wedding: decorations, music, food, the cake, the photograher and videographer and invitations. This hall is part of a  recreational (theme) park which are also very popular in Khartoum. There is no "P" in Arabic, hence the  word "Bark" 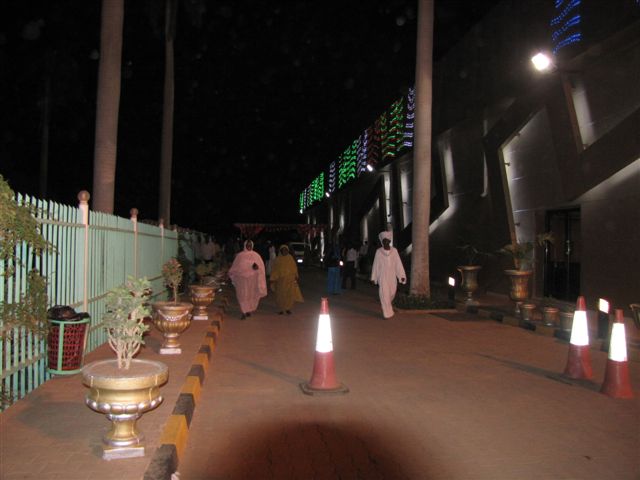 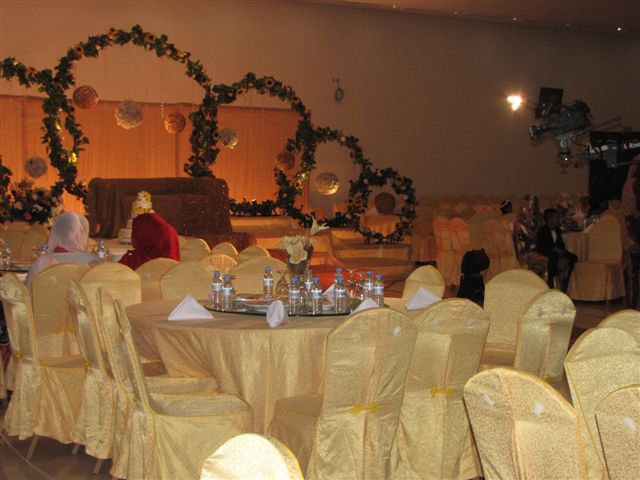 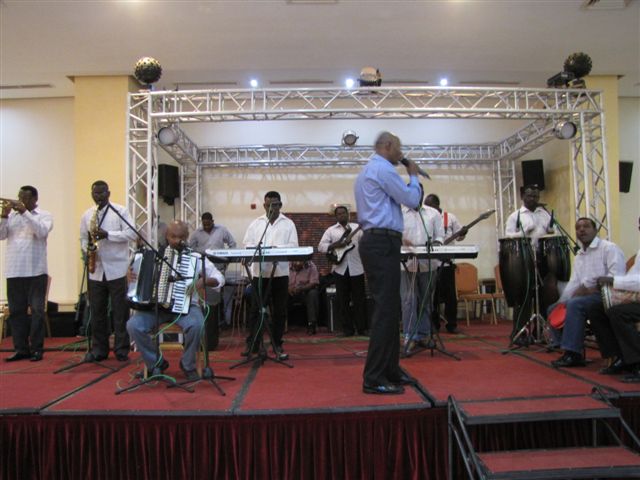 A live Sudanese band provided the music for the wedding reception. By law the music stops at 11pm. The guests only arrive between 9 and 9.15. The bridal couple arrive at about 9h40. All in all, only a short reception 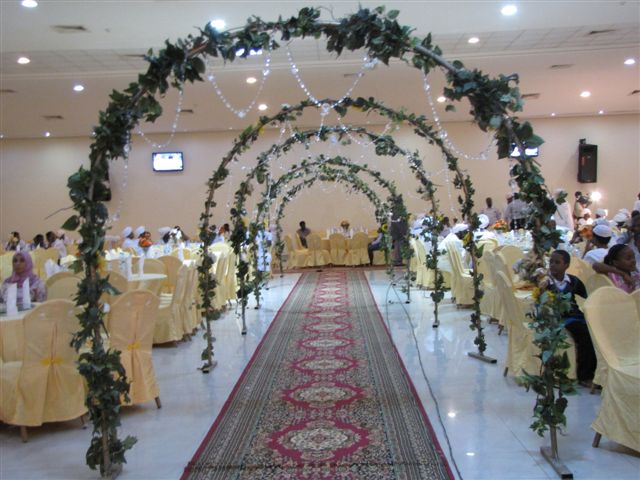 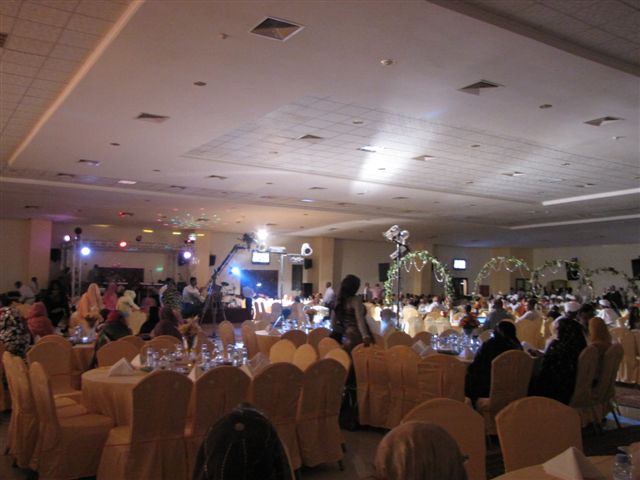 The arrival of the bridal car outside was shown on the huge TV screens. The band stopped playing, the lights were dimmed  and  taped music was used for the bridal procession. I was fascinated that "Here comes the bride" (in English) was played although the lyrics were totally different. 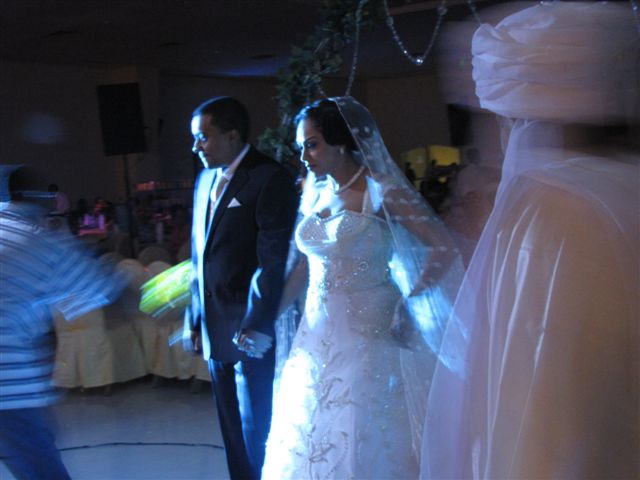 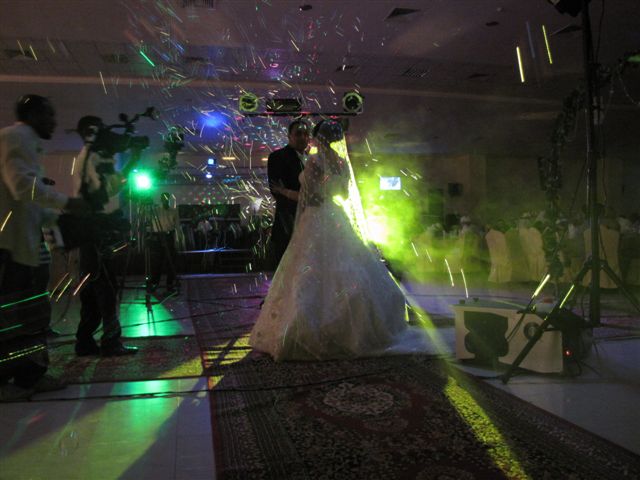 The bridal couple stopped in front of the arch and had their first dance together. This is a very westernised part of the ceremony, as is the bride wearing a white gown and the groom wearing a suit instead of traditional Sudanese outfits 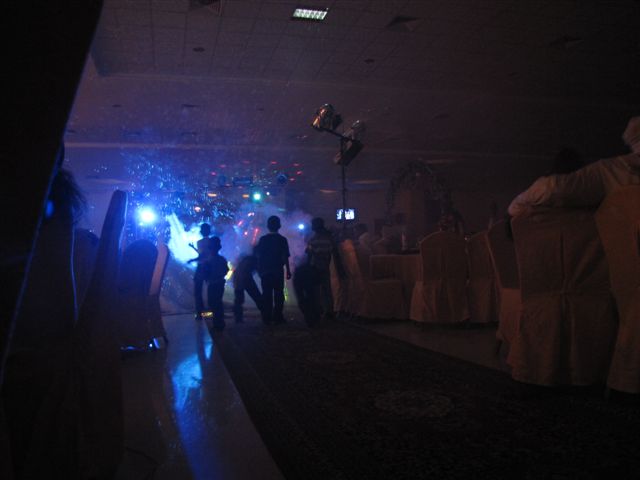 I just had to include this photo. I loved the way all the little boys dashed forward and tried to grab the bubbles which were floating around the bridal couple 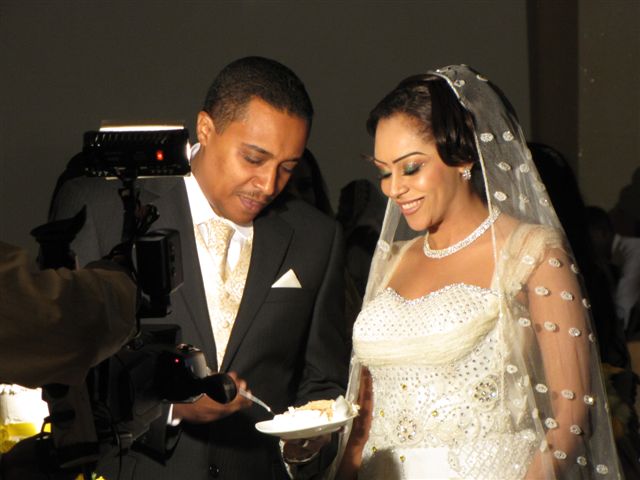 After the first dance together, the bridal couple proceed to a table where a three - tier - wedding cake was displayed. The cut the cake together and then feed each other a mouthful of the delicacy. This is to signify the hope that their married life will be filled with sweetness 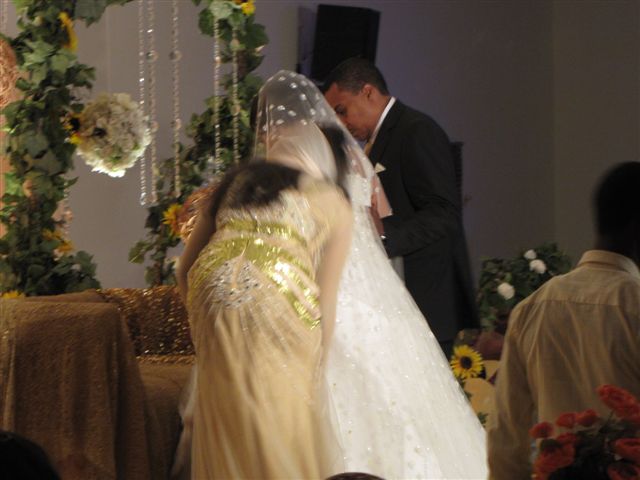 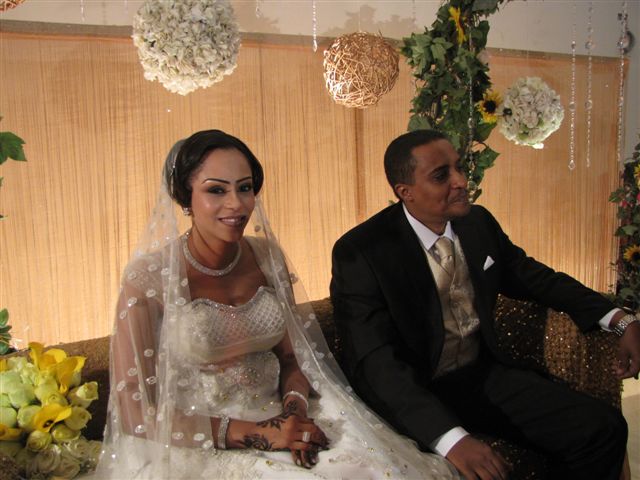 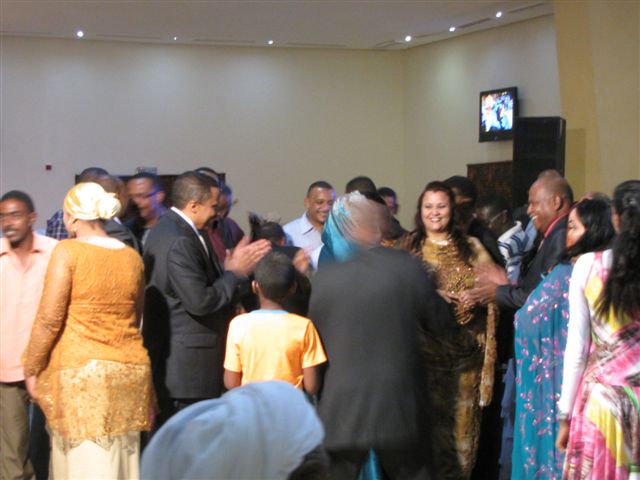 No matter what your age or gender, you join the happy group in front of the bandstage and dance. Yes, dance, clap your hands, click your fingers, stamp your feet and have a good time! 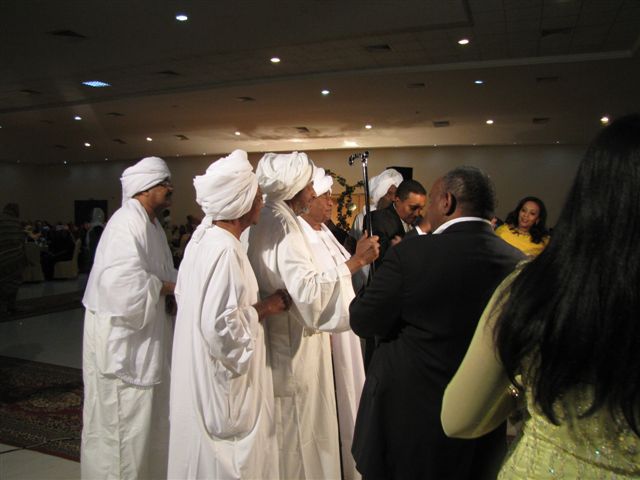 While the people were dancing in a bunch, the older men of the groom's family marched down the hall from the back. The oldest gentleman (I heard he was the groom's father) lifted his walking stick and waved it around happily, smiling and nodding at the groom. The groom is just visible behind the walking stick head 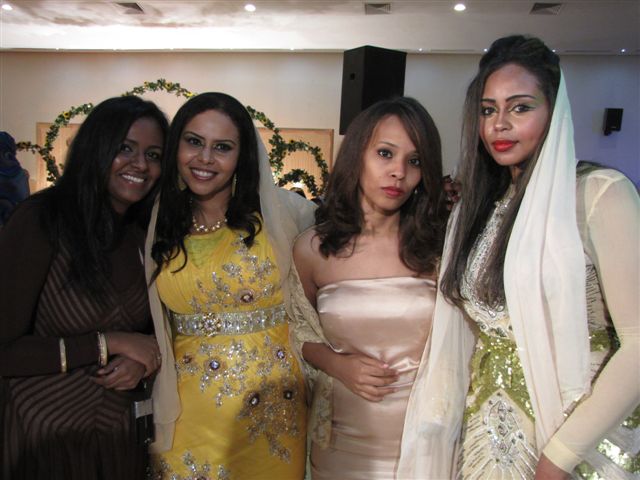 These ladies asked me to photograph them. The pretty one in yellow was one of six bridesmaids. The bride's sister, (not pictured) a married woman with a child, was the maid of honour. The tall beautiful girl on the right of the photo was also a bridesmaid. (I was unable to get a photo of the other bridesmaids or the maid of honour) 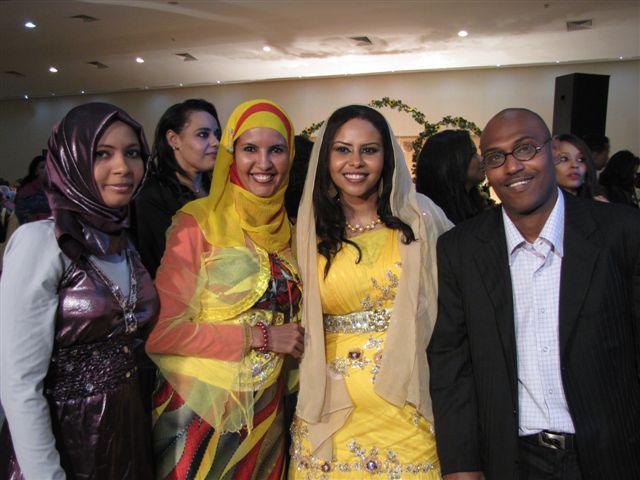 On one of my forays into the dancing crowd (to take photos!) I stopped at a table and chatted to a young woman. She was the fourth stranger I'd struck up a conversation with that night! Grant always says: "Jo, what do you talk about to people you don't know?" Ha!  The lady in question ,  second from the left, in red and yellow,  was called Mona and works at the Ministry for Industry. By the end of the evening she'd introuced me to several of her cousins (one, standing on her right) family of the bridegroom, (the bridesmaid in yellow and the handsome fellow) and a couple of aunts and uncles attending the wedding. She also invited me to a workshop at the Ministry next month 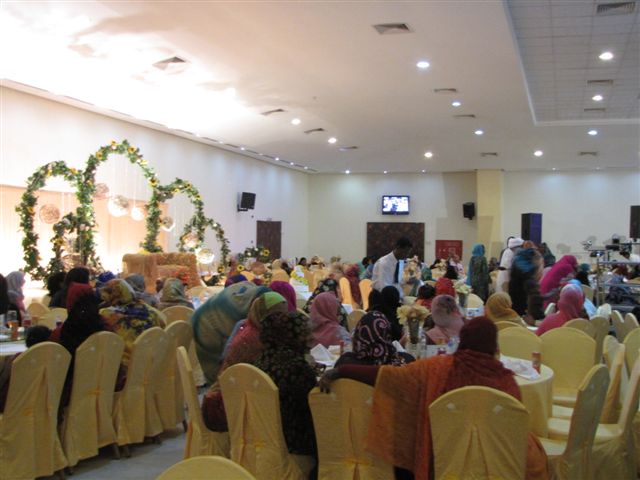 The wedding proceedings,  from the time the bride and groom arrive outside the hall in the bridal car, is videoed and guests can follow on large overhead screens 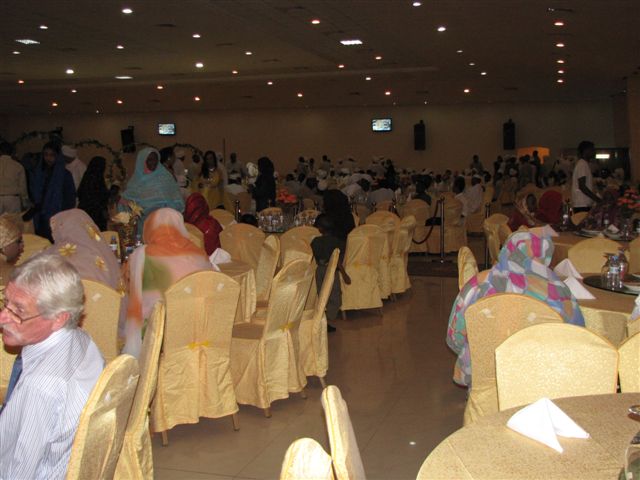 If you look towards the back of the photo, you'll see groups of men - mostly turbanned -  sitting at tables near the entrance . I think many of them smoke and this is not allowed indoors so they sit there to make a quick exit outdoors.  In the foreground of the photo you'll see women and children sitting in groups at the tables 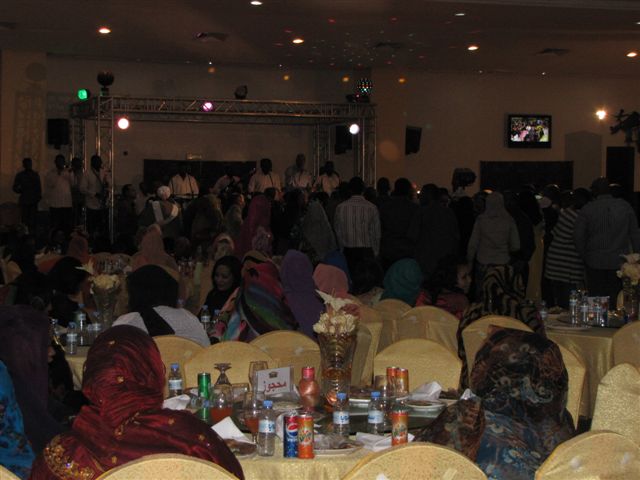 Note again: women sit in groups at the tables. Near the band, young and old stand and dance to the music 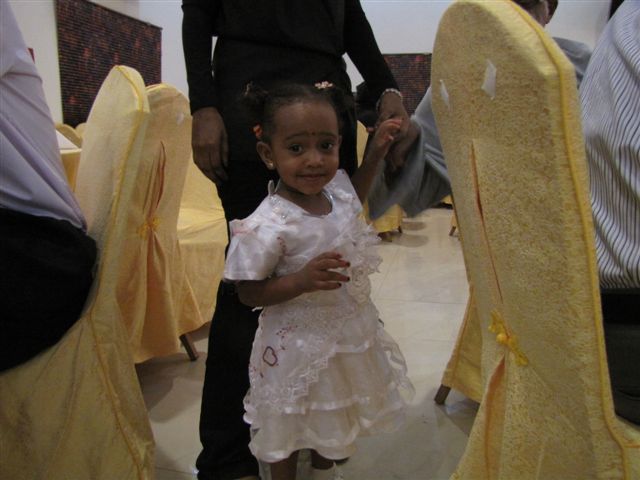 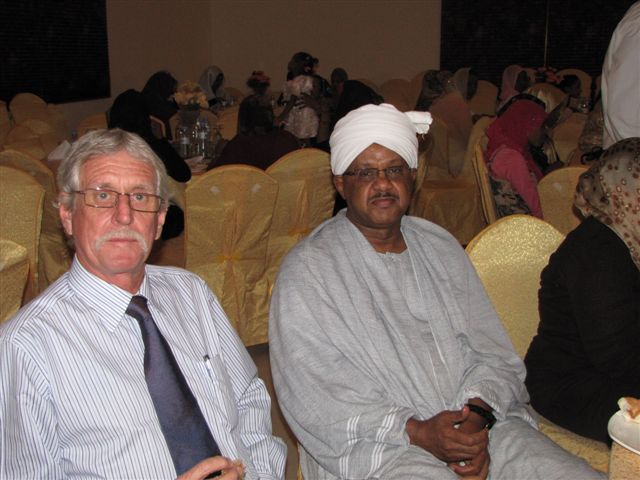 Grant and Issam looking rather serious.They assured me they were having a great time! 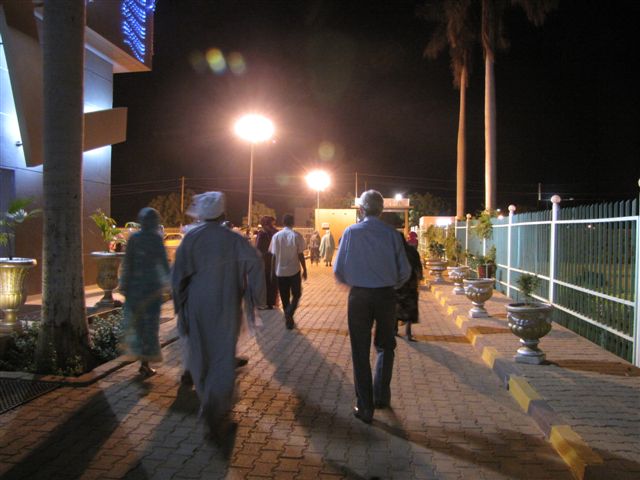 The walkway from the wedding venue. Grant and Issam walking towards the car park after the wedding
For more posts on other people's worlds, click here
The Arabic for wedding is Zfāf  (Zifaaff)
Posted by Jo at 3:30 AM