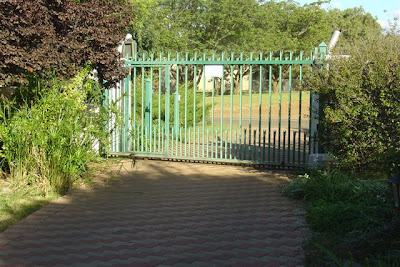 Our electric motor gate to which my children
all have their own remote control devices
My older son and d.i.l. are staying with me at the moment so my younger son Angus and his wife, Amanda (who live around the corner from me) pop in regularly to visit. On Sunday night, my older son invited Angus and Amanda for a cup of coffee and cheese puffs. Our children all have remote controls to operate our electric motor gate, so access and departure is pretty simple.

They had been visiting for an hour already when I came through to my office. As I sat at my desk, I heard my dogs and the neighbour’s dogs barking furiously. I popped my head out of the window and was horrified to hear a piercing howl. My neighbour was away for the weekend and my first thought was that her two large dogs were mauling her miniature Jack Russell. 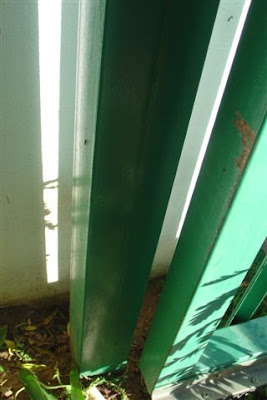 The gap in which Megan's head was stuck
I sprinted up the driveway towards the gate when I realised the yelping was coming from poor Megan, my eleven-year-old Scottish Terrier x Maltese poodle. I couldn’t see too clearly but I saw that she had been caught in between the gate and the post. I ran back indoors, grabbed my remote control and dashed to the gate again. By now Eddy and Angie were very worried and were milling around Megan while her screams grew louder and louder.
Holding onto the poor dog with my left hand, I held my breath and pressed the button to open to the gate. I was nervous that her poor head would be crushed in the movement but praise God, the gate opened and suddenly Megan was free. She sped down the driveway to the house and by the time I came inside, I found her sitting under a chair in the entertainment area and panting frantically. 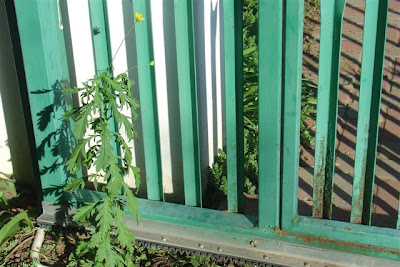 Megan often makes a dash for the last gap in the gate as it is closing. This time, however, her timing was out
After ascertaining that she wasn’t bleeding or injured, I warmed a bowl of milk and crushed half an analgesic into it. She drank that and when I checked on her again, she was sleeping on the armchair! 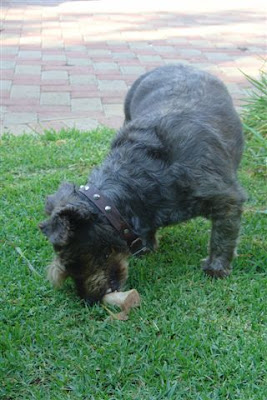 Megan enjoying her bone on Monday afternoon. None the worse for the wear after her harrowing Sunday night ordeal with the electric motor gate!
While this drama was playing out, all the family were looking up friends on Face Book. When I came in and told Angus that it was probably when he entered the yard that Megan had tried to get out into the street (she has this bad habit), they all traipsed out to check how old Meggie was.
Then Angus, ever the joker, said: "Mom, you should have taken a photo of her stuck in the gate and you could have blogged about it!”
At the time, I couldn’t think about anything but releasing Megan from that gate. Today I photographed the scene of the accident and yes, here is the post!
BTW, I don't think Megan will try to run out of the gate again.
Posted by Jo at 4:30 AM