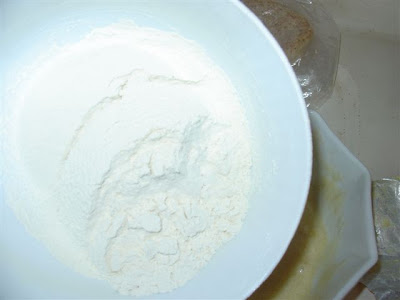 I sifted the dry ingredients before adding to the creamed mixture
Last week I had two bananas going ripe. This sparked off the idea to bake banana bread. Only one problem: there was no electric cake mixer in the flat. (When would a man ever use one? I am the first woman, in six years, to live here) I asked hubby if we could pop into Afra Merkezi (Afra Market) across town. Afra is a large departmental store where you can buy anything from a nail clipper to clothing for men, women and children including a huge baby section, to airconditioning units and top-of-the-range laptops and their attachments. It also has a huge supermarket section which sells all manner of groceries, fresh produce, fish and meat as well as the most beautiful array of chocolates, sweets, nuts and dried fruit I have seen in my life. I would love to take photos in Afra but I'm not sure whether my husband would approve. He would be wary (and rightly so) of the manager and assistants questioning my actions!

When we arrived there we walked directly to the household appliances. There were rows of shelves displaying the most modern kettles, irons, coffee machines, blenders, milkshake- and ice cream makers. There was every type of food processor there were electric meat mincers, bread machines, deep fat fryers and electric frying pans. But alas, no electric cake mixers. I looked for a hand-held model, thinking that anything was better than what I had back at the flat (an ancient wooden spoon!) No joy. Not an electric cake mixer to be had in the whole of Afra. Some day soon, we will make a foray into the city one day and track down said electric cake mixer. 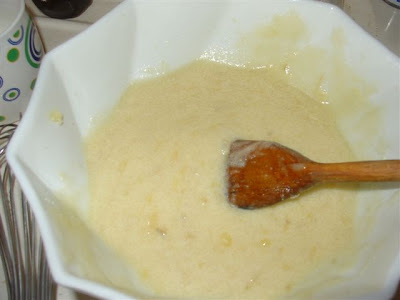 When we got home, I took out the softened margarine, added sugar and began to mix it all together vigorously (with the wooden spoon!) Soon I had what looked like a creamy consistency but I could still feel sugar granules which is never a good sign in a batter like this. I continued to make the banana bread according to a recipe I'd downloaded from the Internet and duly poured it into a foil-lined loaf pan. As I only have a gas stove here with no visible markings left on the dial, I turned the oven on to what I imagined was a reasonably hot stove. (180°C/350°F) and popped the loaf inside. 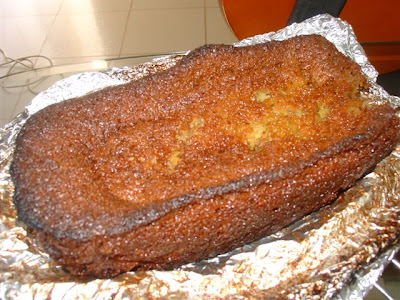 The baked item was not too bad, but not my standard banana bread. But then these weren't usual conditions and this banana bread had not been created under normal circumstances! It was absolutely delicious though. My husband had a slice while it was still on the cooling rack (he had no reservations about the shape of the bread); his verdict: excellent! That evening we both had a generous helping topped with homemade custard for dessert.

Below is the recipe which I'm sure would turn out perfectly with the correct utensils and oven temperatures. 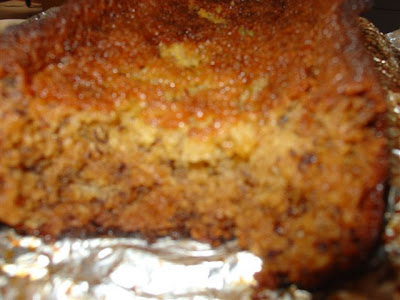 The banana bread was delicious served as dessert with homemade custard


Banana Bread (downloaded off the Internet)

Ingredients
50g margarine or butter (I used butter)
300ml sugar
1 large egg, separated
1 large egg white
3 Bananas
5ml (1t) lemon juice
300ml cake flour
10ml (2t) baking powder
10ml (2t) bicarbonate of soda
250ml (1 cup) bran
125ml (½ cup) buttermilk
Method
1. Cream the margarine and sugar together; add the egg yolk and beat well. Beat the egg whites until just stiff and fold into mixture.
2. Peel and mash the bananas and add the lemon juice. Combine mashed bananas with creamed margarine mixture.
3. Sift the flour, baking powder and bicarbonate of soda together, add the bran. Fold the dry ingredients into the banana mixture alternatively with the buttermilk, mix well. Pour the mixture into a greased loaf tin and bake in a preheated oven at 180ºC for 45 – 60 minutes, or until a skewer comes out clean
Serves 14.
Posted by Jo at 4:30 AM