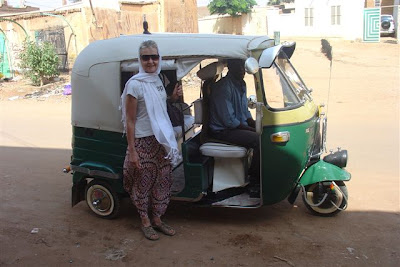 Here I am posing at the rickshaw before going for a ride to the bakery
Passing the local bakery almost daily when in the landcruiser with my husband, I was keen to go inside and if possible, take some photos. We stop there often but my husband always runs in and emerges with the hottest, most delicious pitas on the planet. When I mentioned wanting to see the bakery again, he said why not take a rickshaw - a popular mode of transport around the streets.

As I picked up my purse and the door keys, I casually mentioned to hubby that I hoped the rickshaw driver returned with me. He looked up from his computer and with something like panic in his eyes, said, "Ask Achmed to go with you in the rickshaw." (LOL!)

I went downstairs, called Achmed and explained what I wanted to do. At first he said: "My friend, Mohamed, he have fresh khobuz (bread)" Mohamed runs a little spaza shop across the road from the flat. I said I always support Mohamed but I wanted to go to the bakery to take photos.

Once we were out in the street, standing in front of Mohamed's shop, Achmed hailed the next rickshaw that came along. (there is one every minute or so) When he relayed my request, the driver beckoned for me to get in. Pointing to my camera, I told Achmed I'd like to take photos first, would the driver mind? Achmed said: "No problem" and once I'd shown him how to use my camera, he took the above photo. I boarded the rickshaw and off we went up the street. (Somehow I forgot to take a photo of Achmed. I'll do so soon; I'm sure he'll be helping me again in the near future.) 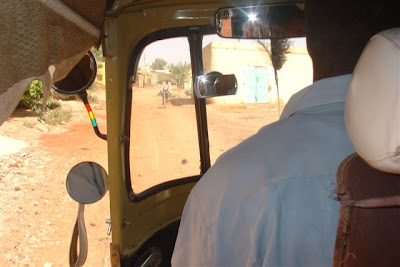 The rickshaw, a 3-wheeled motorcycle, which resembles the infamous tuk-tuk in Thailand, is a common mode of transportation in Khartoum. Popular with the locals and those desperate enough, the fare on the rakshaw is pricier than the local bus but cheaper than a taxi. to explain

Bear in mind that rickshaw drivers are fearless, often driving against traffic and cutting in front of other vehicles when trying to cross a junction. If you are a foreigner, expect to be charged higher and don't be surprised the engine breaks down in mid-journey. I was blessed; this trip was short and in the residential area, so traffic was minimal. 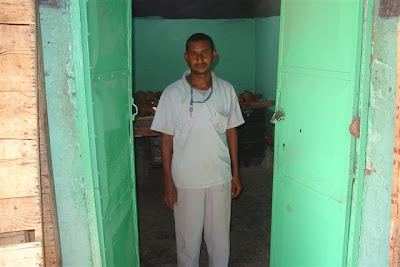 The bakery manager in front of his display of delicious hot pitas
My taxi driver understood English, although he indicated he could only speak it "small-small". Once we arrived at the bakery, he walked in ahead of me and began to rally the staff around for photos. 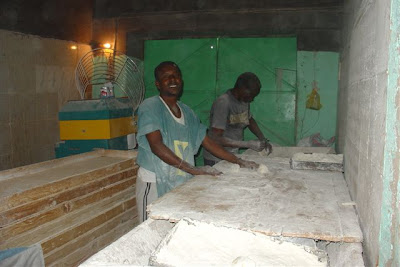 The men who work the dough 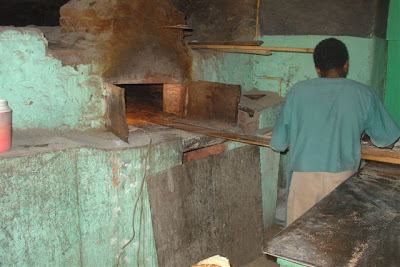 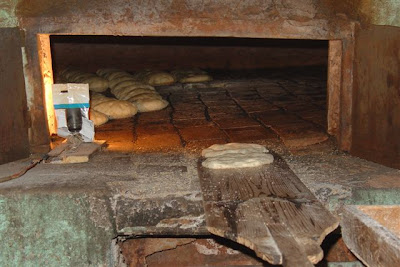 The oven is a lot larger and deeper than I imagined 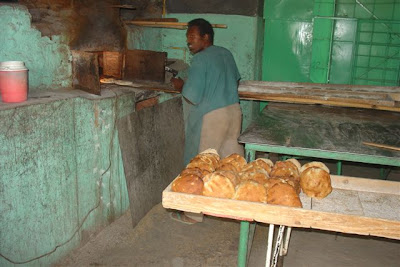 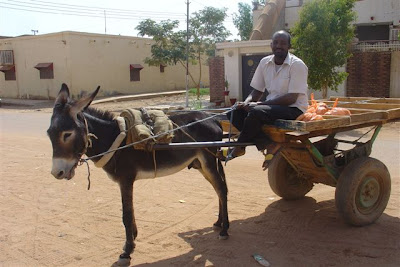 I was thrilled to encounter the delivery man and donkey and asked if I could take a photo
Driving back to the flat with a bag of hot fresh pitas (SDG1/ US$.40c for 5), we met the man with the delivery donkey. Most of his wares had been delivered already. This is another popular mode of transport. A donkey and cart can convey almost anything: humans, fruit and vegetables, milk, pita breads, building materials and bags of grain. I was delighted to see the delivery cart as I'd often seen this same animal waiting outside the bakery with a full load. As we stopped, I asked Achmed, who was waiting outside Mohamed's shop, to ask the cart driver if I could take a photo. He did, the driver agreed and within minutes I had about five passers-by watching and commenting on what I was doing. 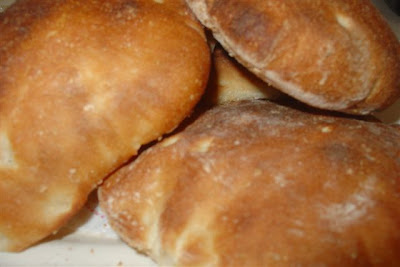 The delicious pita breads are a daily purchase in our house
Once I'd paid the rickshaw driver, I bought a Pepsi for my husband from Mohamed's shop. I didn't want him to feel I was neglecting him! I thanked Achmed for his help and started off across the road. As I reached out to open the street gate, I noticed two beautiful ladies waiting on the corner a few yards from me. I walked back, and sticking out my hand in greeting, I asked if they spoke English. The one lady did, albeit very basically, which is tons better than my Arabic (I'm studying on the computer every evening and also learn a word-a-day on Misalyn's delightful blog which you can read here) She said her was Norma and her friend's name was Waan. They're Egyptian and live in the green building two doors from our flat building. Before they jumped into their rickshaw, she said:
"You come visit"
I will, Norma, I sure will...
Posted by Jo at 4:30 AM