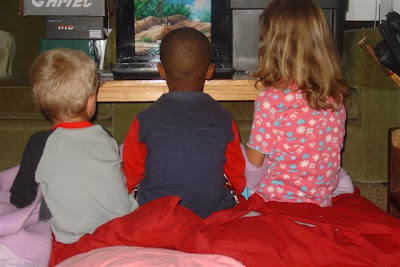 At the beginning of December I posted about a surprise we had for Emily's grandson, Siphiwe (not his real name). You can read about this here)

When John and Debbie arrived back from their holiday at the sea, I showed John the bicycle. I also voiced my concern that, in retrospect, I thought the model I'd bought, was too big for the six-year-old lad. We subsequently asked my six-year-old granddaugther (who, as can be seen in the above photo, is taller than Siphiwe) to "test drive" it. Sure enough, it was definitely too big. As he'd never ridden a bicycle before, Siphiwe would also need one with trainer wheels.

I arranged with the dealer whom I'd bought it from the dealer I'd bought it from, who was quite happy to exchange it for a suitable model. A week into the New Year, Debbie had an opportunity to go to town with the pick-up. She took the bicycle, and brought home the perfect size for this gentle little boy.

Here I need to add that Siphiwe had spent most of his Christmas school holidays at my home becoming firm friends with both my older grandchildren. Before his mum arrived from the city for her biannual visit, he slept over at my home a few times as well. 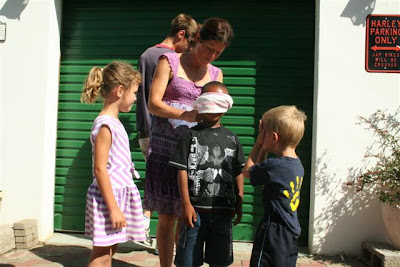 Debbie blindfolds Siphiwe (see three-year-old gs covering his eyes as well!) while John collects the surprise from the garage
Back to the "surprise". On the pre-arranged day, Emily brought Siphiwe to work with her. Daughter, Erica and her little boy, Misani, were also there, but only Emily knew what was about to take place.

Debbie explained to Siphiwe what she was doing while she blindfolded him. My two grandchildren stood by, almost bursting with excitement. I just LOVED that my grandson covered his eyes as well. Don't children just love surprises. These two knew about the bicycle but had kept the secret well. Meanwhile, John opened the garage door behind the litte group and quietly brought the bicycle out.

He placed it on the patio and when Debbie took the blindfold off Siphiwe's eyes, and he saw the bicycle, he first clapped his hands over his mouth, then he clapped his hands. I heard Emily say: "Bua leboha, me" (Say thank you to mama- note; the word "me" = madam/mama is pronounced "mare") Siphiwe thanked me, thanked Tatemaholo (Granddad - my husband was thanked in his absence) and John and Debbie. Then I told him to "palama e-baaisikele" to which he mounted the bicycle with great enthusiasm. Oh how children, especially boys love their first bikes! A real guy thing! (lol) 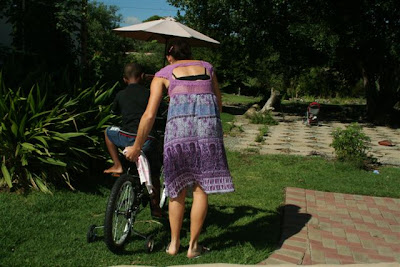 Catching a bit of a speed-wobble at first, Debbie ran forward to guide him. She also turned him back onto the patio and within minutes he was pedalling furiously up the driveway with granddaughter and grandson leading the way. 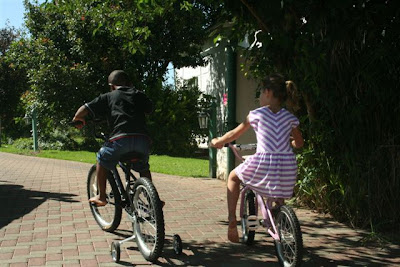 Our 6 yo granddaughter and grandson, Siphiwe, from our extended [Emily] family pedal up the driveway with great enthusiasm 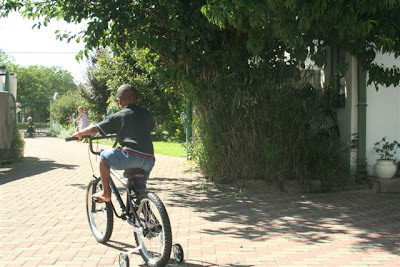 Up ahead at the gate, you can just make out our three-year-old grandson with granddaughter encouraging Siphiwe to come...

Siphiwe took his bicycle home to the township that afternoon. Emily told me she'd keep it indoors as bicycles are stolen at the drop of a hat in her town. I suggested that she always makes Siphiwe bring it indoors so that he knows he is wholly responsible for his prized possession. (He still has to show Tatemaholo how he can ride when we go home on break in March) He also has to guard against older lads in the street who may ask for a ride and hi-jack the bicycle for a day or even for good.

I'm pleased we waited for the right bicycle.