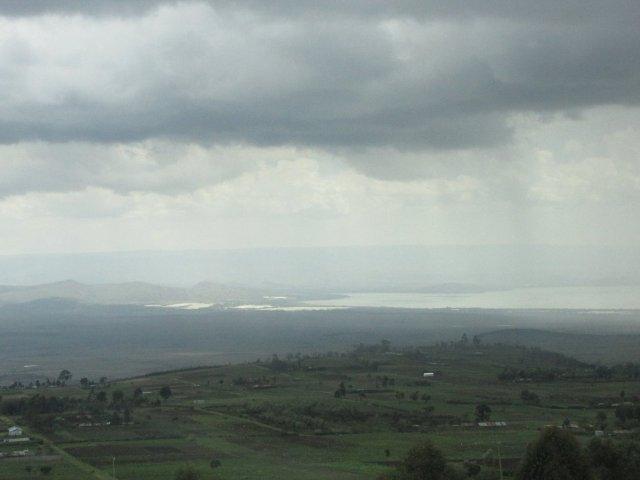 Rain clouds over Lake Nakuru
Travelling to and from Nairobi from the valley where we live, we journey through the Great Rift valley and pass Nakuru town and the lake which bears the same name. From Nairobi, we first pass Naivasha Lake which we hope to visit while living in Kenya. On the way home from Nakuru to the our valley, we always see the signs to Lake Bogoria, a saline lake and Lake Boringa, which is a freshwater lake.
I've just heard from my dear husband that this weekend we'll be going out and will be staying on Lake Boringa on Saturday night, after having visited Lake Bogoria that day. Whoo-hoo!
The Great Rift valley splits into two major troughs. The Eastern Rift is home to the Kenyan Rift Valley lakes, while most of the Central African Rift Valley lakes lie in the Western Rift. The Kenyan section of the Rift Valley is home to eight lakes, of which three are freshwater and the rest alkaline. Of the latter, the shallow soda lakes of the Eastern Rift Valley have crystallised salt turning the shores white, and are famous for the large flocks of flamingo that feed on crustaceans.
Nakuru means "Dust or Dusty Place" in the Maasai language. Lake Nakuru National Park, close to Nakuru town, was established in 1961. It started off small, only encompassing the famous lake and the surrounding mountainous vicinity, but has since been extended to include a large part of the savannahs.

The lake's abundance of algae attracts the vast quantity of flamingos that famously line the shore. Other birds also flourish in the area, as do warthogs, baboons and other large mammals. Black and white rhinos have also been introduced.

The lake's level dropped dramatically in the early 1990s but has since largely recovered.

Lake Nakuru is protected under the Ramsar Convention on wetlands.

Last week more welcome rain fell as we travelled home. I photographed the rain clouds over Lake Nakuru from a moving car but I think you get the picture!

For more beautiful skies around the world, click here
Posted by Jo at 3:30 AM