Where do you go for an outing when you live in paradise? Living in Kimwarer Valley which is peaceful, lush and green after recent rains and many different birds to enjoy, you almost feel as though you don't need to get away! However, while we're here in Kenya, we intend to visit the country and this weekend was the start! We did a morning trip to Bogoria Lake and spent the night on Island Camp in the middle of Lake Baringo.

Entering Lake Bogoria National Reserve a little before 8am on Saturday, within minutes we were driving along the dirt road skirting the lake. I had previously heard about the beautiful sight of the flamingoes in and on the shores of this large body of salt water, but nothing prepared me for the utter magnificence of the scene. 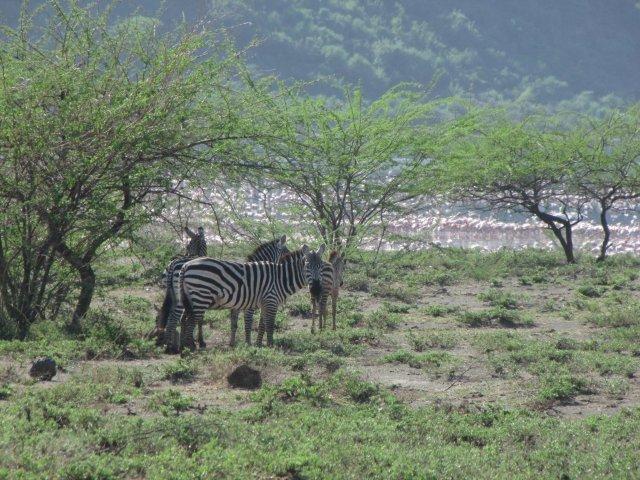 Zebra graze in the open thornveld while the flamingoes on the lake create a beautiful backdrop to the scene
The vegetation around the lake is composed of dry bush, grasslands and riverine forests. Animals can quite easily if you drive slowly and keep your eyes peeled! These include buffalos, zebras, impalas, dik dik (very small species of deer - see photo) . The lake is the perfect spot to see the rare greater kudu. We didn't see buffalo or Greater Kudu but several other antelope and zebra showed themselves. 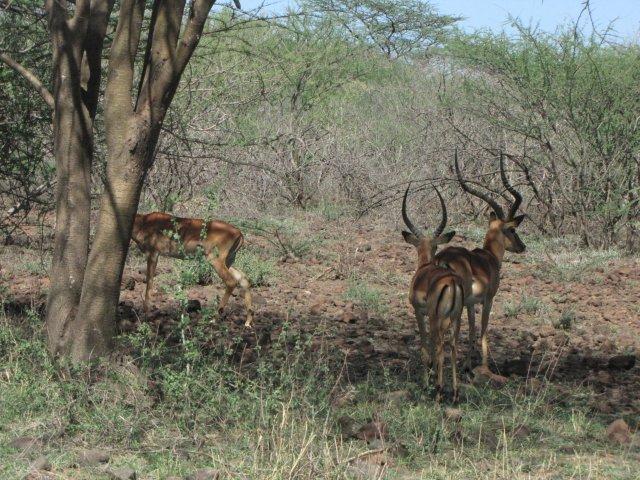 The antelope (male Impala above) either stood in the shade of  bushy vegetation above or... 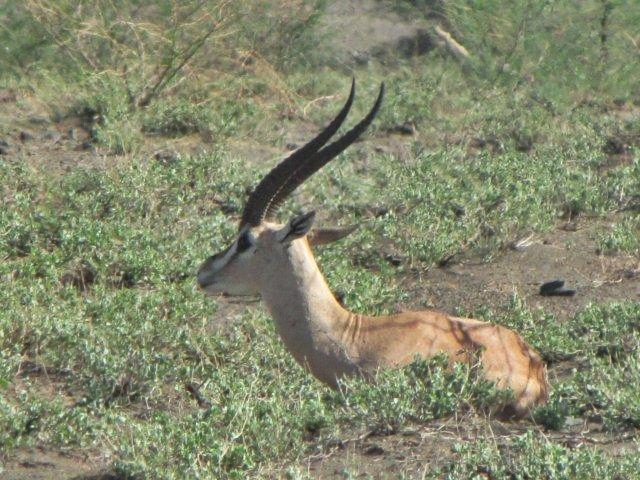 ...relaxed in the open thornveld. This male Thompson's Gazelle was keeping an eye on his small herd of females grazing nearby 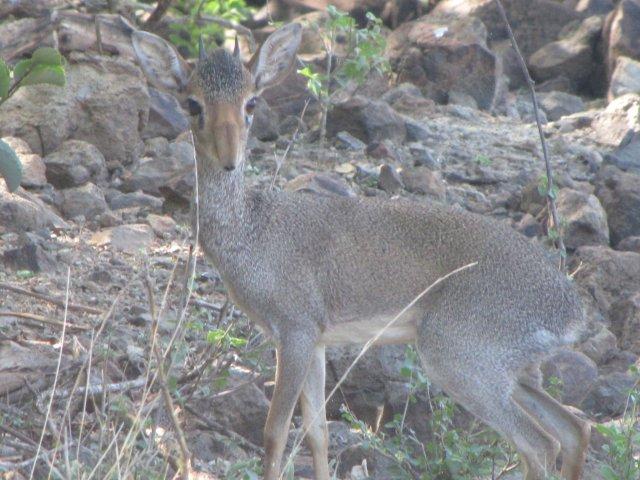 This very small antelope species, Kirk's (Damara) Dik-dik, is being hunted ruthlessly in Africa. Although  previously they'd dash across the road as we travel through the mine, I've never seen more than the back-end of this little fawn disappearing into the scrub.  It was a privilege to see so many in the reserve and to be able to photograph them standing quietly in the shadows 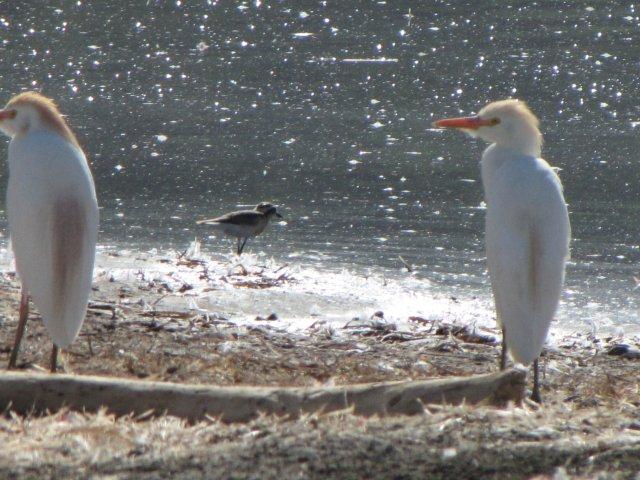 Cattle Egret are found all over sub-Saharan Africa, and despite the name not ALWAYS found in association with cattle and wildlife. The birds above are in breeding plumage, the one on the left more advanced.  I don't have a photo like this and I just had to include it! (apologies, I'm not sure what the little wader in the middle is) 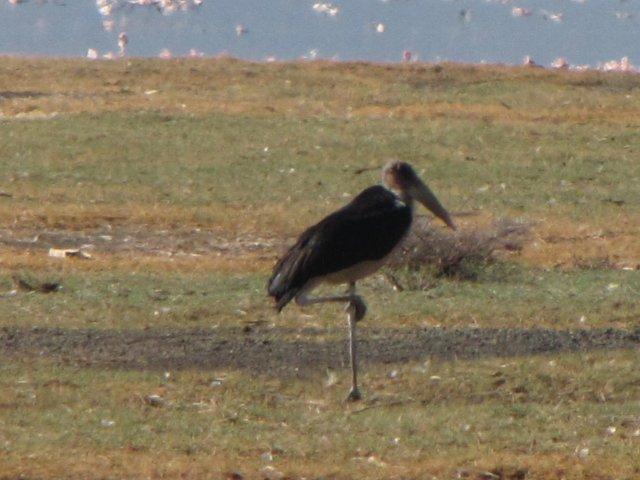 A lone Marabou Stork rests in a stork-like stance!
And now for the stars of Saturday's show at Bogoria! 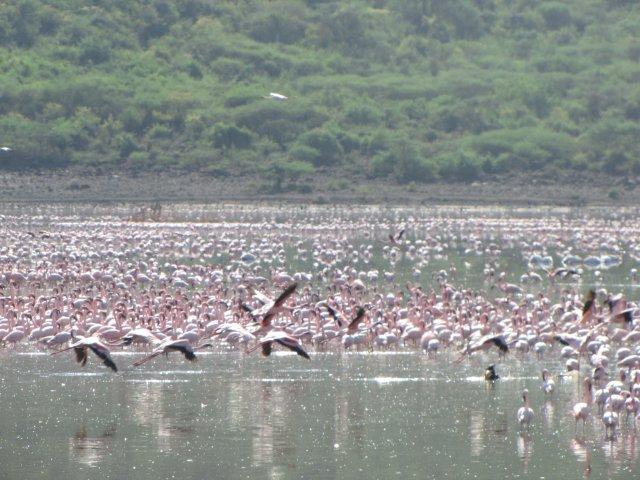 Flamingoes in their thousands, lining the shores, paddling the waters of Lake Bogoria 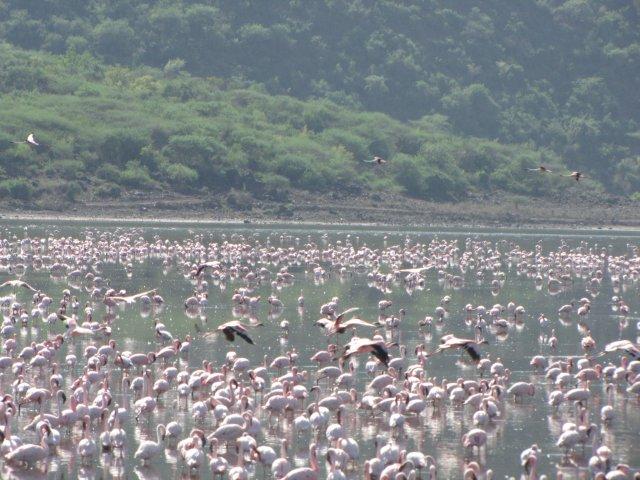 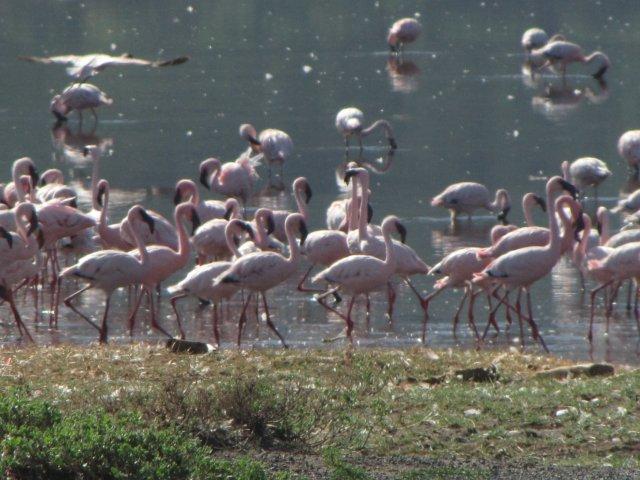 Lesser and Greater Flamingoes occur at the lake. Above are Lesser Flamingoes which are smaller than the Greater Flamingoes. They also have deeper pink plumage and a dark red bill, tipped with black
Due to fluctuations in Lake Nakuru’s level, many flamingoes migrate back and forth between Nakuru and Bogoria in search of better feeding grounds. At times around a million of them can be found in Lake Bogoria where they give a pink haze to the horizon. 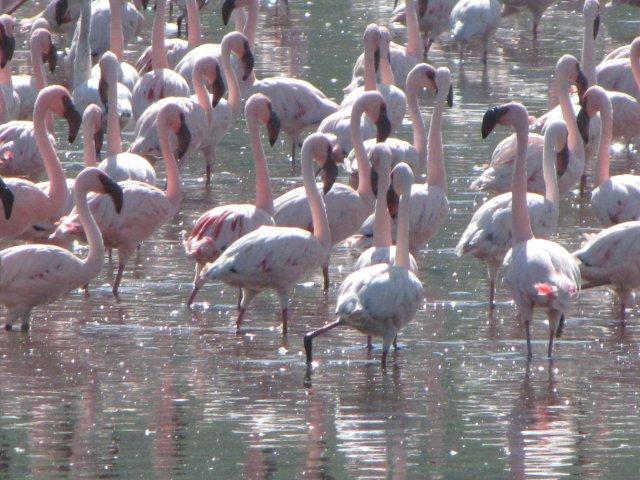 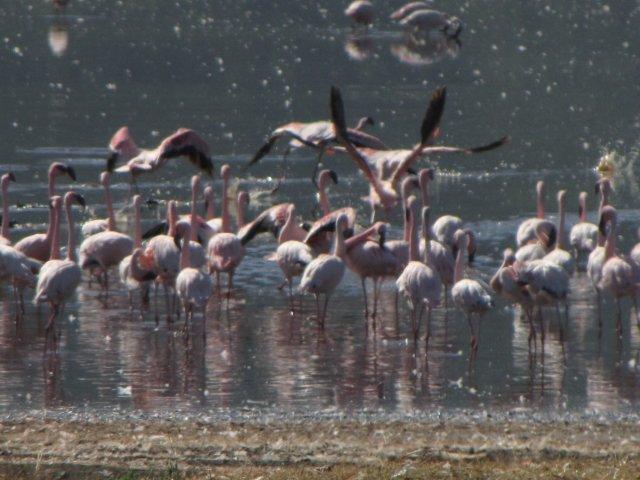 Graceful, beautiful and mesmerizing!
As the title says, it's too much to tell you all in one post. More later about the Greater Flamingoes and the hot springs of Lake Bogoria as well our ultimate night out on Lake Baringo.
For more on other people's worlds, click here
Posted by Jo at 3:30 AM