On Friday morning I woke up and decided to extend the small garden around my bird bath and make it an entirely wild garden. We'd plant it up with indigenous plants and shrubs! Why? To attract birds to the garden, of course!
When Stanley arrived at 7am, I asked him to collect his spade, a large packet and join me. I carried my basket loaded with my camera and had my binoculars around my neck. We exited the camp via the grid gate which is manned by security guards. We were on our way to the reservoir about two kilometres up the hill on the road to El Doret, where there was a huge array of plants growing in the watery ditch beside the road. Walking up the dirt road in the direction of El Doret, we had many large trucks passing us. I wondered if showering and dressing for the day before this exodus,  had been such a good idea!

Each truck that passes when you walk along a dirt road, spews dust all over you! 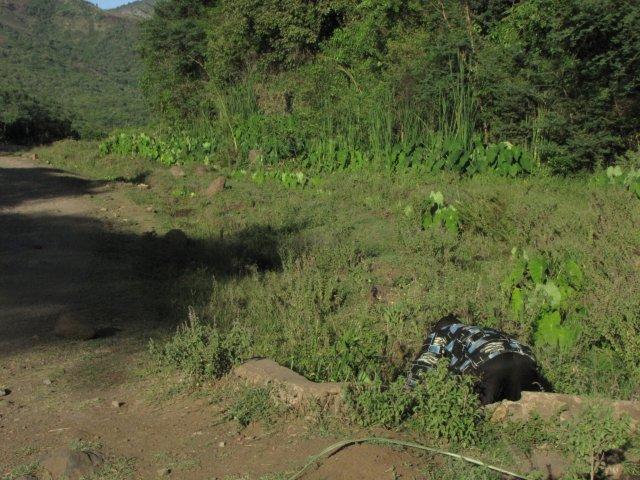 The furrow was so filled with water from the reservoirs that Stanley only had to pull the plants out. No spade needed! I was thrilled to see a clump of Papyrus which Stanley easily pulled out along with some reed-like grass and some smallish tufted grasses 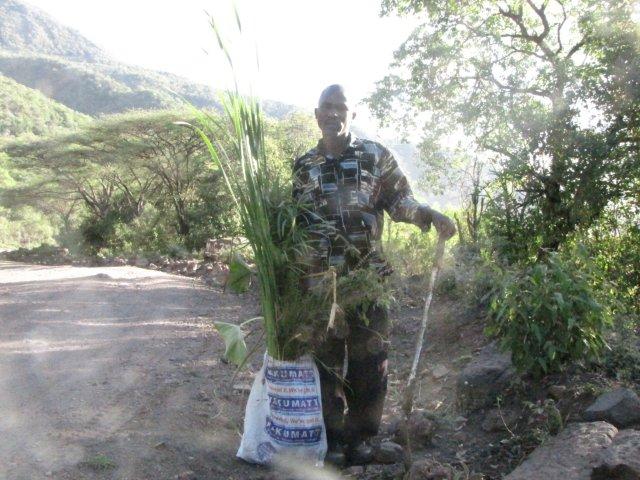 Stanley displays the plants we found up at the resevoir 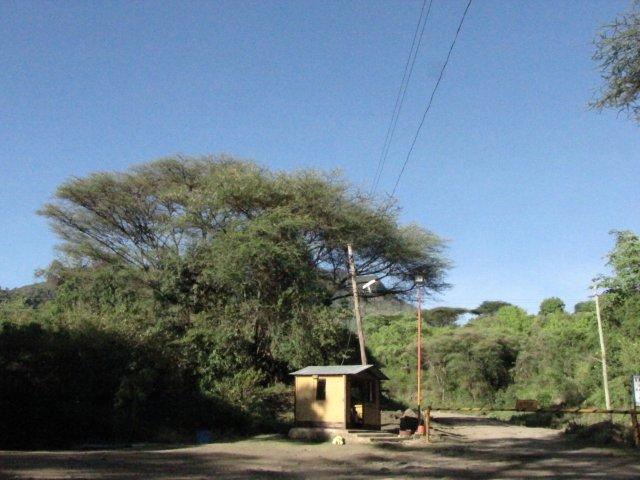 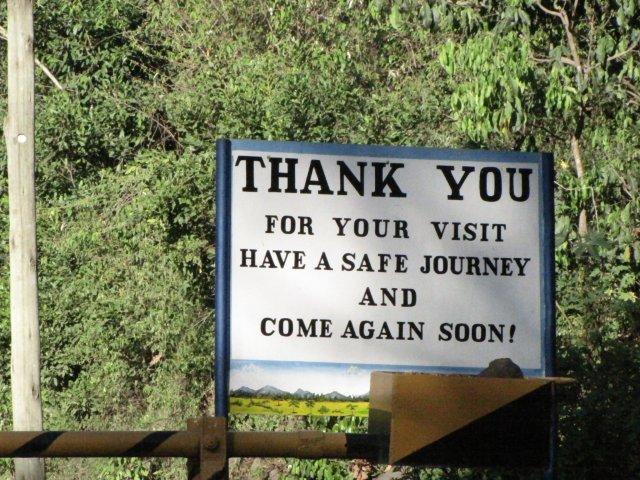 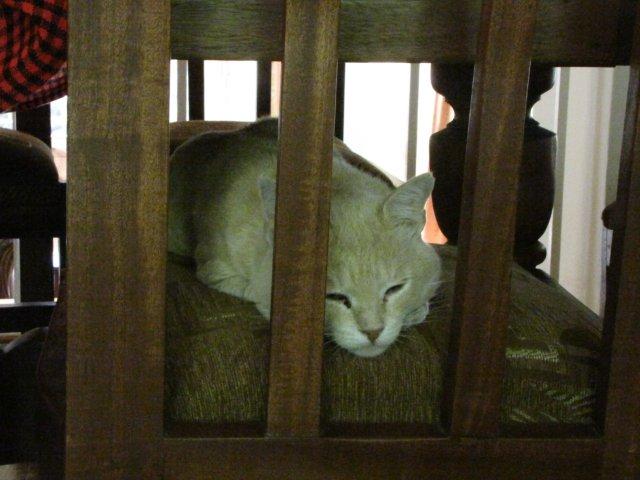 Back home Ginger was exhausted waiting for me to return from my early morning excursion! 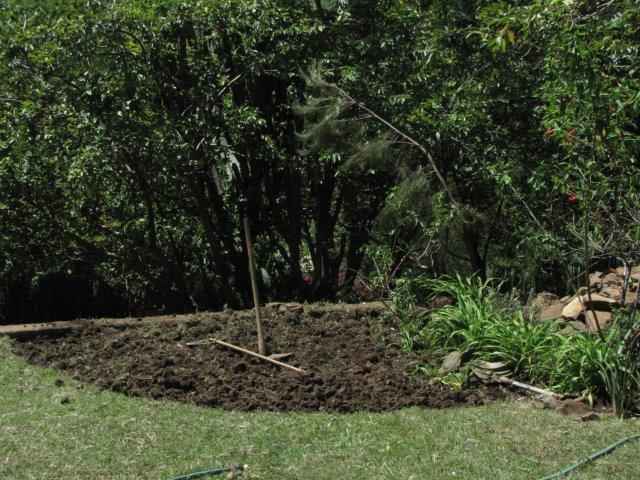 Stanley chopped out the lawn and extended the bed after I had measured it out. He dug it over, added soil from our supply at the bottom of the garden and then brought in four barrow-loads of compost. Then we gave it a good soaking of water and waited until after lunch to plant the bed up 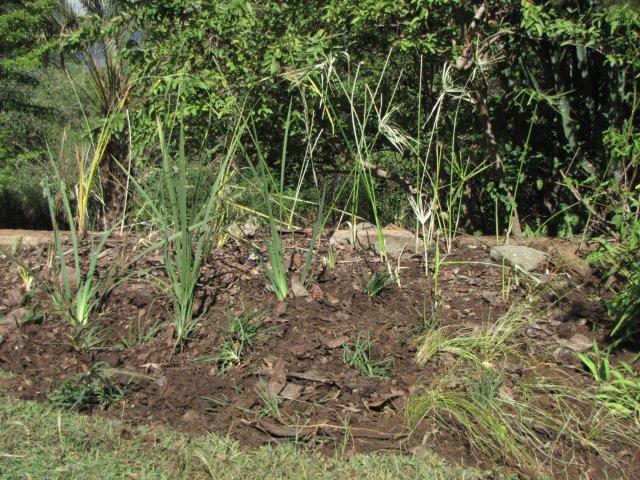 Some well-placed rocks in between, grasses, papyrus, wild iris and bulbines and our garden is on its way! 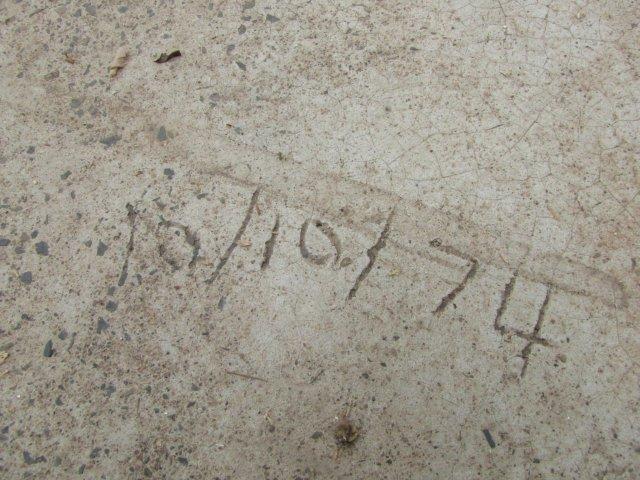 On Saturday morning after doing my normal baking, I took a photo of a date engraved on the patio. The mine has been going since 1969 and obviously the houses were built five years later. I then walked along the lane in search of birds and other interesting sights 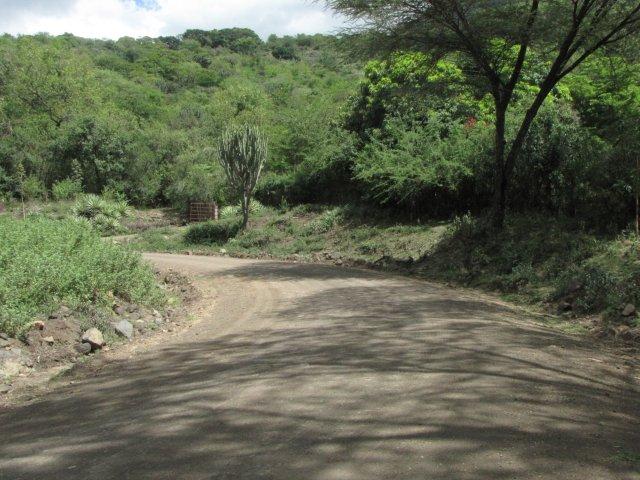 Once again I walked out of the camp gate and up the road, but this time only to the lane above 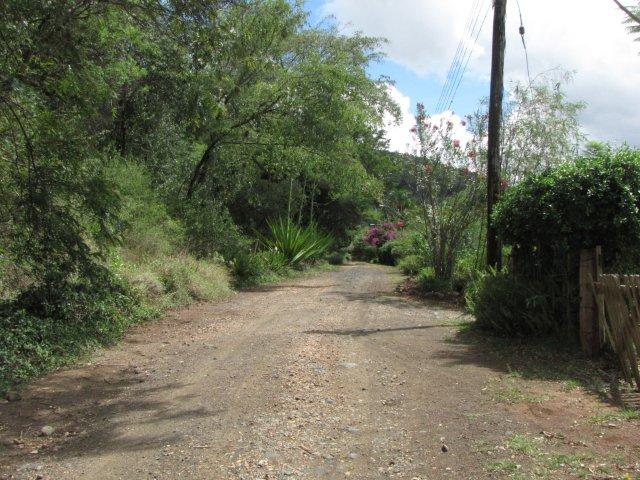 The lane to Sue's house, with the Guest House on the right first. At the end is the mine owner's house and that is where I was headed 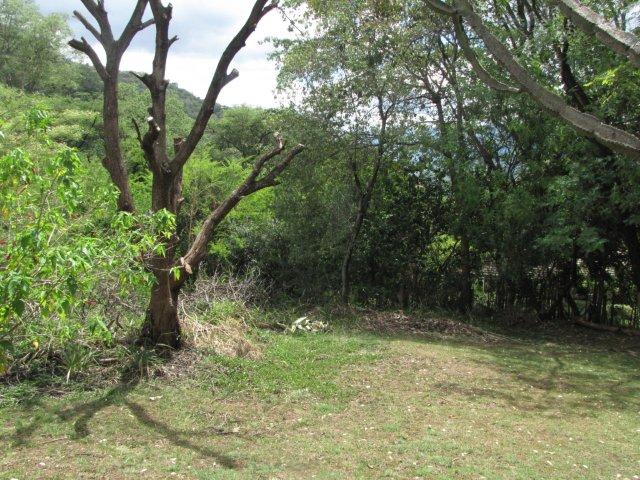 This garden is above our house (just visible through the trees top of photo) and I regularly hear birds in this garden which is part wild - see brush to the left of the photo. This day, however, it was a silent as the grave! Not a bird sighted or heard... 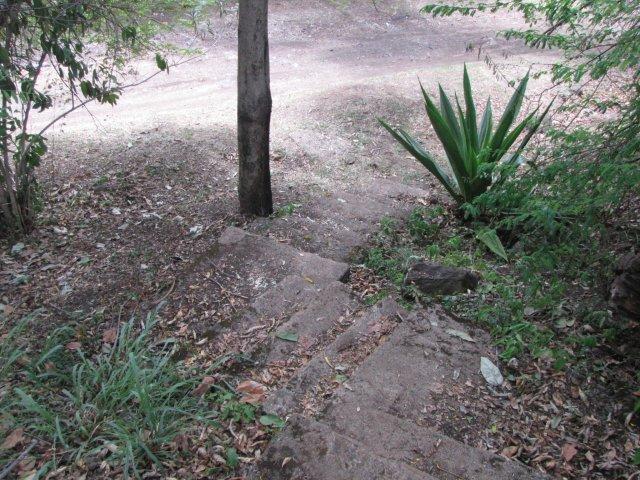 On Sunday morning Grant and I went out birding as normal and spotted two new birds. Back at home again, for the first time since living in Kenya, I made him an English breakfast. Sue had brought me "yellow yolk eggs" from El Doret. This may sound strange as don't eggs normally have yellow yolks? Not always in Africa. The eggs which I buy locally have very pale yolks and don't have much taste at all. They're good enough for baking or binding, but not to eat on their own.
Later that morning,  we walked up to the Guest House where we - along with the whole camp - had been invited to a sit-down lunch. Wheatcliffe and Caro, once again, excelled themselves and put on a wonderful spread: Chicken pie, spinach quiche and a variety of interesting salads. 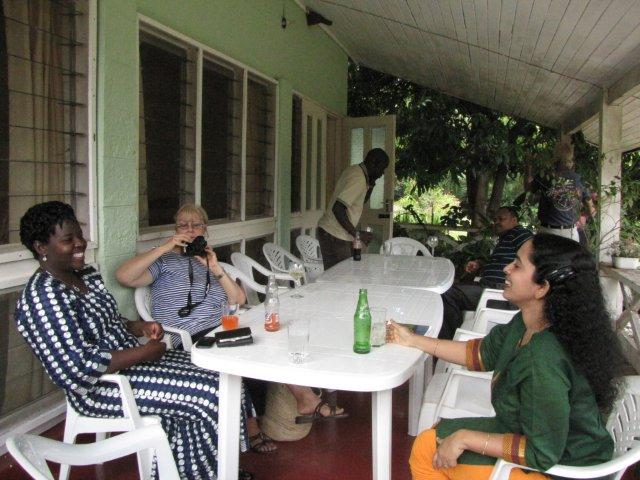 Sue cheekily photographs me photographing the ladies at the table. Next to her is Caroline, Head Teacher of Fluorspar Primary School, and to the right is Shabani, visiting her husband, Jacko who is the production manager on the mine 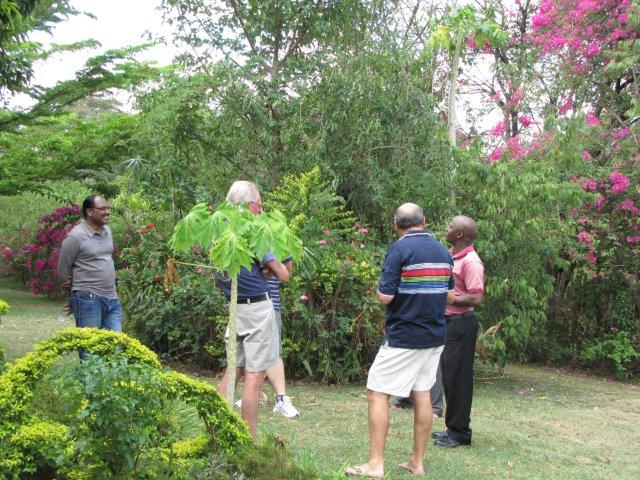 Typically [South] African situation at a social: the women always sit together and chat while the men form a seperate group and talk shop. From left is Kumar, in grey shirt and jeans, whose wife, Sharda was ill and not able to attend;  Grant - back view, with Johan's leg visible beyond that! The MD, Nico, in navy shirt with stripes and Sile (pronounced Seelair), assistant mining manager in the pink shirt
Posted by Jo at 3:30 AM

Labels: Life in East Africa, What did you do this weekend