Friday morning being a public holiday, Grant and I went out to look for birds. Just past the office block, he turned down a road we'd not yet travelled. Within the first hundred meters we spotted birds flitting in and out of the thorn scrub, flying across our path and even some fossicking for insects in the grass verge and sandbathing in the dirt road ahead of the vehicle. At a glance we could see bee-eaters, warblers, brightly-coloured cordon-bleus, mousebirds and crombecs.

We have four different bee-eaters in the valley. I previously posted about the first birds I noticed and photographed when we first arrived on camp, the Cinnamon-chested bee-eaters. Driving around the corner,  we spotted the nesting holes of the White-fronted bee-eaters. They breed colonially in sandy banks and cliffs. 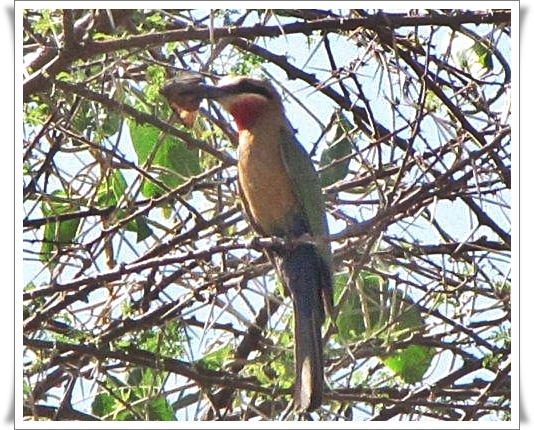 Distinctive features of the White-throated Bee-eaters are the bright red throat, contrasting with the white forehead and white chin and the broad black band through the eye. The remaining underparts are cinnamon, the upperparts are mainly green and the head and neck are golden-brown. The above bird has a meal in its beak and is about to take it to its nest in the bank below 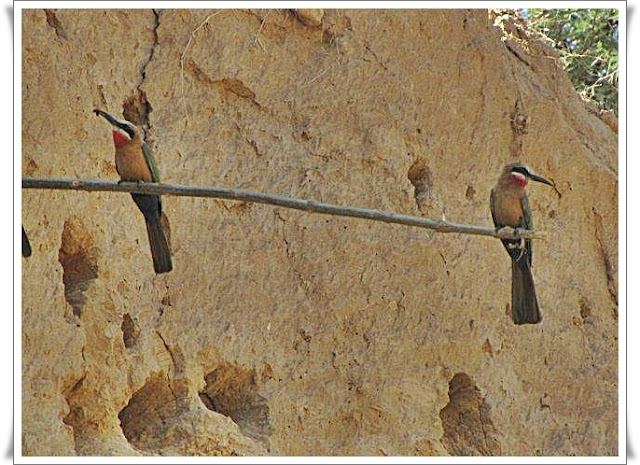 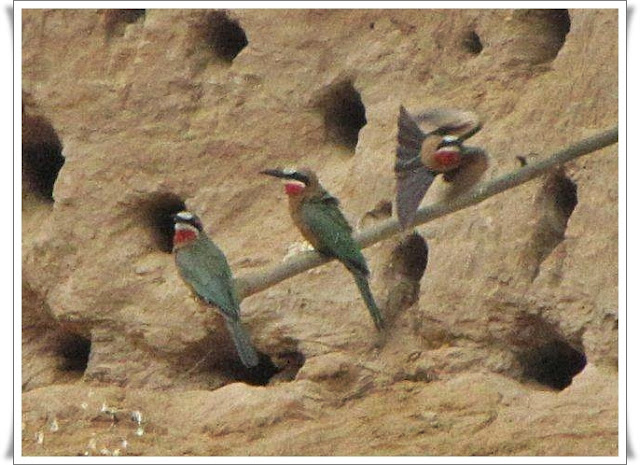 The birds arrive and take off continuously. There are about two hundred holes in this bank and many of them seem to be occupied at the moment 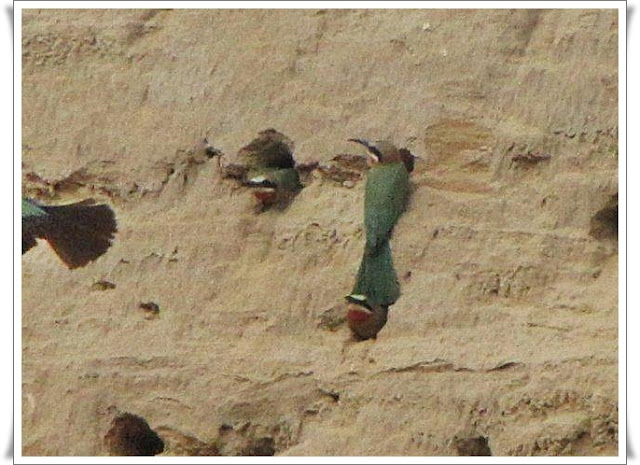 A hive of activity
As we drove around the next corner, we spotted the third bird of this kind; also the smallest and most common: the Little Bee-eater. It is mainly green with a bright yellow throat and black gorget which has a thin blue line running along its upper edge. A distinctive blue line above the eye borders a broad black eye-band. The upper chest is chestnut becoming paler below. The sexes are alike and immature is duller, lacks the black gorget and has a greenish, not chestnut front. 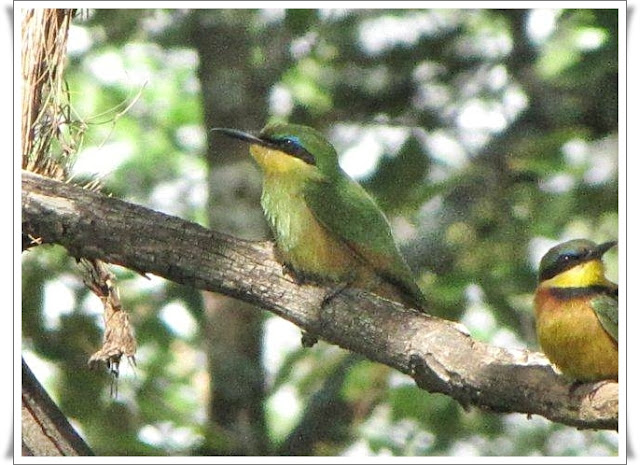 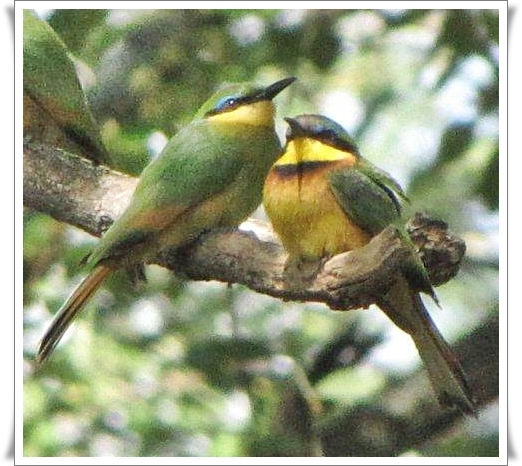 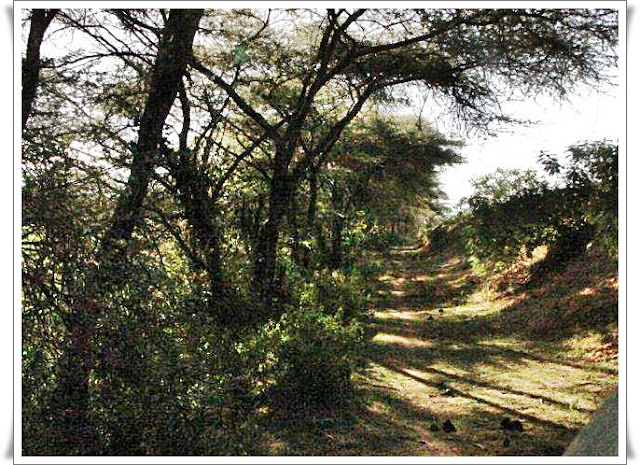 The quiet road we found running along under the dam wall, just rising up on the right, with the riverine bush on the left
As we continued along the road which ran along under the dam wall, we saw a flash of white flying across our path. We stopped and as I got out of the car with my camera, Grant pointed to a pair of Go-away birds in a dry thorn bush beside the road. This is a distinctive, slim-looking grey bird with a white belly and a pronounced crest and long tail. The birds typically anounce their presence by their well-known, draw-out "wah wha wah" call. 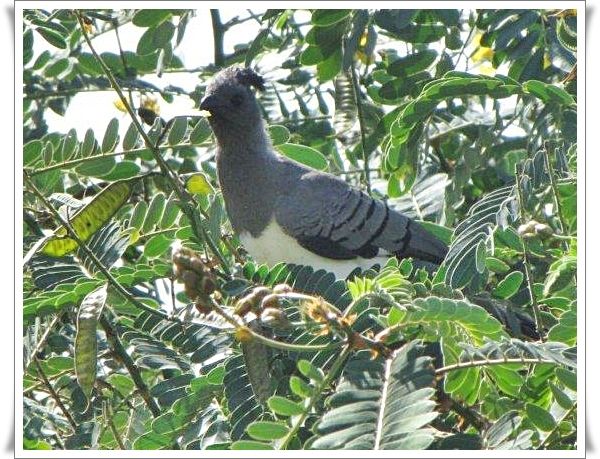 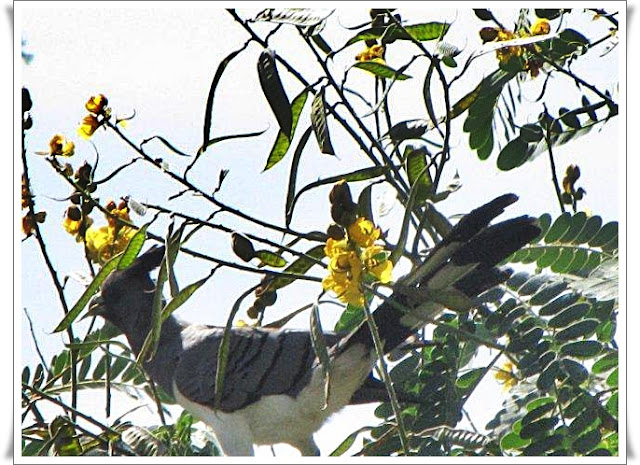 The White-bellied Go-away bird. I just love the stance in the second photo
I carried on walking down the road and Grant caught up in the vehicle. As he got out with the binoculars, I saw a bird fly to a tree and start creeping up the trunk. We both said: woodpecker! We'd been looking forward to seeing a woodpecker here in Kenya and this weekend we got our wish. I managed to get quite a few photos of this industrious and striking little bird, the Nubian Woodpecker.
I often assume that I'm photographing a male bird . However, when I downloaded the photos later and checked on the description in my little photographic guide: Birds of East Africa, I saw that the male has a red crown and a red moustachial stripe. The female has a white-spotted black crown,  a small red patch on the nape and a dark, slightly spotted moustachial stripe. The Nubian Woodpeckers spotted breast seperates it from the very similar Golden-tailed Woodpecker which is streaked. 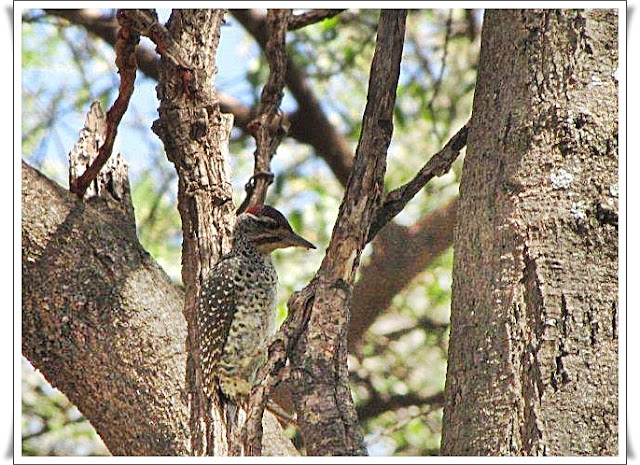 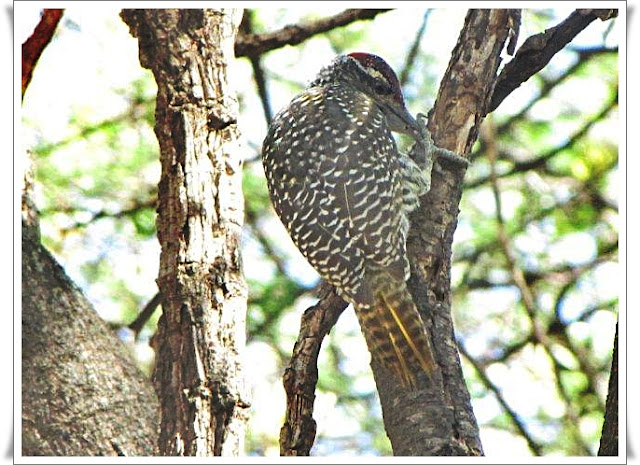 While photographing the woodpecker (above), another beautiful bird landed in a tree slightly lower down towards the river. This distinctive bright yellow bird, an African Black-headed Oriole, has a black head and throat and a coral-red bill.  It is a common bird, one which I hear daily in my garden, but not that easy to always spot. At last I had the perfect opportunity to photograph this bird. 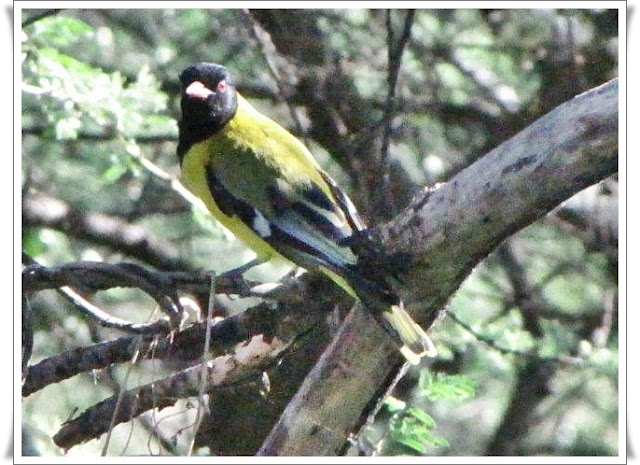 African Black-headed Oriole
As if we hadn't had enough excitement out in the bush, when we arrived home, I spotted two little birds on the ground at the bottom of the garden. I watched them for a number of minutes until one  flew up onto a branch above me. 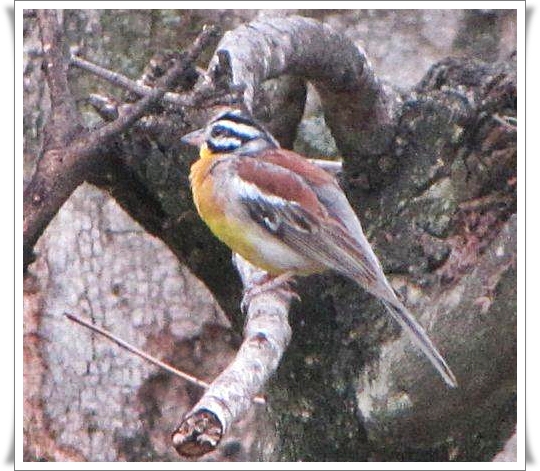 The African Golden-breasted Bunting. This is a small, long-tailed bird with a conspicous black and white striped head, a rich golden breast and a yellow belly. The back is rufous and it has white wing bars and white tips to the outer feathers. These birds are found singly (Sue had announced seeing one fleetingly in her garden two weeks ago)  or in pairs - as I had in my garden- and in open woodland, savannah and acacia bush - the latter habitat surrounds my garden
For more on birds around the world, click here
Posted by Jo at 3:30 AM