Weekend away in Kenya

Can you remember what you did over the weekend of 2-3 April? Gattina of Writer Cramps hosts this fun meme.

As mentioned in my post on Saturday, we travelled out of the valley to spend the night on an island in the middle of Lake Baringo. I will post about our lovely day and night out in tomorrow's post. Suffice to say now it was FANTASTIC!

As usual a trip to anywhere in Africa (and in South Africa) is part of the exciting outing. Well, that is how Grant and I feel about travelling, anyway. We love to stop along the way (in SA it's normally by bike) and take in the sights, sounds and experiences. I, of course, love to take photos of everything.

When we got to the top of the mountain, Michael stopped and I tried to capture the beauty of the valley we'd just left. 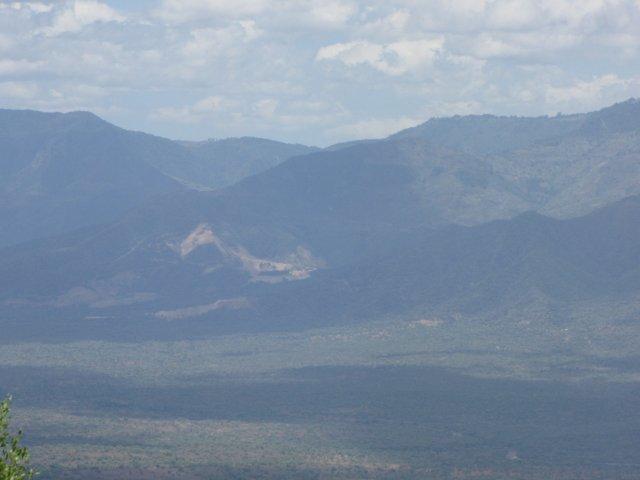 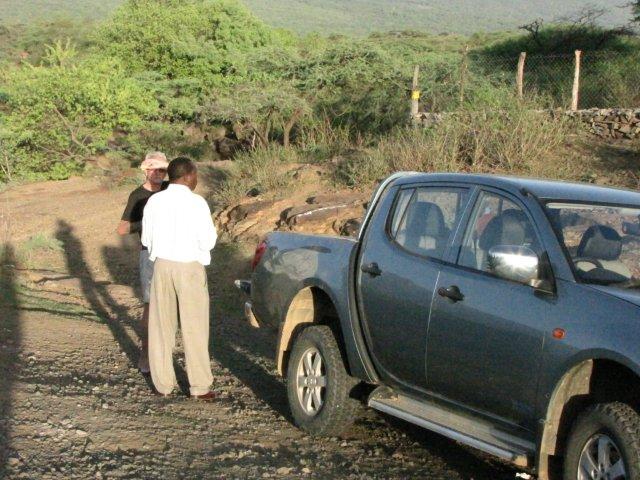 We stopped on the main tarred road and it was time for breakfast. This time as padkos/"road-food"  I'd made cheese puffs and fruit scones. Grant made a flask of perculated coffee 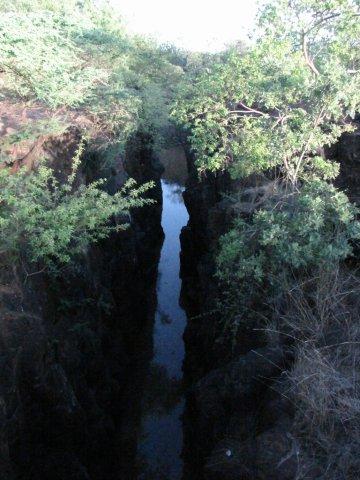 As we turned onto the main, beautifully tarred road. we crossed the Kimwarer River, which runs past the mine office and on through the valley 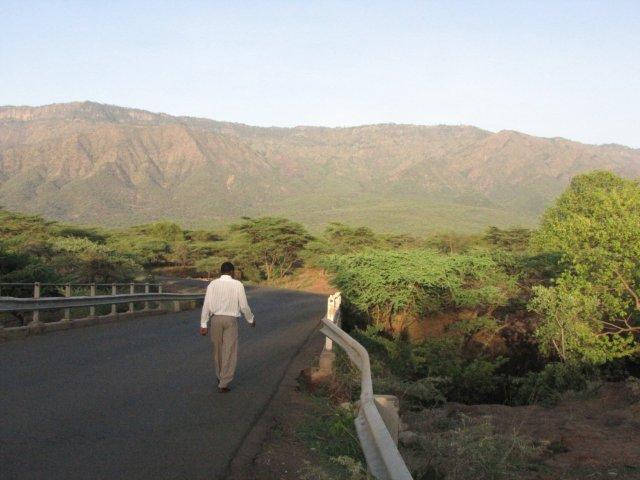 Above Michael calls me back to the bridge to take photos 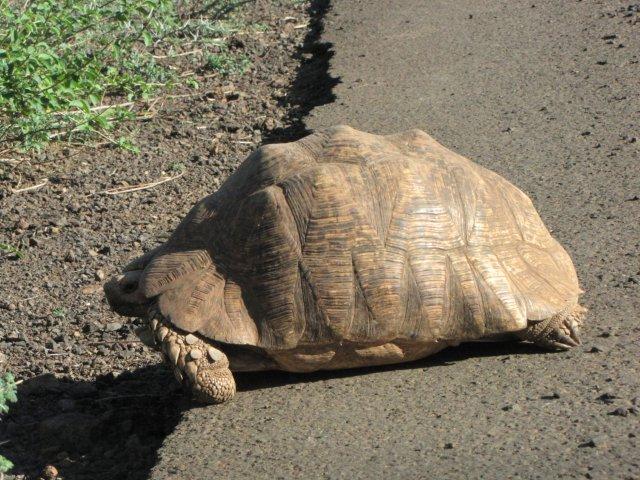 Michael stopped so that I could photograph this Leopard Tortoise crossing the road
The Leopard tortoise (Geochelone pardalis) is a large and attractively-marked tortoise which has a wide distribution in sub-Saharan Africa, including recorded localities in southern Sudan, Ethiopia, Kenya, Eastern South Africa, Zambia, Botswana, Namibia and Angola.. This chelonian is a large, grazing species of tortoise  that favours semi-arid, thorny to grassland habitats. It is, however, also found in some regions featuring a higher level of precipitation, although some leopard tortoises have been found in rainier areas. In both very hot and very cold weather they may dwell in abandoned fox, jackal, or anteater holes. Leopard Tortoises do not dig other than to make nests in which to lay eggs. Not surprisingly, given its propensity for grassland habitats it grazes extensively on mixed grasses. It also favours the fruit and pads of the prickly pear cactus (Opuntia sp.), of which there was an abundance along the road above as well as succulents and thistles. It grows to quite a respectable size, with adults reaching 16 - 18 inches (40 - 50 cm) and 40 pounds (18 Kg). Large examples may be 60 cm (over 2 feet) long and weigh about 80 lbs. They generally have a life span of 50 years. 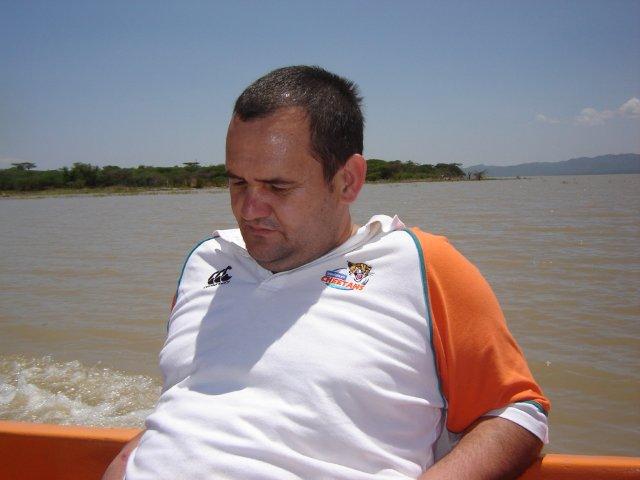 Johan, one of Grant's collegues has never gone out to any of the lodges even though he's been working here for more than two years. Here he relaxes on the boat as we're ferried from mainland Baringo to the Island Camp 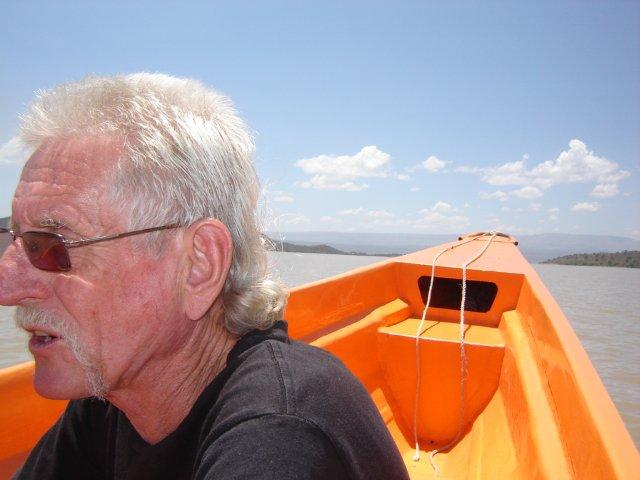 Grant, at 60, is very excited to be visiting a Kenyan hotspot for the first time! 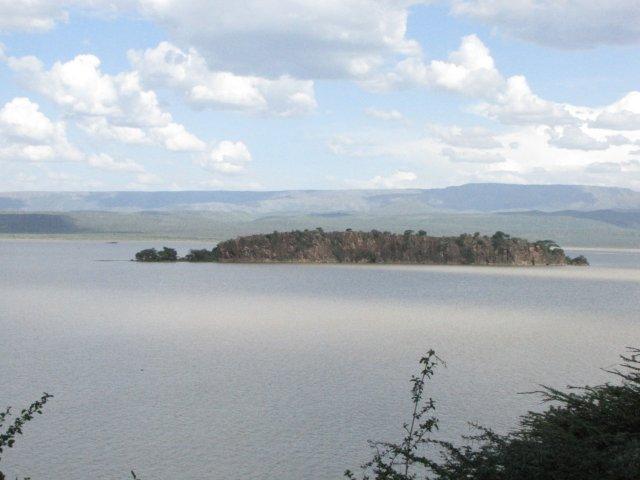 The view from our tented accommodation on the island. More, much more tomorrow!
For more on what other people do over the weekends, click here
Posted by Jo at 3:30 AM

Labels: Life in East Africa - travel, What did you do this weekend