On Saturday we took part in our fifth Parkrun event. It's been going for eleven weeks in Winterton and at the start the organizers announced that two people who have not miss ONE race,  were elderly brothers Anthony and John Muirhead!

As always the social scene is one of the most enjoyable aspects of this event. 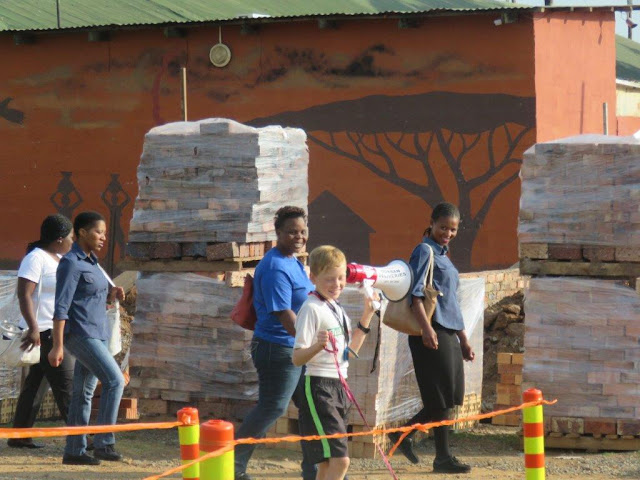 The eatery,  where the Parkrun starts and ends, owner's son welcomes the
staff over the loudhailer causing great mirth among the ladies! 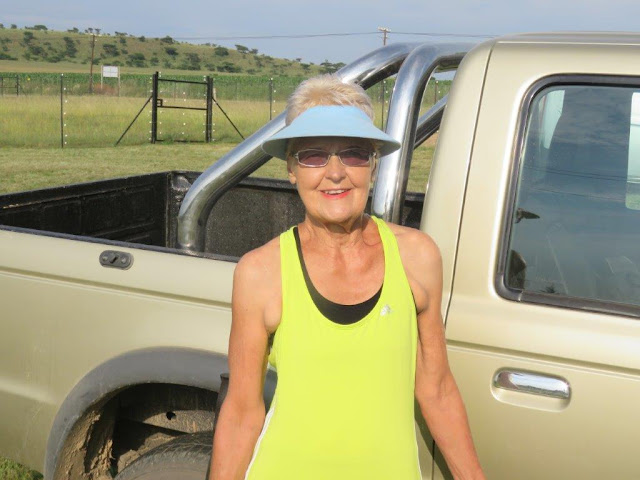 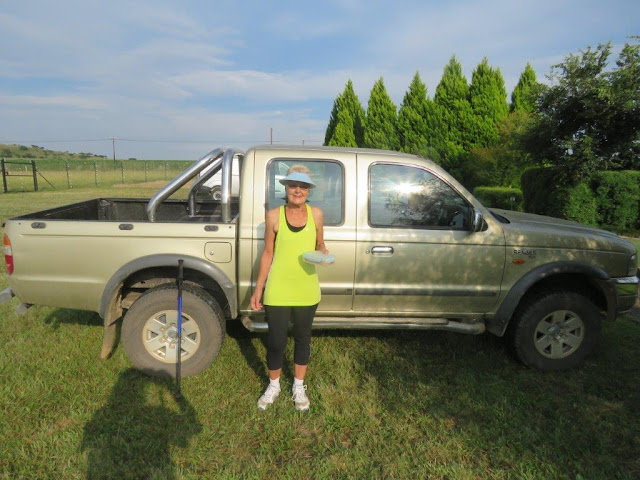 I normally take a Tupperware of homemade rusks for the volunteers. They order coffee from the eatery as the race starts

As we waited for the start, we met a lady who has had a house in the valley for the past 15 years. Mary, who comes from Benoni, Johannesburg - and visits her mountain home most weekends - was thrilled to locate the Winterton Parkrun on the Internet. 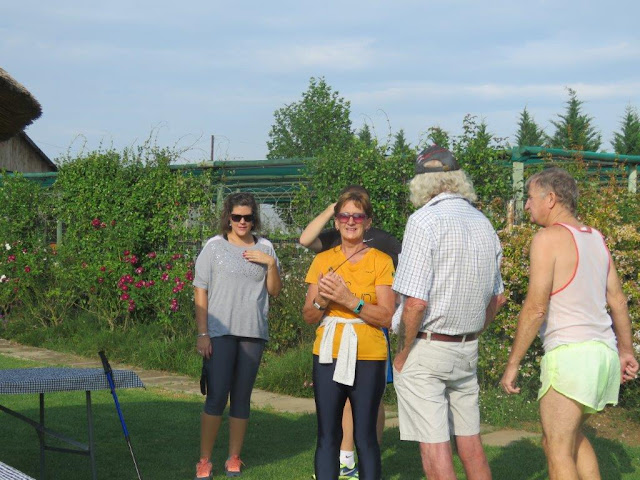 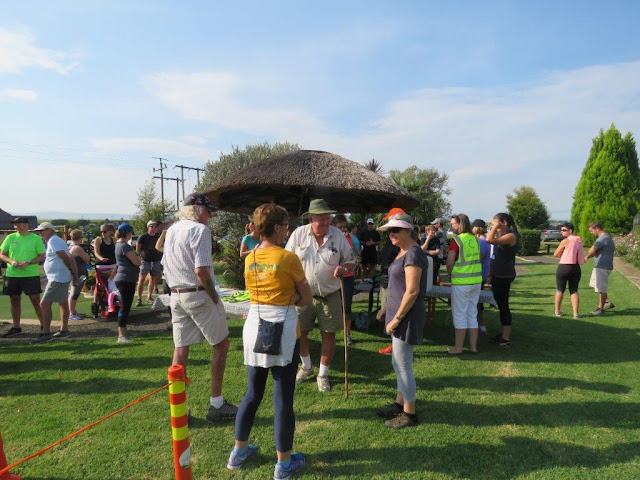 A few minutes later, John (Grant's walking partner) and Jenny - whom we know from the mountain hikes - joined us 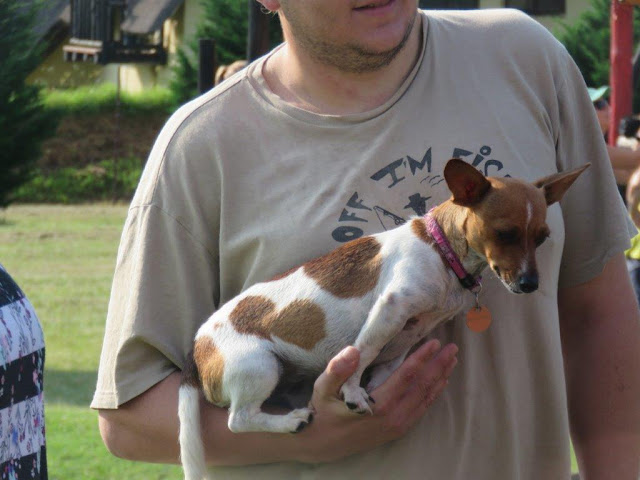 As usual, I zoomed in on our furry four-legged contestants... 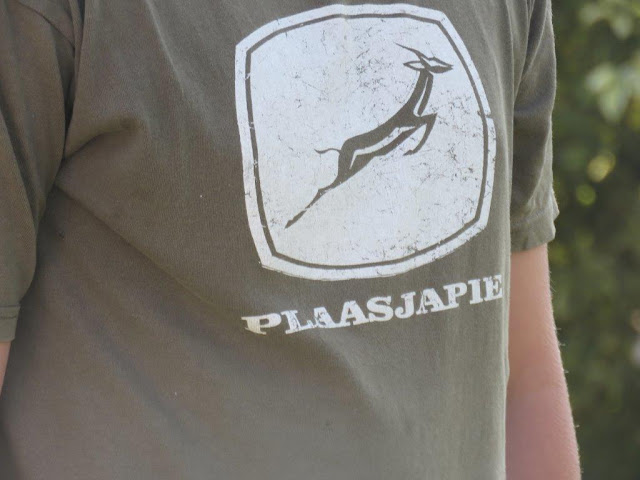 ...and interesting T-shirt logos like this one: Plaasjapie means Farm Boy 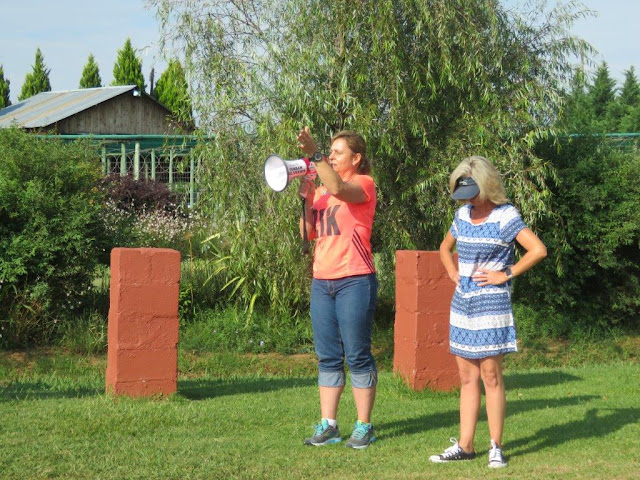 Ezmarie welcomes everyone to the Parkrun (Diane, eatery owner stands by) She also announced that the run would take place in reverse 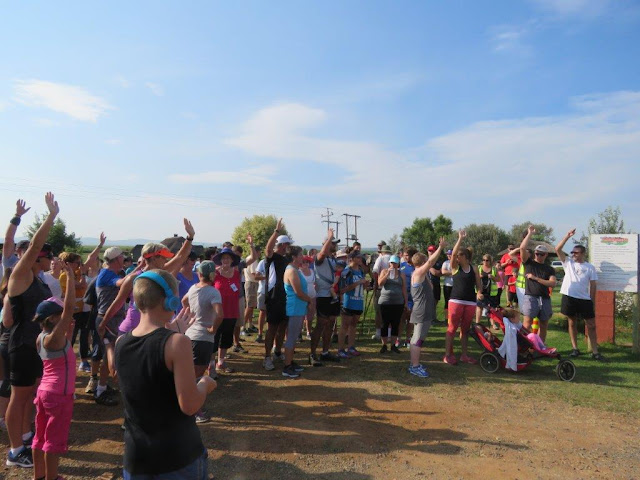 When she asked who were visitors that day, a large number of people put up their hands! 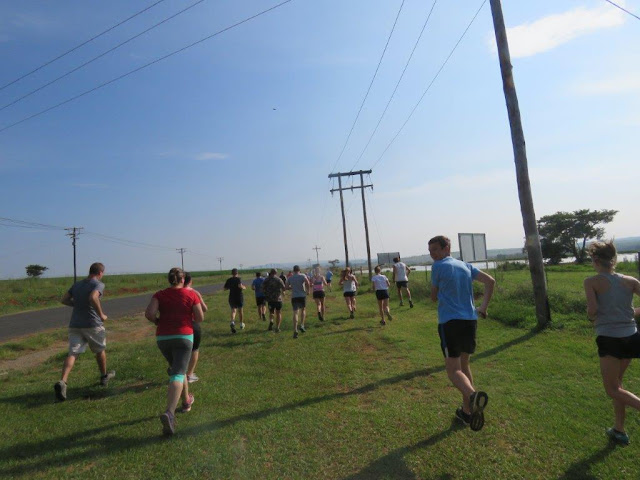 I was determined to better my previous week's time of  48 min 43 sec. So I set off in earnest! 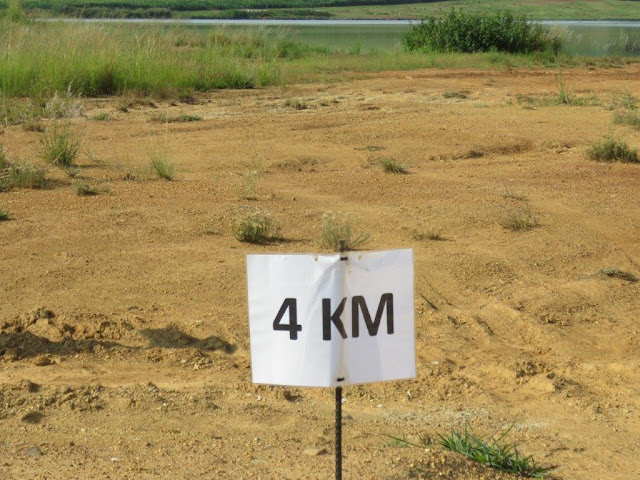 After the first kilometer (which was at the 4km mark!), I checked my camera clock: I'd done it in eight minutes 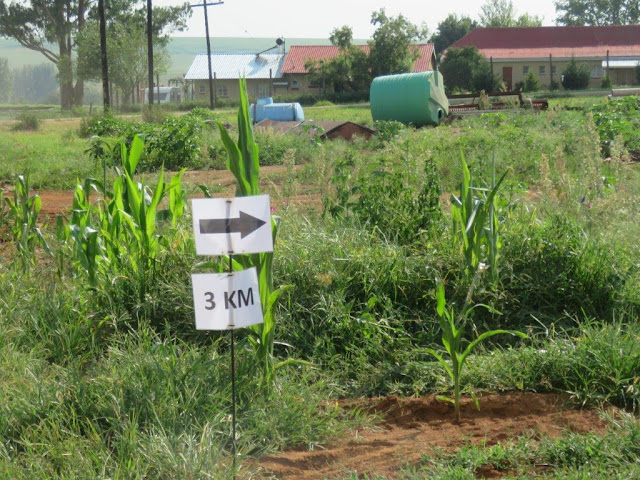 The sun was already high in the sky and by 3 km (second kilometer of the run)  I'd used up another eight minutes!

Between the third and second kilometer mark, we strode across the dam wall - and a slight downhill. 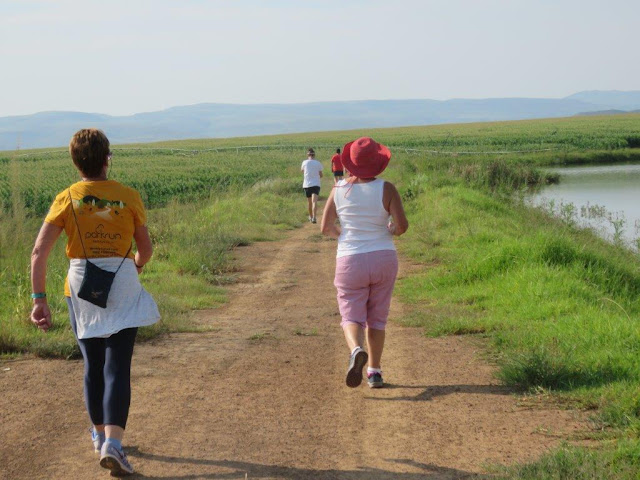 Mary passed me on the dam wall - a strong walker by all means - and Les, our local pharmacist, jogged on ahead 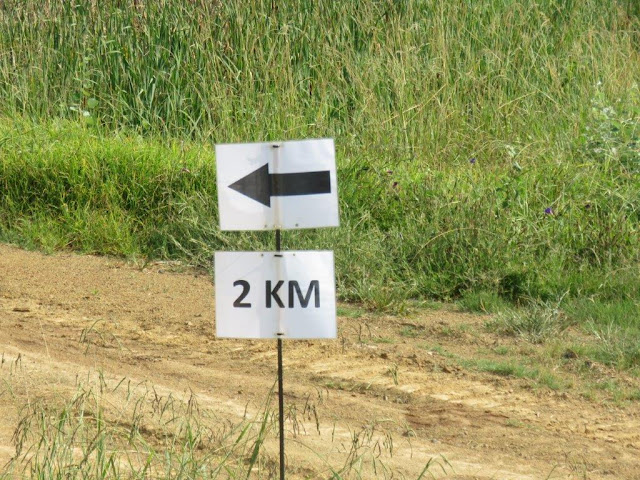 I'd taken another ten minutes to reach this mark 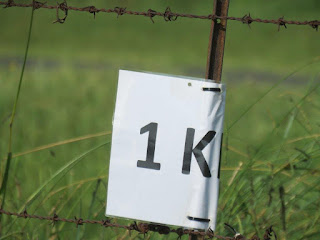 At 1km, another ten minutes had passed!

On the final home stretch I walked behind a couple. The young woman was pushing a pram with a four-year old AND a two-year-old in it. I calculated that she was pushing a weight of at least 13kg! She told me that they come from Port Shepstone on the South Coast and were up in the Berg for a wedding that afternoon. What a pleasure to take your little girls along on an outdoor pursuit while you exercise.

Passing this young family, I saw the race end: I quickly glanced at my camera time and saw that another ten minutes had elapsed. 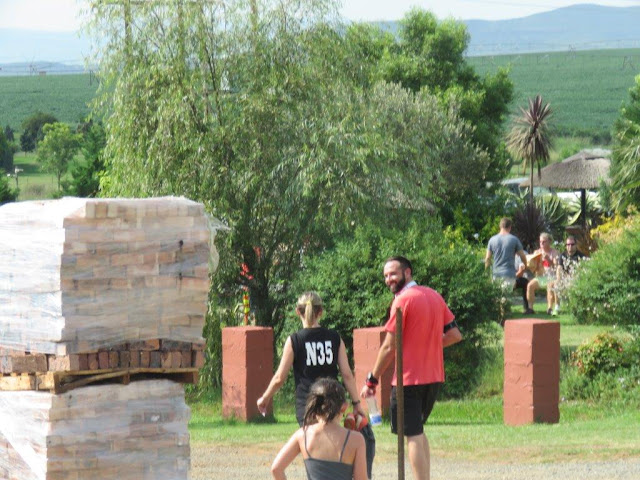 Amid cheers and encouragement from the volunteers clocking us in, I handed my card over to be scanned. As I passed Diane with her stopwatch, I asked my time: 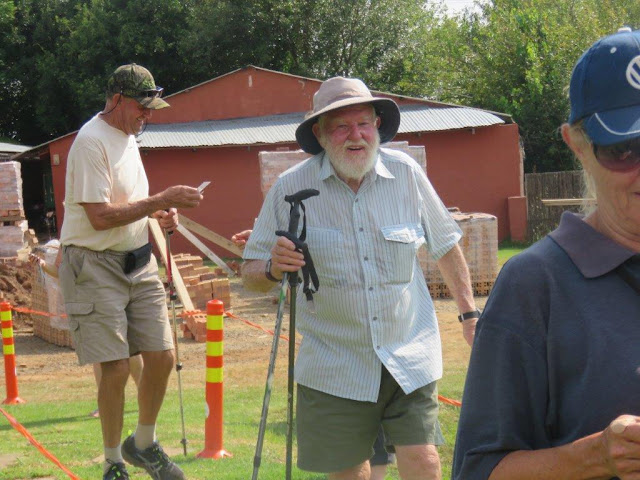 After an ice cold drink at the water station, I walked back up the route to see Grant and John come in. 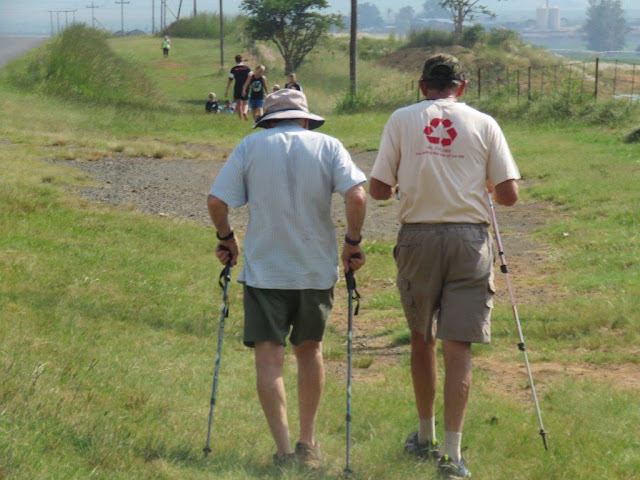 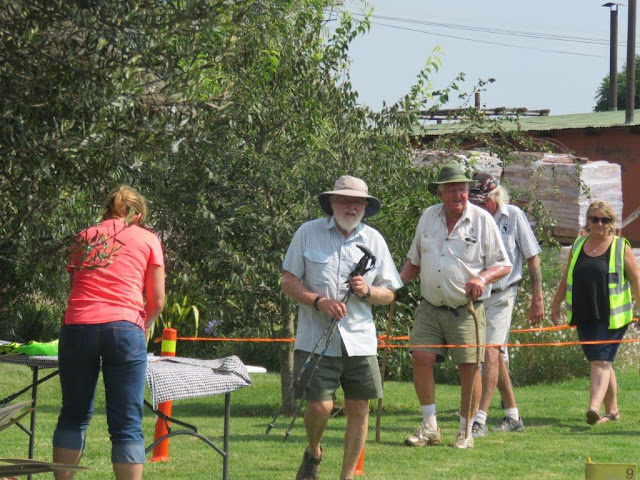 For those beautiful people who follow and read my blog, thank you for putting up with me as I compete against myself in this wonderful event every week. THANK YOU!

Have a wonderful Thursday!