Biking to the Flowers of Namaqualand, South Africa Part VIII

After leaving Mossel Bay on Monday afternoon, we continued on the N2 to Wilderness National Park where we spent the night in Ebb and Flow camp. 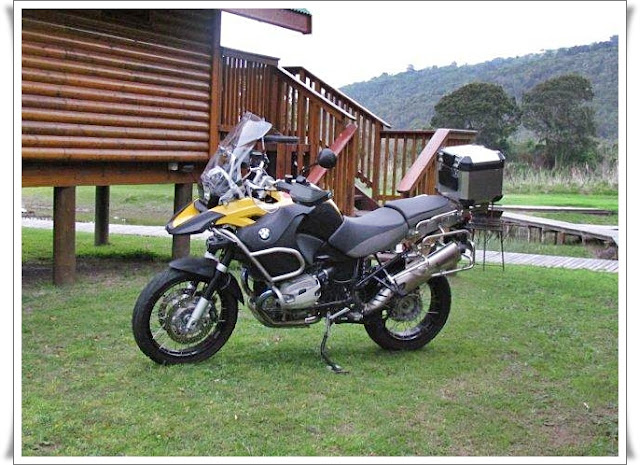 Our en suite log cabin, had a small kitchen inside, with a fridge and eating area on the deck. It's fronted by the river which ebbs and flows according to the tide, hence the name of the camp
Later that evening, we met up with friends, Rudi and Nazette and had dinner at a seafood restaurant called The Blue Olive. Rudi worked in Grant's team in the Namibian diamond mines during the nineties and with his first wife, Rene, we all became firm friends. (Sadly Rene died in a motor accident in 2009.) In 2007 - 2008 Rudi worked for Grant in West Africa. He now works in the DRC (Democratic Republic of the the Congo) and was home on his three-week break.
It was the first time we'd met the [new] lady in his life. Nazette, who has an Arab father and Moroccan mother, lived  in Belguim until five years ago when she moved to South Africa. She teaches French classes in George and because Rudi'd told her I learnt Arabic while living in Khartoum, she insisted on speaking to me in that difficult language. Fortunately she spoke slowly and put up with my shaky grammar and accent! (LOL!) As you can imagine, we had a fun evening.

Rudi and Nazette; Jo, Grant and Rudi (my camera setting was on manual and came out all yellow!)
The next morning Grant and I wandered around the beautiful park looking for birds.  The Touws River runs through the park emptying into the sea about a kilometer away. 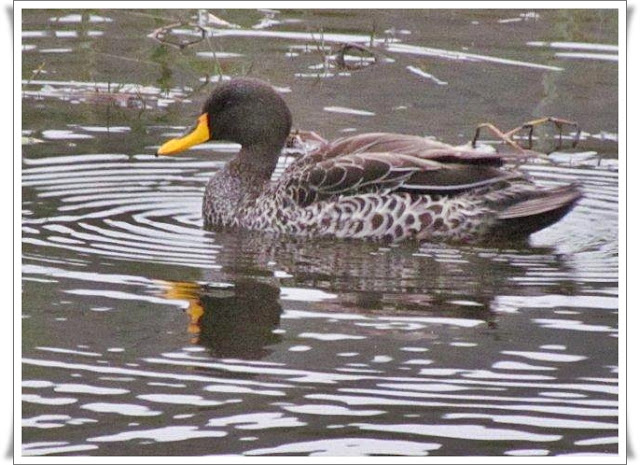 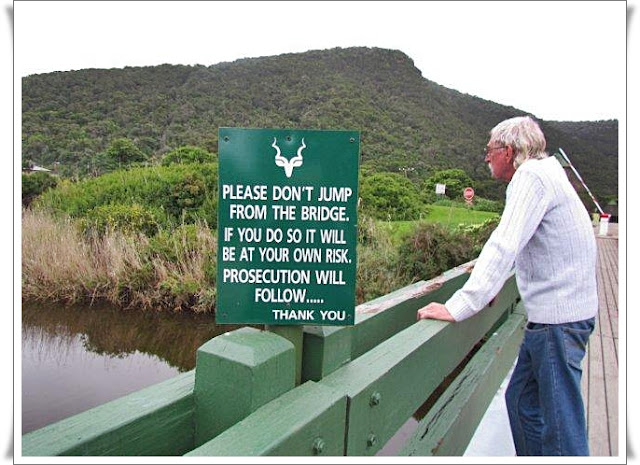 Jump, Forrest, jump! (or not!)
Mmm. Is "prosecution"  waiting to jump in after the perpetrator? 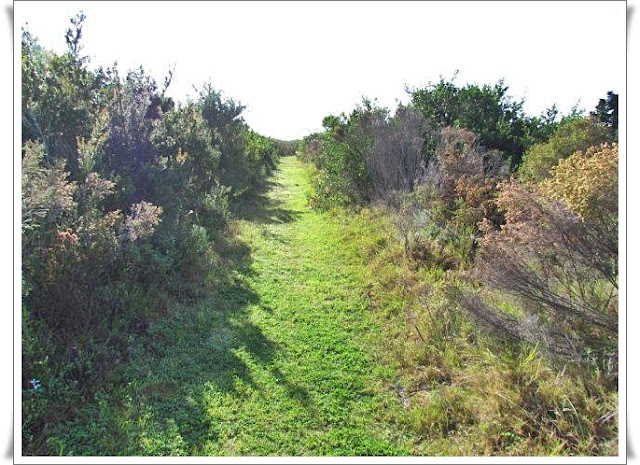 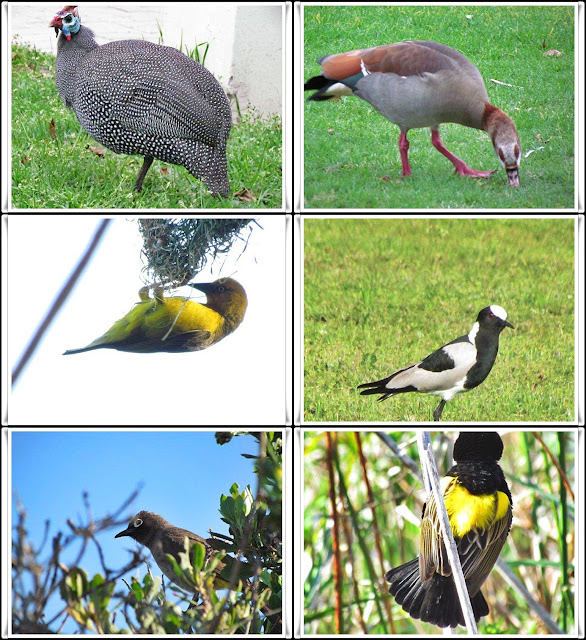 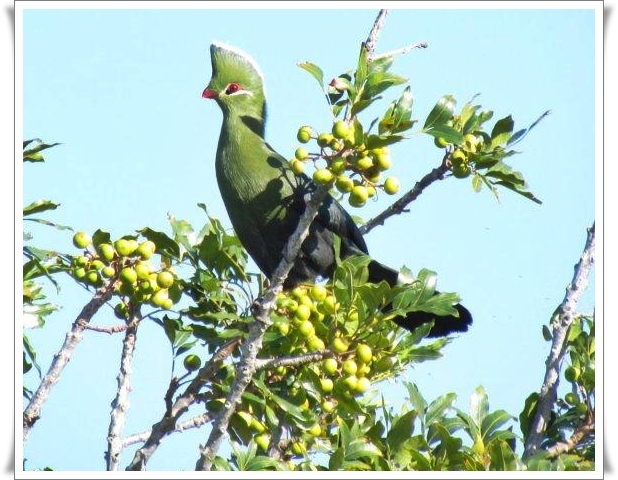 The camp and accommodation is immaculate. The lawns, fields and edges along the main road leading to the camp, were a mass of Gazania regens, (Creeping Gazanias)  The gardens around the Parks Board offices and resource centre, were filled with indigenous plants. I forgot to photograph any of these!
After a relaxing couple of hours of birding, we loaded the bike and left. We've been coming to Wilderness National Park for many years and will return again.
Now our ride took us on the N2 heading east up the coast with the sea on our left and passing little coastal villages with lagoons running into the sea. 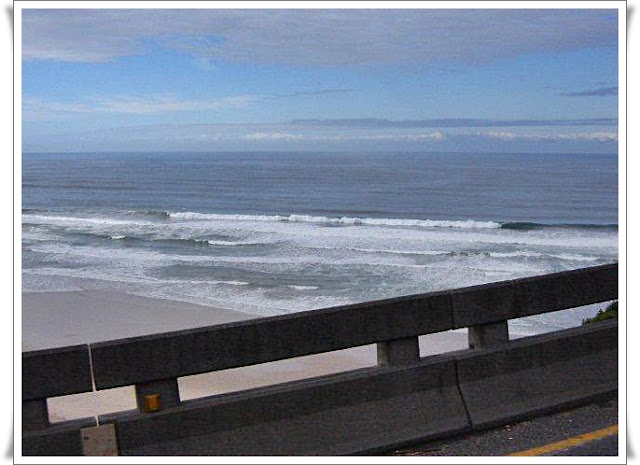 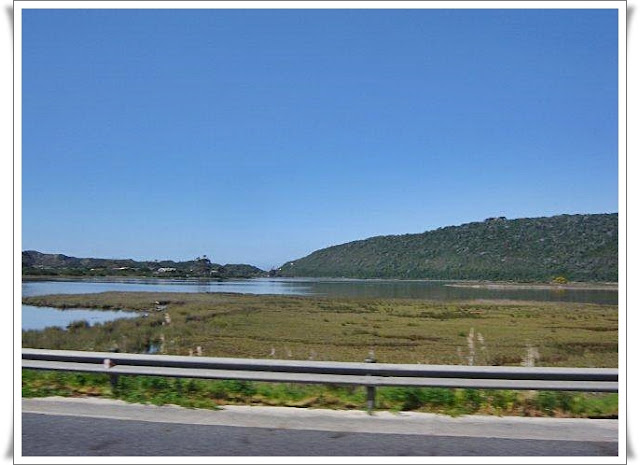 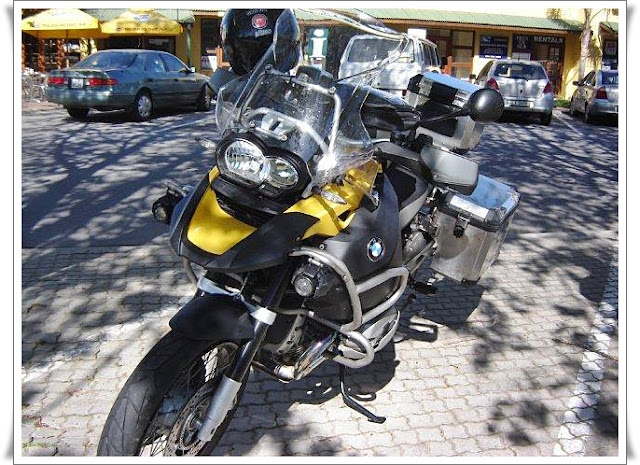 We stopped for tea and a scones at one of the villages
Our next stop was Knysna where we were staying at friends, Pete and Mart in their beautiful Guest Lodge. Grant and I have known Pete for sixteen years, suffered with him through a difficult divorce but now enjoy a wonderful friendship with him and Mart, his beautiful [new] wife-of-seven years.
Mart wasn't in when we arrived;  she was at a show in a neighbouring town. Pete, Grant and I drove down to the Knysna Keys for lunch. The men headed straight for Oyster World where they enjoyed a dozen tasty molluscs while catching up on news from the past year.  (Pete lived in Marquard for many years before moving to Knysna in 2005) Pete also rode a bike for many years but has since gotten rid of it as Mart doesn't ride with him.
I had vegetarian spring rolls with guacamole on the side. Afterwards I wandered around taking photos. 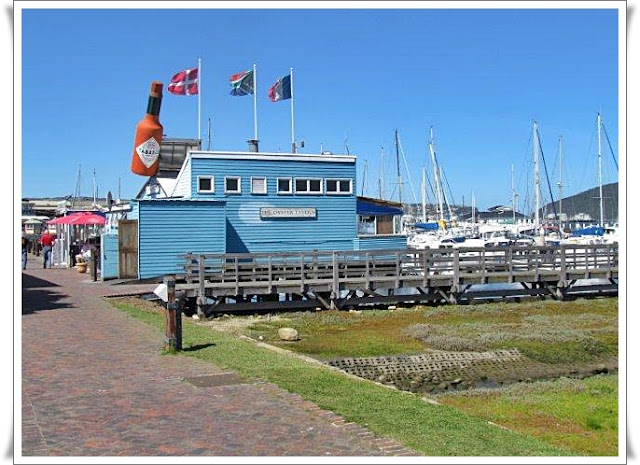 No seafood should be eaten without Tabasco Sauce! 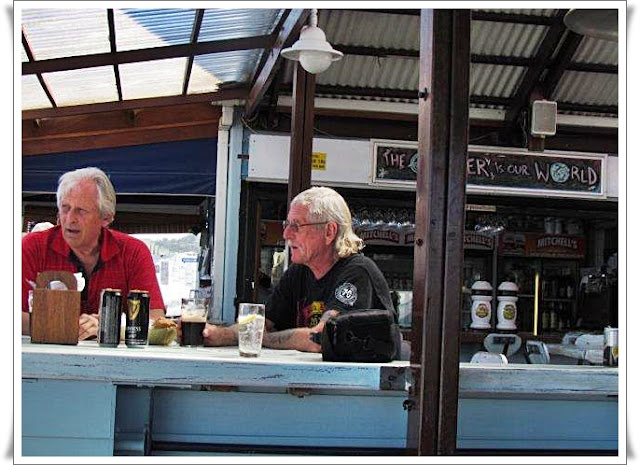 Two old bikers deep in conversation (If they read my blog, which they don't, they'd lynch me for calling them "old" lol!) 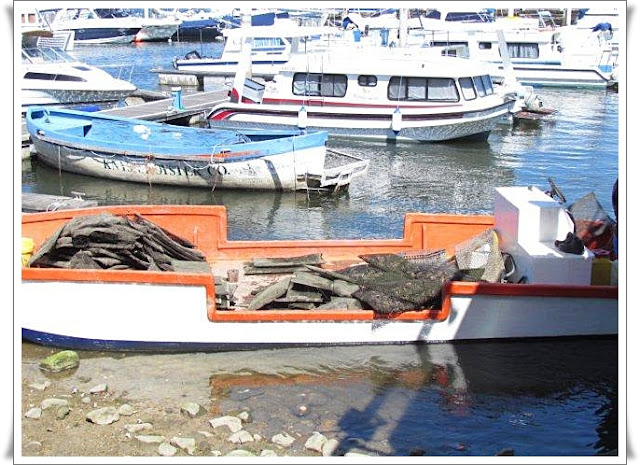 How much fresher can the oysters be? 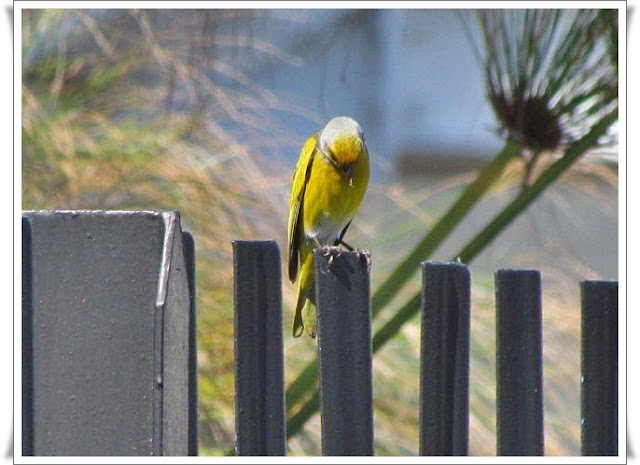 A Cape Canary on a wooden fence post
Mart arrived home later that afternoon. Pete barbequed  a  flattie (spatchcock chicken); as a side dish he sauted large mushrooms and made  Greek salad. A hot crusty loaf of bread completed this simple, yet satisfying supper which we enjoyed while chatting and laughing about old times. 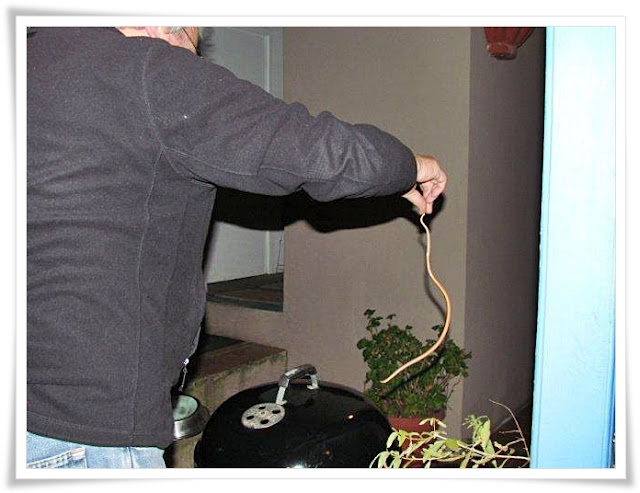 A Common Slug-eater slithered into the courtyard where we sat and chatted while Pete barbequed the chicken (Note: with me and Mart around, NO harm came to the snake which isn't venomous; Pete took it into the large garden and released it) 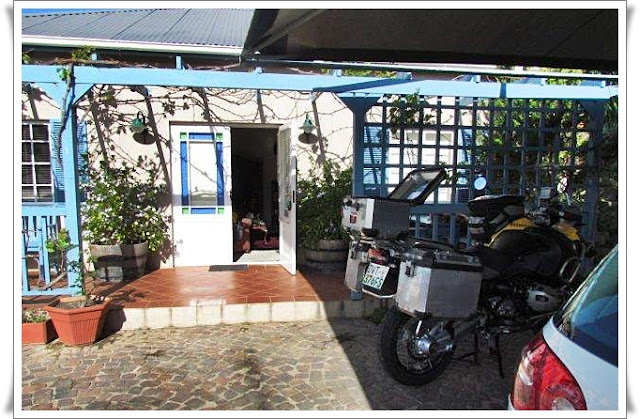 The next morning, Grant loaded the bike while I took photos (well, somebody has to do the job!)
Pete and Mart's Guest Lodge is very French Provencal, right down to the cat posing on the table... 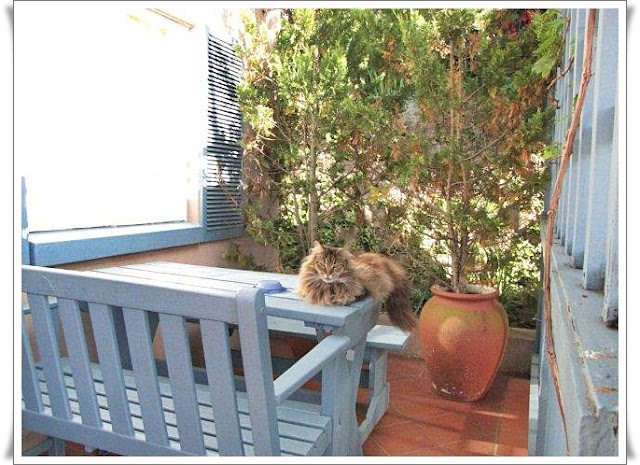 Amber adds to the French chic of the lodge's decor
By 9.30 we greeted our friends and were on our way.
We took the N12  inland to George. We had one more overnight stop about 550kms up the road. But first we had three sweeping mountain passes to travel. 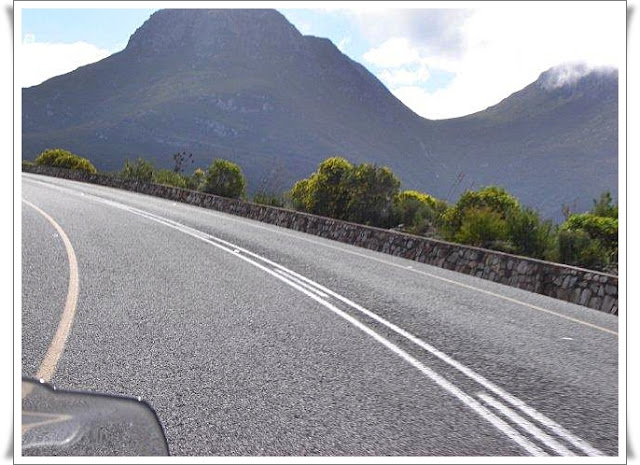 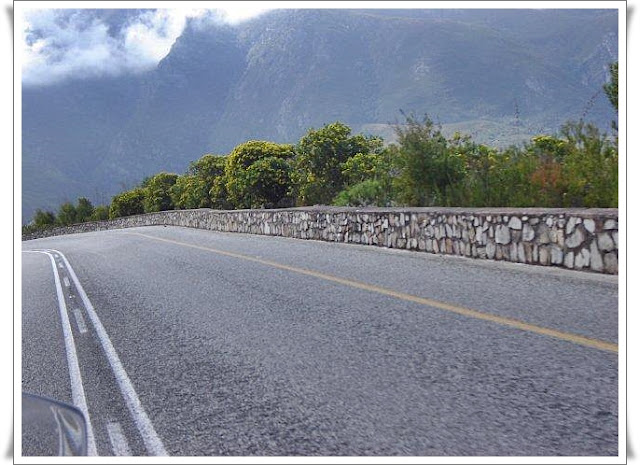 The Outeniqua Pass over the mountains of the same name, links George (in the Garden Route) with Oudtshoorn (in the Little Karoo). A few kilometers from Oudtshoorn are the famous Cango Caves, one of the world's greatest natural wonders. 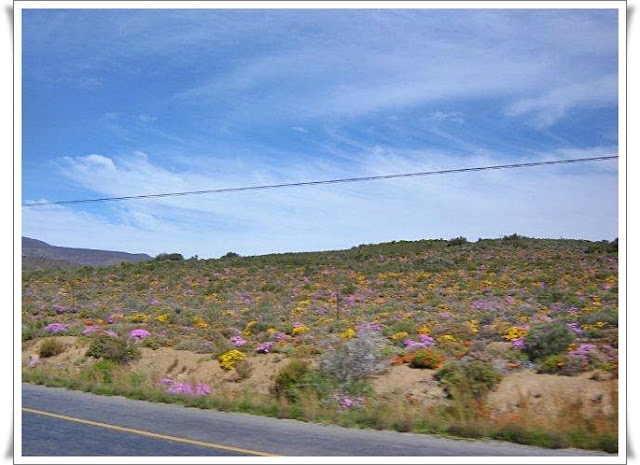 The flowers were still prolific along this route
We bypassed Oudtshoorn, linked up with the N9 and enjoyed half-a-day's ride through the vast Karoo. 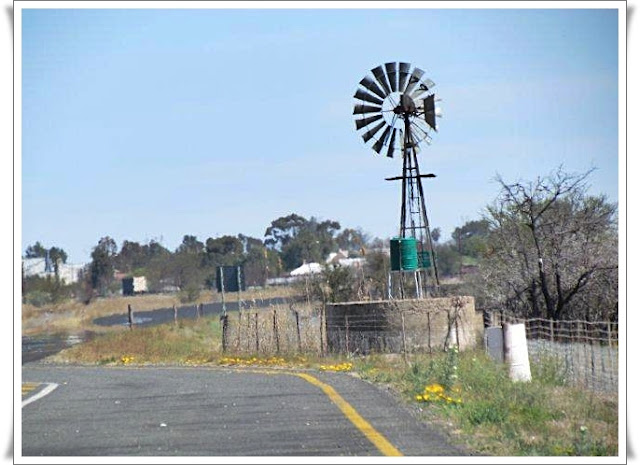 Flowers lined the road as far up as Aberdeen 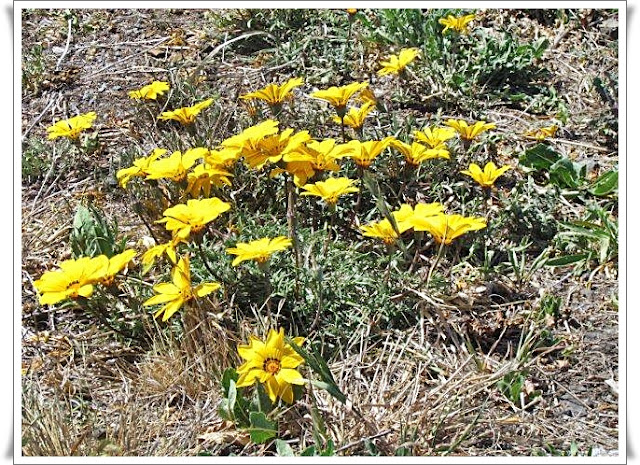 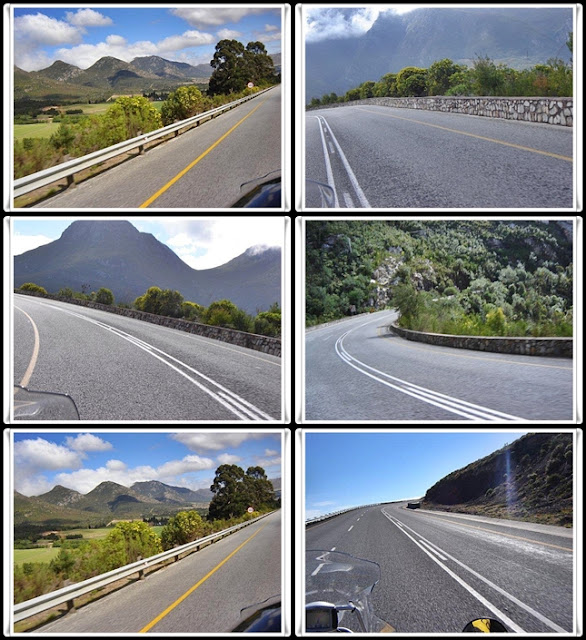 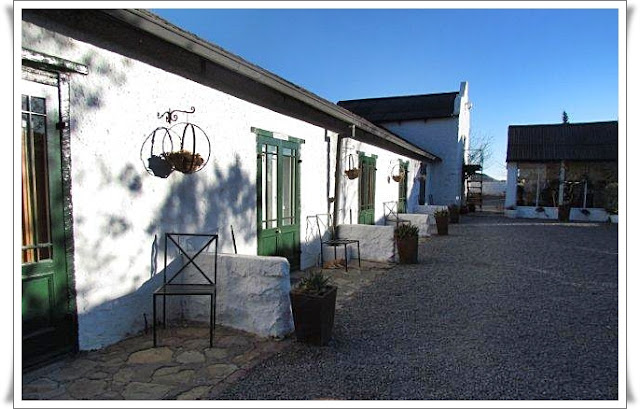 We arrived at our last overnight stop on our trip - Colesberg. and Kuilfontein Stable Cottages.
This farm has been in the Southey family for five generations, since 1875, and has borne witness to a rich history, from wars, to drought, and floods.
The original homestead was built in 1818 and has been an ostrich, sheep, racehorse and stud farm, and today is a mixed farming operation that produces South Africa's world-famous Karoo lamb. There are still herds of the original springbuck roaming the plains.
A Karoo oasis built conveniently close to the N1, Kuilfontein Stable Cottages owned by Leigh and Penny Southey, is a unique experience.(courtesy: Kuilfontein website)
Grant and I stayed over at this farm in May 2005 when we did our first long trip from Marquard to Knysna on our Harley Davidson. Penny Southey recognised us. She said she doesn't know many people who work in Africa (back then we were in West Africa) and tour South Africa on a motorcyle.
After we'd unloaded our luggage into our stable, we changed into comfortable clothes and went for a walk. On our last visit, I'd taken photos of the trees reflected in the dam near the stables. This time I took photos at the same spot. In 2005 Grant took a photo of me standing under the slave bell. This time, he took another of me in the same place! 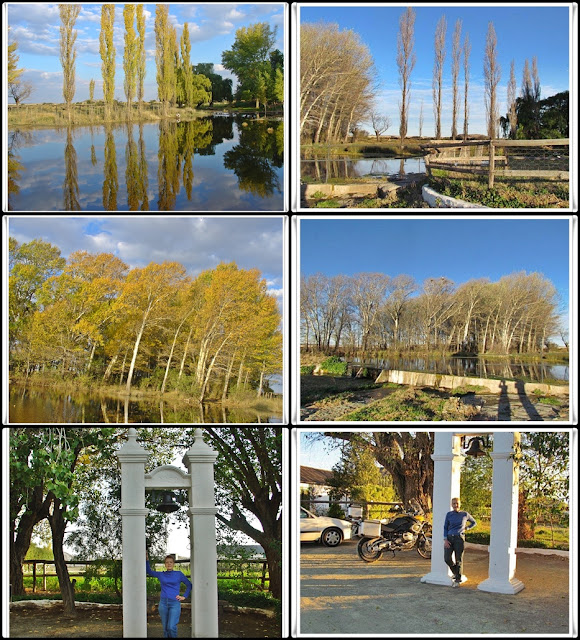 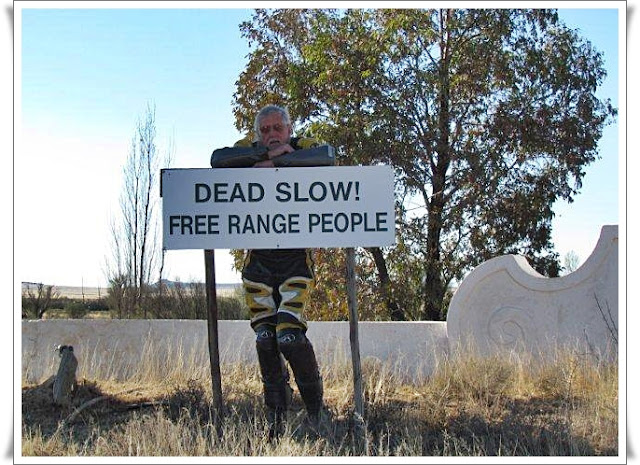 After breakfast the next day, we loaded our bike, greeted our hosts and left. At the farm entrance, near the  National road, we stopped to take photos at the sign.
We turned north onto the N1 and headed for Bloemfontein. Less than two hours later, we stopped at the Engen One Stop for a cup of tea at the Wimpy and then it was the final leg home. 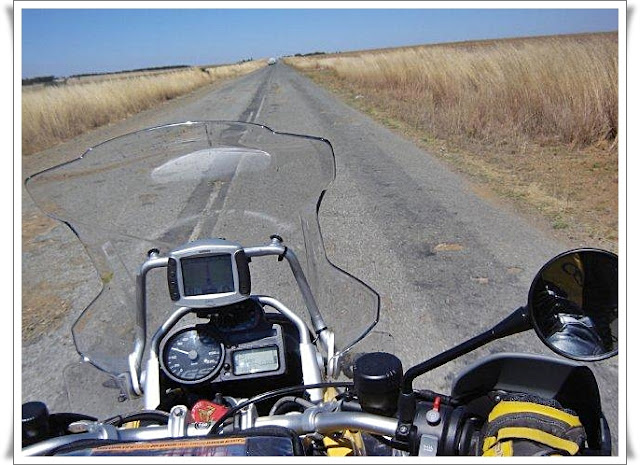 The regional roads in the Free State are in a terrible condition. It's not at all unusual to see vehicles driving on the wrong side of the road (as we're doing here) to avoid the huge potholes and cracked tar 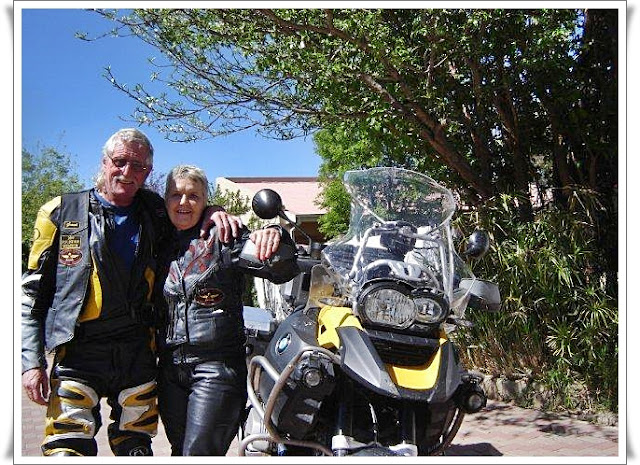 At 2pm Thursday we arrived home. We'd been on the road for nine days, had clocked up 3200 kms, seen hundreds of flowers and other beautiful South African scenery and met up with many friends along the way.
I hope you all enjoyed the bike trip to the Namaqualand flowers with us!
Blessings
Jo