Princess and the Hedges Cats

Hi to all mum's blogger friends. It Ambrose here again! I have another chance to post on mum's blog to tell you our news. There is a new addition to the Hedges pet family:  Princess the  puppy! 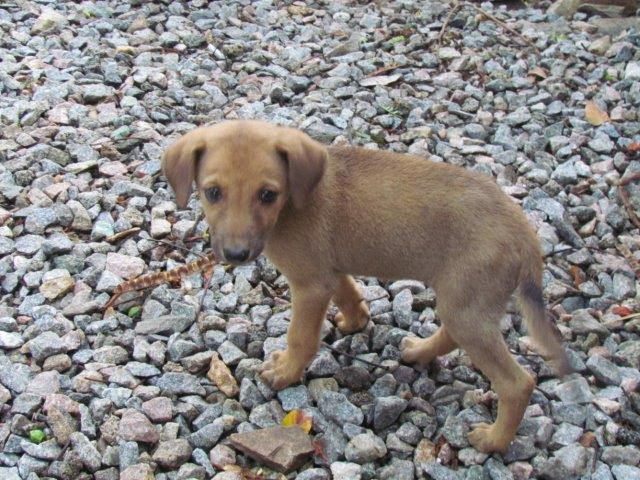 As far we Hedges cats can make out from the yoomens talking, some children walked past in the street last week. There was a tiny puppy following them. It was very tired so it sat down opposite our large garden gate; but the children walked on. When Askari Armani told the children to wait for their dog, they said they didn't want it; he could keep it!

Armani picked up the little dog, opened our gate and passed it to our Askari Michael.

The next morning our mum saw it and immediately brought it into our enclosed shamba at the back of our house. Of course, we kitties were not impressed.

But mum de-wormed the pup and bathed it to get rid of the fleas. Mum  told us the is here to stay. Apparently this is the season of goodwill, etc etc!

Every morning while Michael works in the garden and mum hangs out the laundry, Princess romps around in the flower beds playing with a red ball which belonged to Topsy and Tipsy. 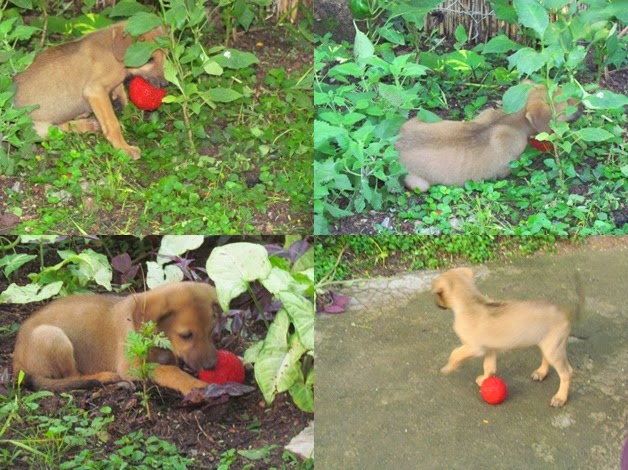 Princess the pup plays in our shamba every morning 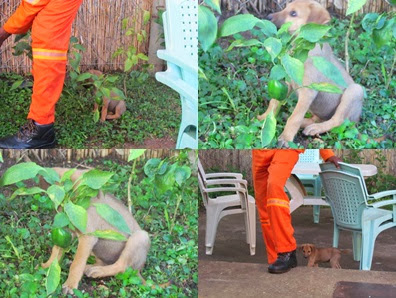 Princess the pup loves Michael who is actually our friend, but mum has asked us to be kind to the pup so she also hangs around Michael

I have already been close to Princess and sniffed at her. Although I did puff up, mum told me I was a very kind cat and that I would soon be playing with her! 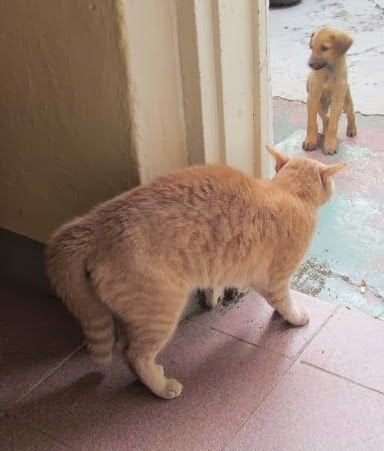 A new creature in our garden makes us kitties puff up 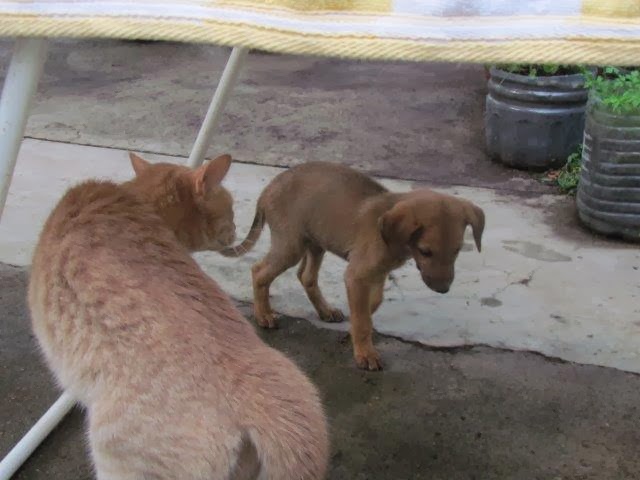 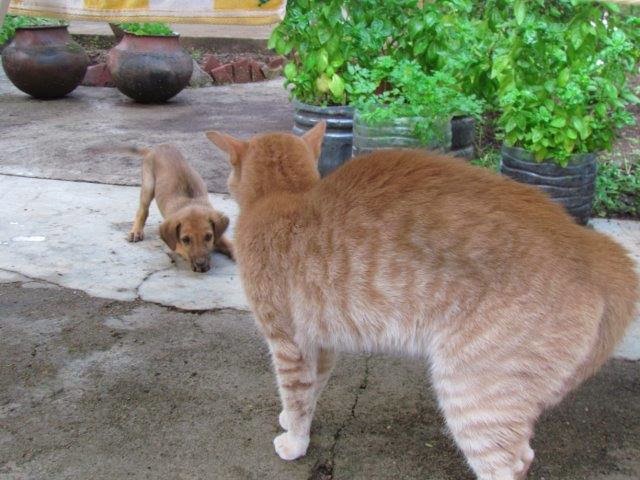 The pup makes a yappy meouw which hurts my ears. Mum says this stance shows Princess wants to play! 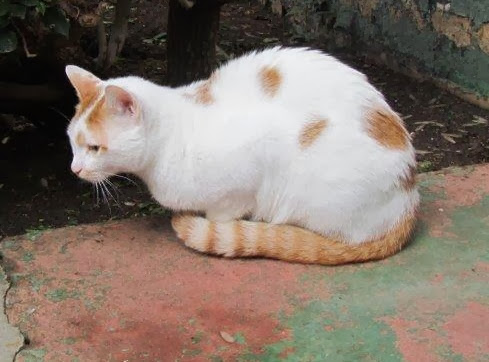 Unca Shadow keeps his distance from the new pup 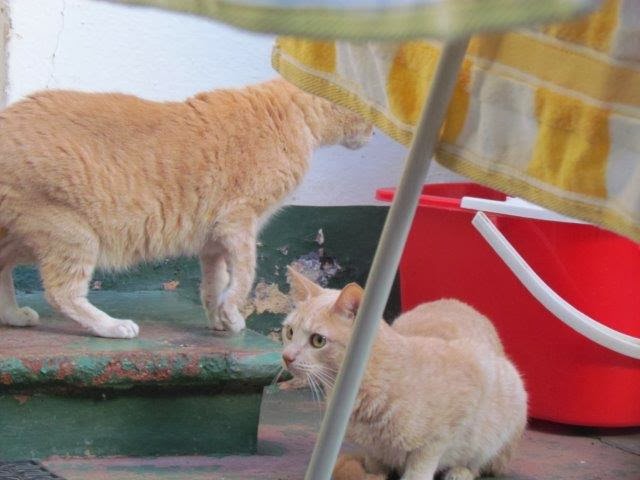 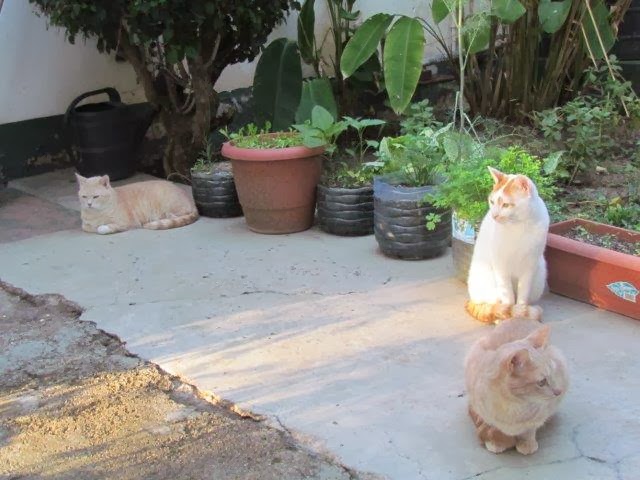 Although mum has done everything to make this puppy comfortable, she insists that it sleeps in the Askari hut. And mum says that Princess is so obedient that after each of her three meals a day of bread soaked in warm milk and mixed with our cat food (yikes, I didn't know THAT!), she sleeps in her box bed next to Michael. 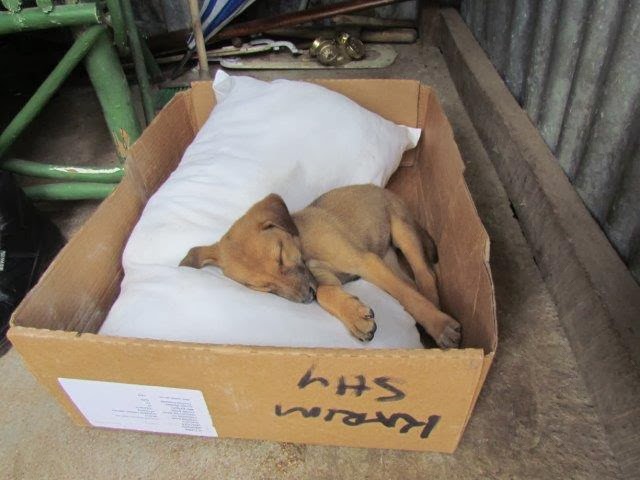 When her tummy is full, Princess spends most of the day asleep next to Michael in his Askari hut

Mum says that by having Princess as a pet dog now, will prepare me, Unca Shadow and my dad Ginger for the day when we go to a faraway place with them. She says they have other dogs in their other house (do yoomens have more than one house?) and when we eventually arrive there, we will be used to dogs.

Although Dad Ginger and Unca Shadow aren't yet keen on the pup, I want to play with her. I'm sure mum will take photos of the day when this happens.

So that is my new news!