Soup and treats for the Blind and Albino School

Last Friday the Mwadui expat ladies visited the School for Blind and Albino children (there are 240 at present) in Shinyanga. Amanda had cooked huge saucepans of meat soup on her stove at home. Once she'd simmered it with lots of vegetables, chunks of sausage and salami, she and her house-man Yasini decanted the thick liquid into two large plastic containers.

Meanwhile, I'd been in Mwanza and bought several loaves of sliced white bread, bread rolls, punnets of cookies, bags of cupcakes and two large packets of toffees. I also bought 10kg each of potatoes, carrots, onions, tomatoes and a 3 liter can of cooking oil.

After Marieta and Amanda collected me at my home, our next stop was the local bakery. There we all bought more sliced bread, buns and rolls. In fact, we cleaned out the front shop of the little bakery !

In Shinyanga we stopped off at the supermarket for personal purchases. Once I'd bought Grant's mouthwash and a deodorant, I picked up six packets of cream filled biscuits off the shelf. When Marieta saw me doing this, she immediately picked up six packets of another variety and Amanda followed suit! We were now fully prepared to serve soup and rolls to the children followed by a treat of cookies, cream-filled biscuits and toffees.

As we pulled into the hostel yard the children started to run from all over to meet our vehicle. They know when the Mzungu Gari (white man's car) arrives, good things happen.

Once Edward, our driver had turned the vehicle around so that we could get to the food, he arranged for the children to sit in groups under a lean to.

The children sat in groups under the lean-to 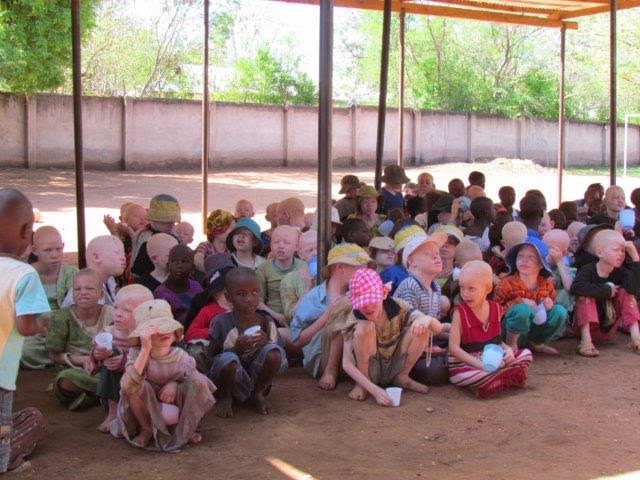 Any one of the children in the above group are the same age as one or more of my grandchildren (It's enough to break your heart!)

A couple of the older boys fetched a table and placed in front of the children. Amanda and Edward called the carers who were standing around watching us load the buckets of soup on top of the table. I asked these ladies to bring the children forward, one queue from the left where Amanda would ladle soup into their mugs and one from the right where Marieta and I were ready to serve them the same. At the same time the ladies were asked to give each child two slices of bread or a bread roll/bun. Although we ladies were already into the task, it looked as though the carers were not too keen to have their beautiful outfits mussed by the not-so-clean children as they filed past. Eventually I saw that they were helping! 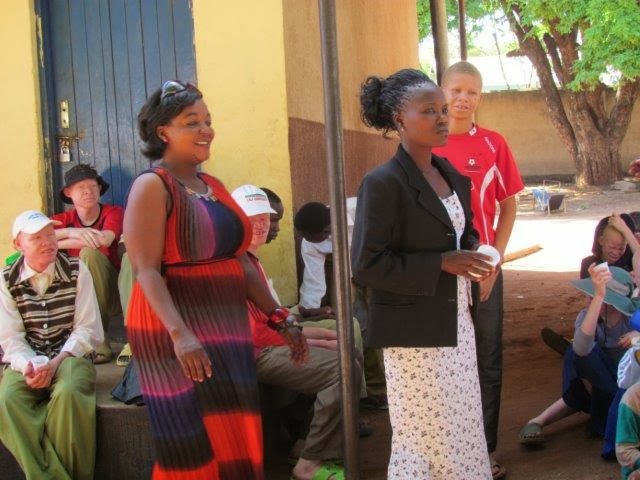 Two of the six carers who look as if they should be on a modelling runway and not caring for orphaned children! 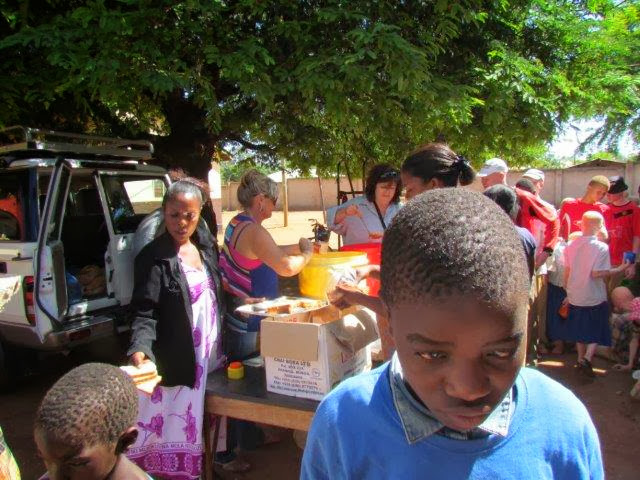 The boy in the front of this photo is blind. Behind him Marieta and Amanda continue to ladle soup into the children's mugs (I stopped momentarily to take these photos) Another carer on the left hands three slices of bread to a little one (not visible) Edward hovered behind Marieta and helped wherever he could 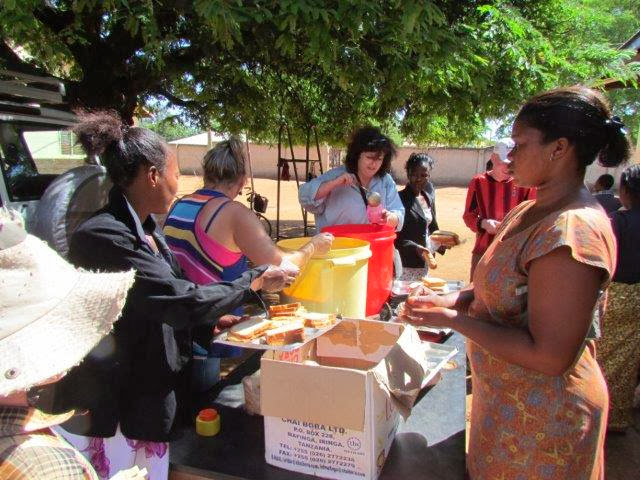 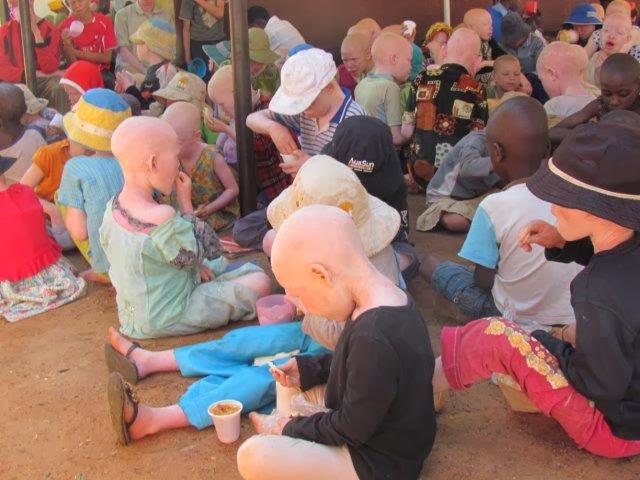 I panned in on the children enjoying their soup and bread. It fascinated me to watch how they broke off a tiny piece of bread, dipped it into the cup of soup and then placed it in their mouths. The ecstatic expressions on their faces, as they savored this, was most gratifying. 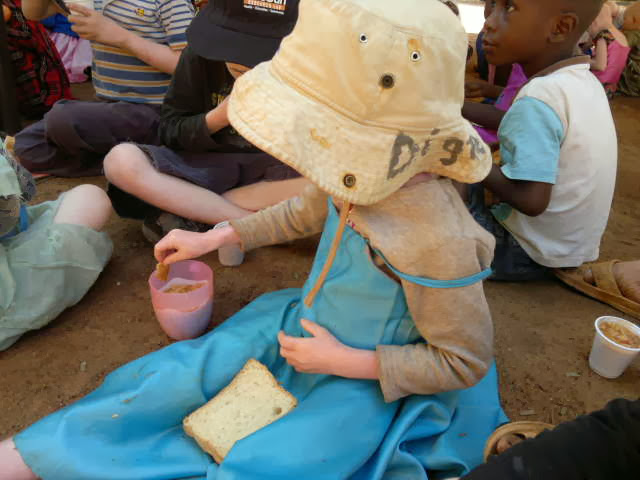 This little girl could be our four-year-old granddaughter, Bethany 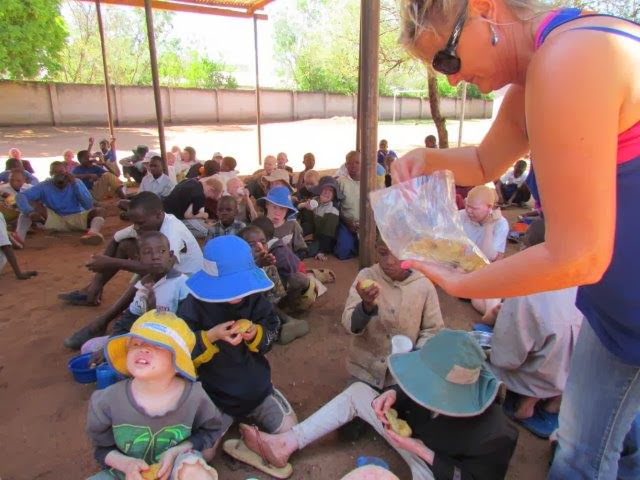 Soon it was time to hand out the sweet treats. Marieta and ... 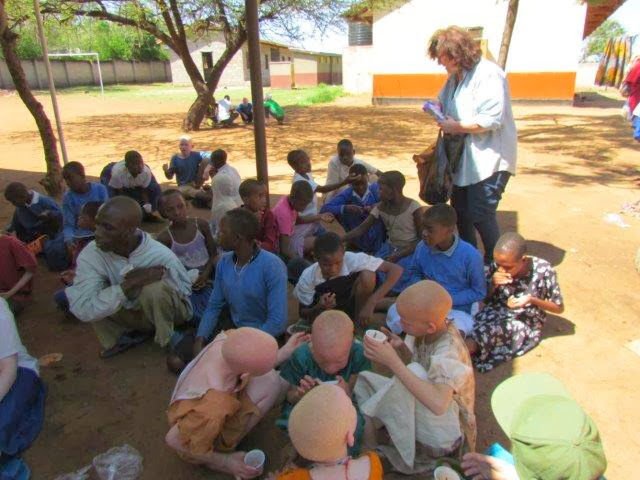 ...Amanda handed out the biscuits, cookies and cupcakes... (one wonders what conversation is going on in the little group in the foreground of this photo) 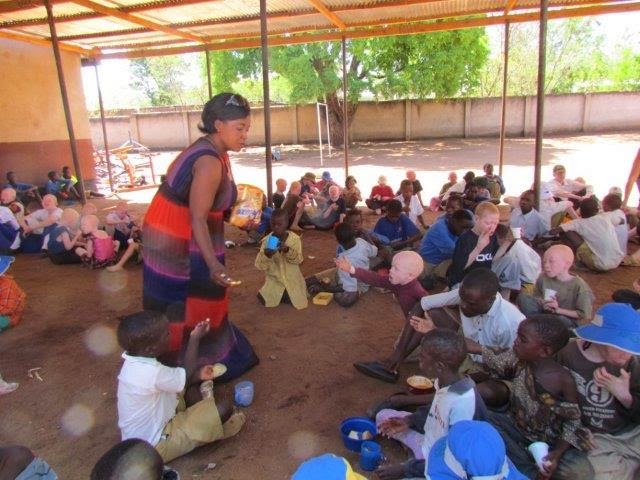 ... while carers gave each child a toffee


A few weeks ago Louise (who's home schooling her 11 year-old son here on site and didn't make it to the soup kitchen on Friday), received several bales of clothing from a charitable organization. At the time, Amanda and I went to the school and handed out the clothes. Many items were a trifle large, but on Friday we noticed most of the children were wearing the clothes.

Many years ago a little boy was found crawling around on this hands and knees between a herd of goats. He was brought to this school, where they ascertained his age to be approximately five years old. Today he's grown into a young lad of about 14 but displays a toddler's mentality. He's known as the Goat Child and makes a bee-line for us as we arrive at the school.   On Friday he was wearing clothes that we'd handed out previously, but as the trousers (as is the shirt) were too large, he pinned both elbows to his thin hips and held them up manually. Amanda took off her own stretch belt and placed it around the Goat Boy. He was now able to hold his cup with both hands. He was one of the children who came for seconds! 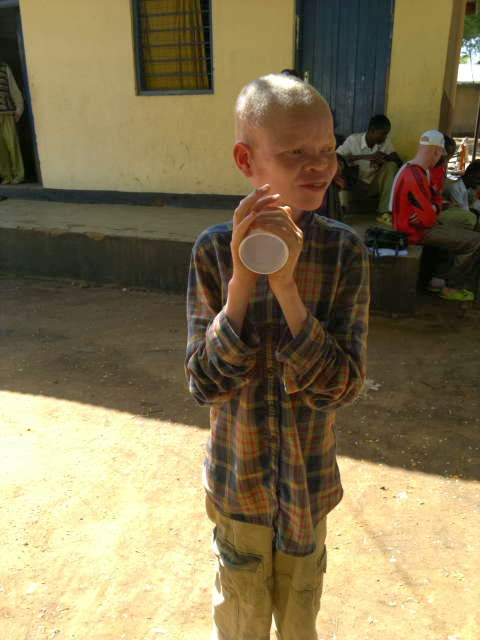 
Once we'd served each child (some came back for seconds), I took Marieta through the hostel to show her the class rooms, library, the ablutions, the dormitories and the kitchen. 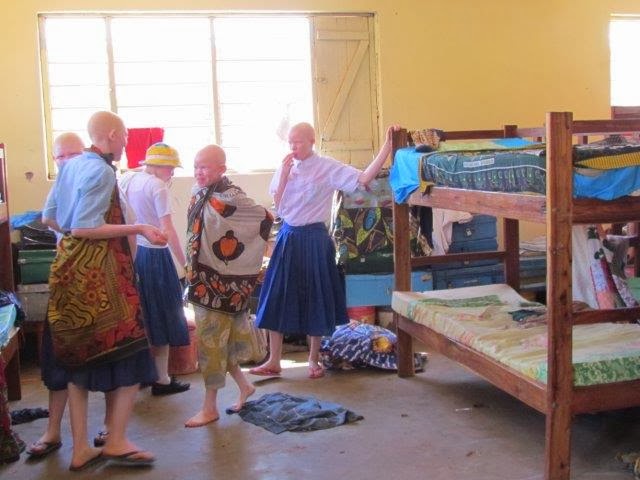 These little girls had had their treat and were changing from their school uniforms into their day clothes. Just like young girls all over the world, they were chatting and giggling together 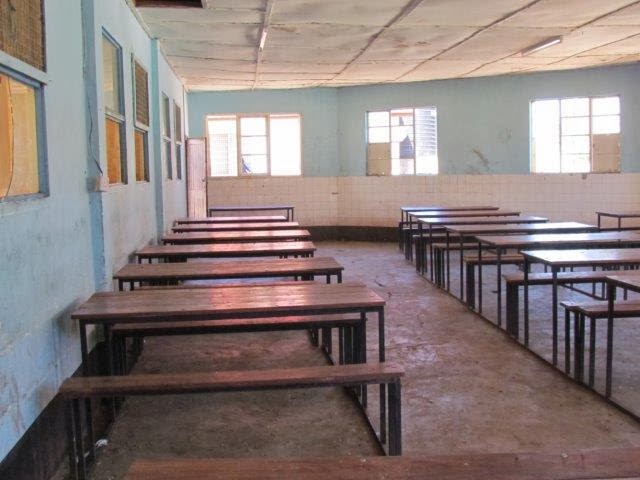 In a classroom, we found a little lad... 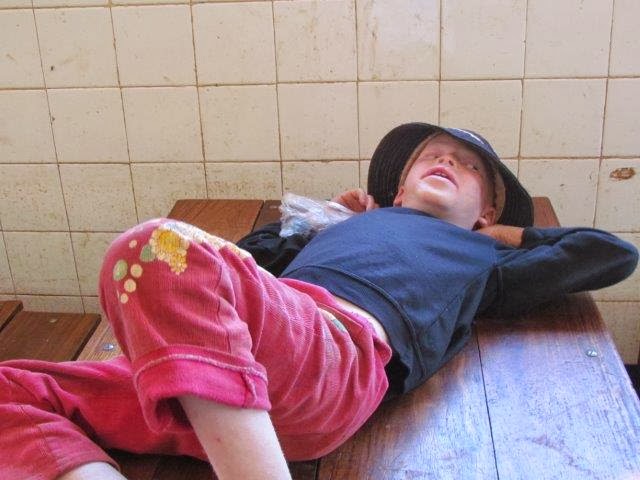 ...who, after a tummy-full of soup and sweets, and still clutching his bread, thought this desktop was as good a place as any to rest 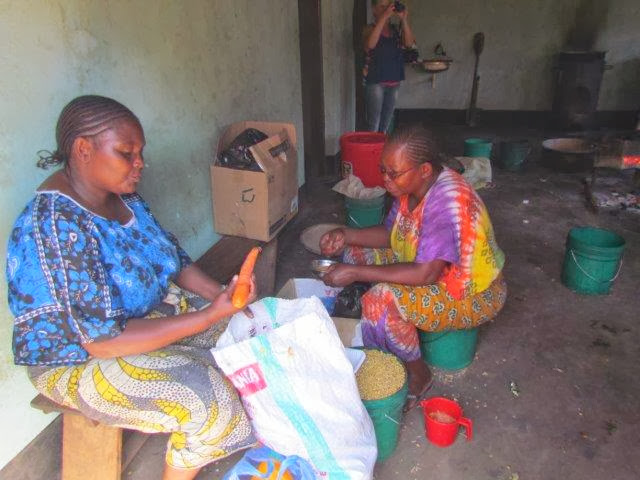 In the kitchen one of the helpers inspects a carrot from the bag of vegetables which I brought, while the other has a quick snack of soup! 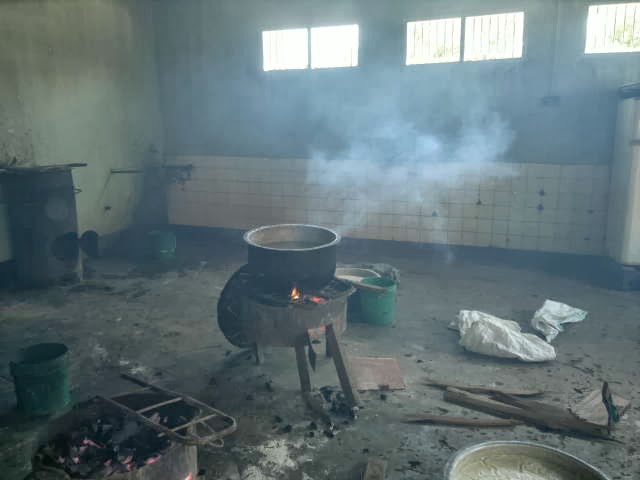 The kitchen is very, very, very basic! (and hot and smoky!) 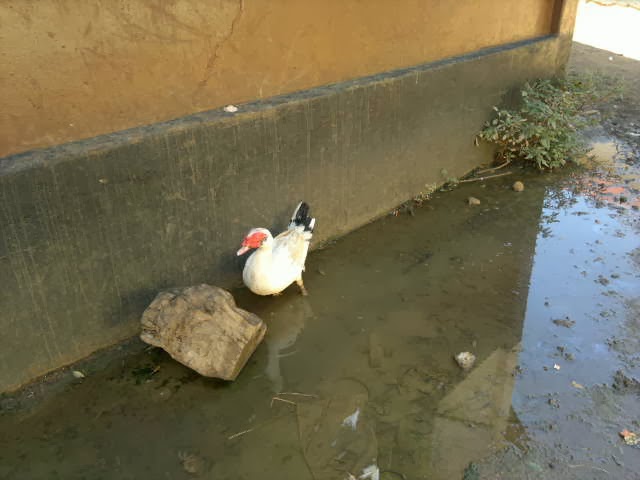 As the staple diet for the children is rice and beans boiled with salt, and maize porridge for breakfast) this duck is in no danger of being cooked !

I hope you enjoyed a look into another part of the world I live in.

Have a great day!