On Christmas Eve, Grant held a social for our company expats at the Guest House. Fortunately I didn't have to do any catering as we'd ordered Indian bitings and biryani from our friend,  Minas in Shinyanga. Grant also invited the six expats left over at the Client camp. Our own group reads like a United Nations gathering but everyone lives and works happily together. 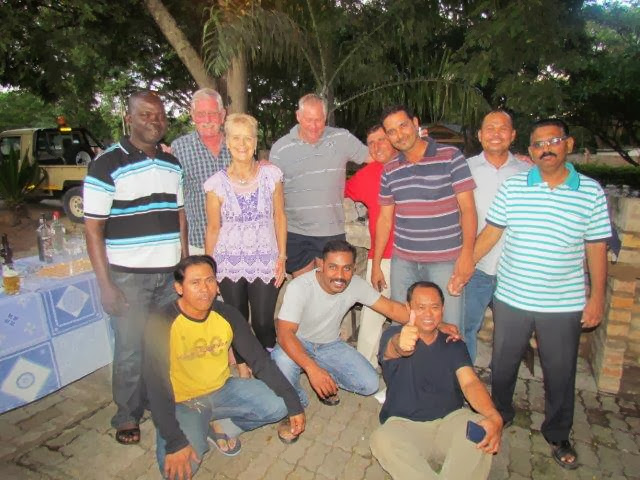 Standing from left: Solomon, (Ghana); Grant, Jo and Johan (South Africa); Miki (Serbia); Sadique and Mani (India) with Barden (Fillipines) peeping between them. Front: Anesta and Ben-joi (Fillipines) with Dipen (India) between them. Barden and Ben-joi are brothers (Absent is Thys SA, Mishka - Serbia who were on leave and Steve - UK, who was trying to rest in his room just beyond this photo 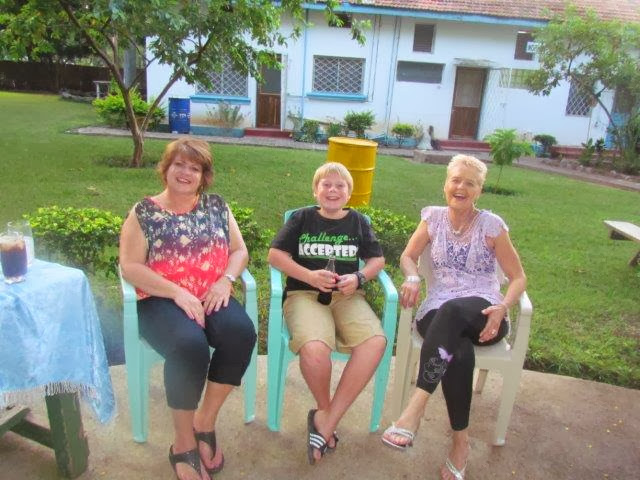 Louise and son, Wessie from the Client and moi

ON Christmas Day, the Indians, Filipinos, Serbs and Solomon the Ghanaian, wanted to BBQ at Songwa Dam about 5kms from town. Grant supplied them with plenty of meat, refreshments and a vehicle. Apparently they had a wonderful day.

The rest of us, being traditionalists wanted the Full Monty; we joined the people at the client club for an alfresco Christmas Lunch around the pool. 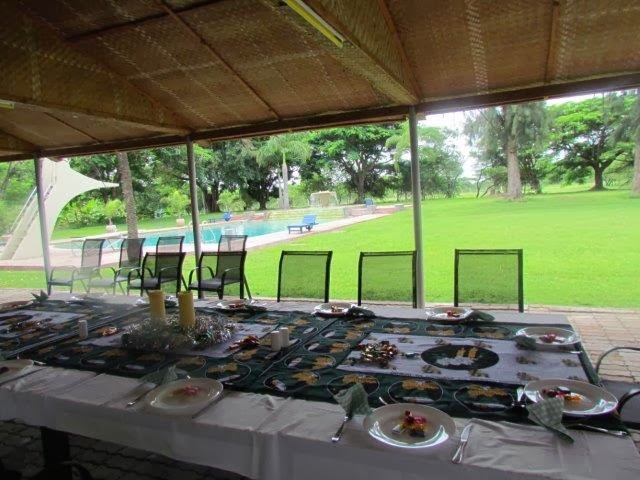 Louise, Tilla and I set the tables with Christmas linen, baubles and candles 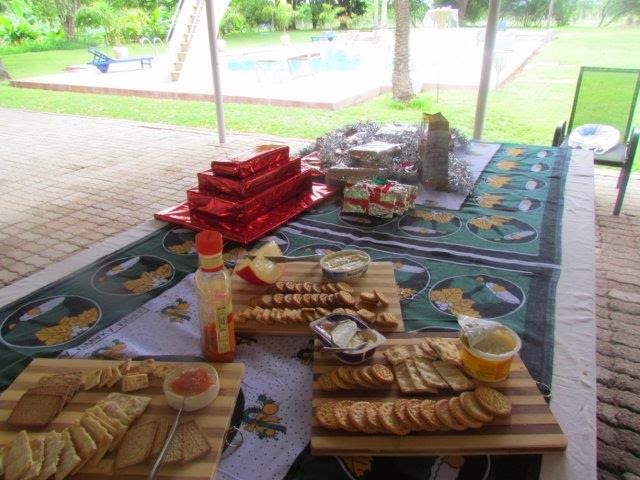 We set out a separate table with all types of cheeses and biscuits which I'd brought in from Dar Es Salaam when I took the foster cats to be flown to SA earlier this month. We also arranged the gifts on this table: note the many red ones were all for the only child on camp 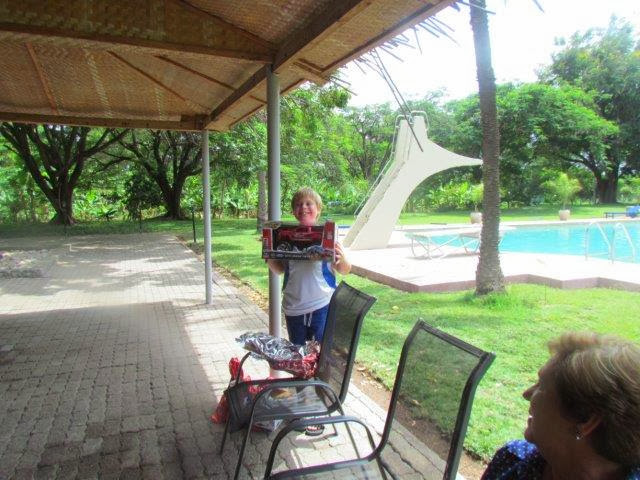 Young Wessie received all his gifts from his parents at the lunch. All the expat adults had also clubbed in and one guy bought an off-road remote controlled car for him. As you can see it was well received! 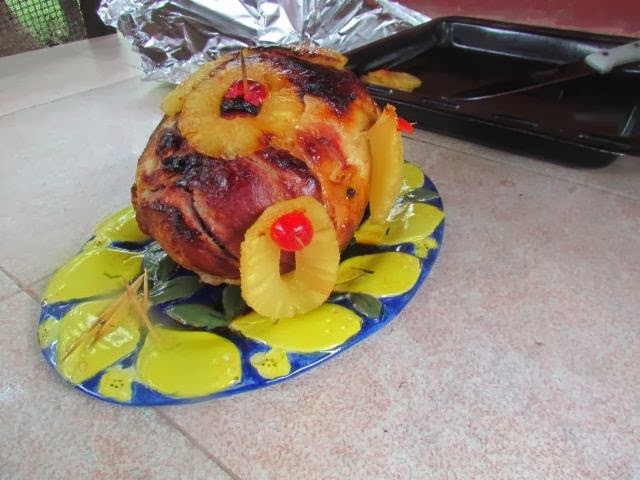 Grant and I supplied the glazed ham and roast turkey. We also made a traditional English trifle and took along two bought Christmas puddings. Tilla had made a flan, roast lamb while Louise made the salads and delicious bread rolls to round off the main course 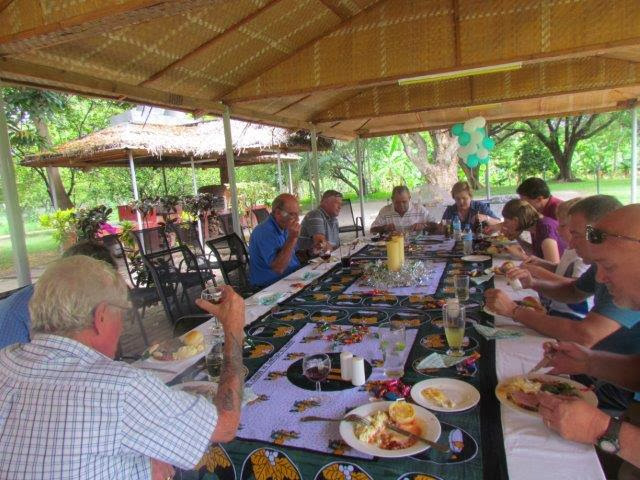 A delicious Christmas dinner was enjoyed by all! 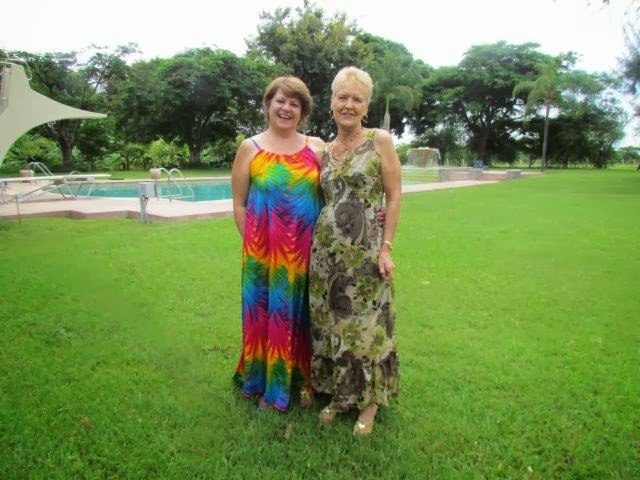 Louise and I pose in our locally bought outfits  in front of the pool. As I always say: another tough day in Africa!

When we'd all had our fill and packed up the crockery and remaining food (which we shared), we all returned to our respective homes. Grant and I intended to go out birding (hence the beautiful sunset which I posted on Friday) but before we left, Johan called me to my back door. He had a serious middle-ear infection which was causing him a great deal of pain. Once I had him seated in an armchair in our lounge, I dug through my medicine chest for painkillers. At the same time, Grant heated a spoonful of tissue oil in a spoon. Johan took the meds with plenty of water. Then using a syringe I inserted the warm oil into his ear. With a cotton wool earplug in place, we sent him to his cottage with instructions to lie down and sleep.

The next morning he told Grant he'd had the first decent painless night this week. He popped into the hospital where the doctor on call gave him strong anti-biotic capsules and an anti-biotic ear oil. The doctor also instructed him to go straight back to bed again!

Meanwhile Steve, who'd been feeling poorly since Monday went to the hospital for a malaria test. It was positive. The doctor gave him meds and instructed him to go home to bed.

Grant and I went out birding on Boxing Day morning. I told him that I'd had a headache since Monday. He said as soon as we returned to town, he'd take me to the hospital for a malaria test.

And which I had.

And which was positive!

I didn't need the doctor to tell me to come home to bed; I just did.  I felt that ill. Fortunately here in Africa, if you get to the hospital quickly, take the prescribed medication and rest until you feel well again, you can survive malaria.

So there was Grant, the only Mzungu who wasn't man (and woman) -down with a malaise ! He hasn't had malaria once in the two years we've been in Tanzania. He puts it down to the fact that he uses a soap in the shower which he bought in South Africa. It's called No-Squite and contains citronella oils and other deterrents which prevent him from being bitten. I've been a little blase and pooh-poohed the idea that the soap helps. But I've since changed my tune: now we're going to bring back a dozen cakes of this magic potion when we return from leave in February.

At the same time, Grant has asked the Client safety officer to come and spray around our house, the Guest House and all the other private houses which accommodate our people this morning. Only thing is, I'll have to keep the little pup indoors (I can't imagine the cats approving) and the chickens who normally roam around the garden in the day, will have to be contained in their night house.

I hope you're all having a wonderful Christmas Season with your friends and family.