This weekend Grant and I opened a shop in the shopping centre in the Valley. The Art Box is my business and I am selling art and souvenirs by local artist, Steve Bull. 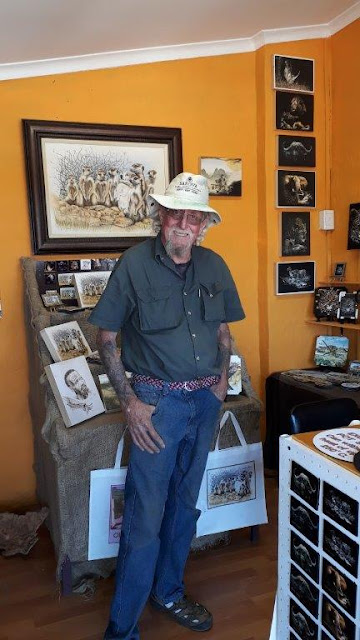 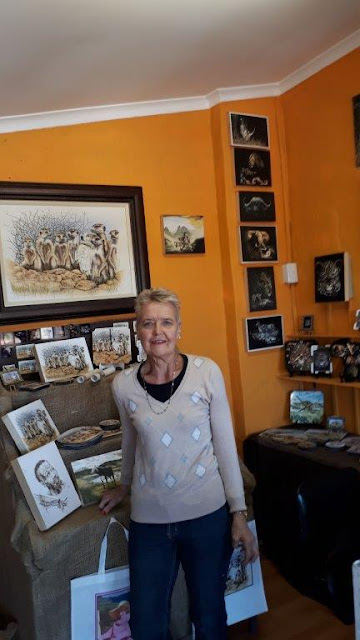 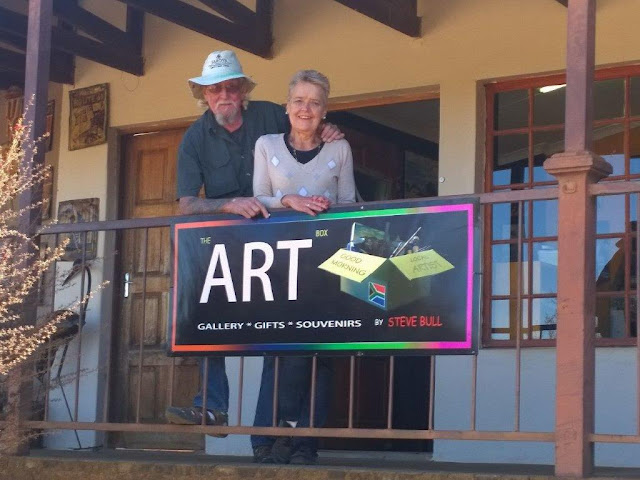 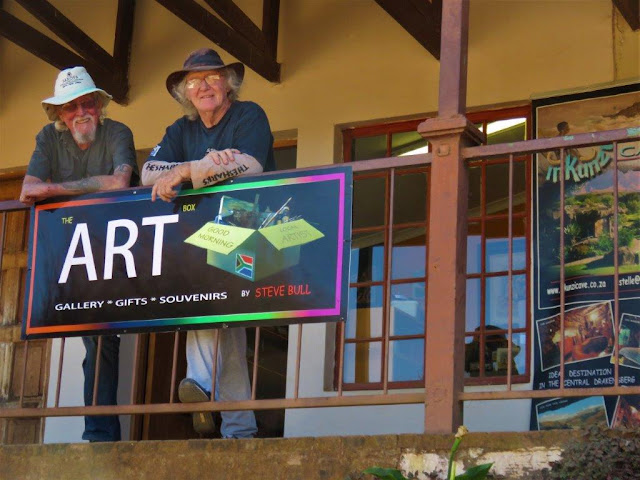 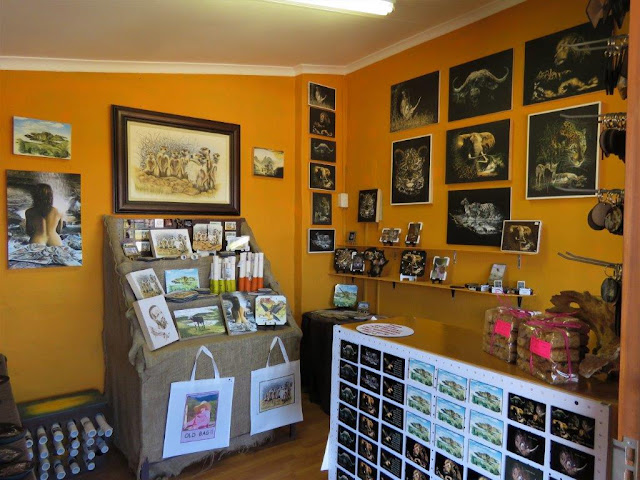 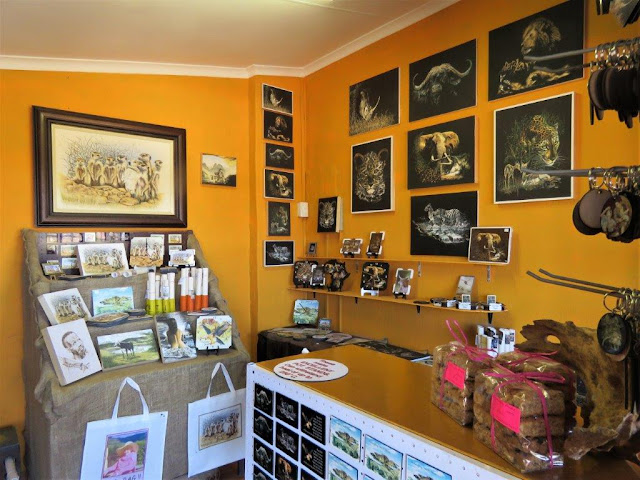 The hessian-covered tables above is called the Muthi table; for those who have read my blog, Muthi is an old Jack Russell belonging to Steve and Estelle Bull. Muthi is 21 years old (which translates to 147 doggie years!) In his younger days, Muthi used to sit up on his hindlegs with his forepaws hanging down - just like a meerkat. Estelle suggested Steve paint him in a mob** of meerkats and that's what he did. This particular picture has been a great seller in the shop. Apart from many varied sizes of Muthi prints, we have a selection of other Muthi souvenirs. 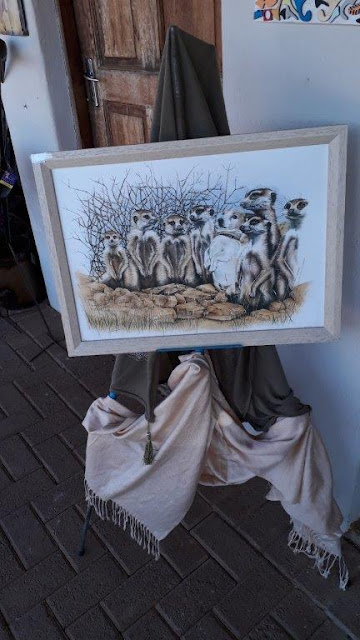 Framed Muthi print on easel at the shop entrance

As people approach this painting, I hear Awww, just look at that dog! Oh sweet; see how that doggie is standing up in between the meerkats! On and on.

I go out and tell anyone standing there that the old boy is still alive. I have a video clip on my Smartphone of Muthi having a "silly five minutes" taken only last week.

Muthi is a unique selling point and showstopper for Steve's art and ultimately for my shop. Praise God! 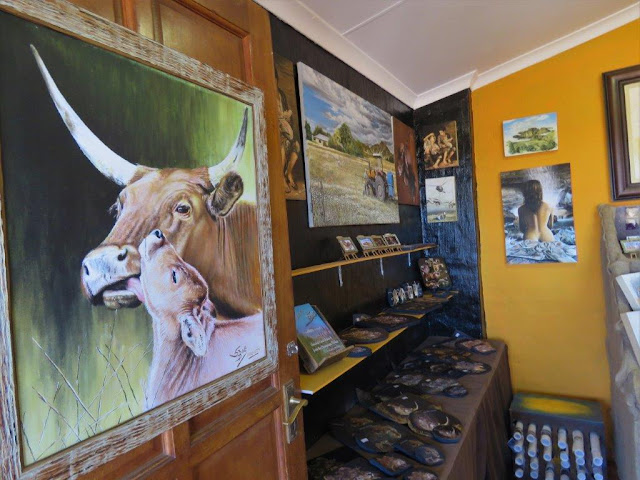 This picture above is my favorite. To capture this image, Steve proving the crazy tactics he uses, stopped and stood at the fence surrounding a paddock with a herd of cows and their calves.

The cows were grazing; the calves were just standing around; their mothers ignoring them totally.  To catch their attention, Steve started to moo. Within a minute, the first calf and then the next and the next approached Steve at the fence.

The mothers looked up startled and soon had joined their calves. As this particular cow licked her calf, Steve captured the moment. 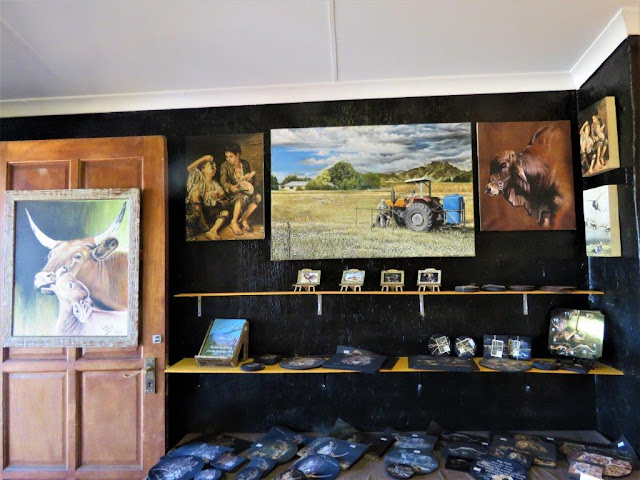 Steve's art includes wildlife pictures, domestic animals, a farmer and his son (in the middle of the photo above) and Bushman Art. Inkunzi is Zulu for a bull and Steve's surname is Bull; hence Inkunzi Cave as one of his unique accommodations on his property. I have the banner for this: The Cave outside my shop - another showstopper. People stop to look at the pictures on the banner and I go out and explain what it is.

I have Inkunzi Cave pamphlets which I give them and tell them to Google it and do the virtual tour. Every booking that comes via The Art Box, is a percentage for me.

Steve and Estelle have been stalwarts in getting me up and going and helping to generate revenue from the shop and The Cave bookings. Bless these dear friends of ours. 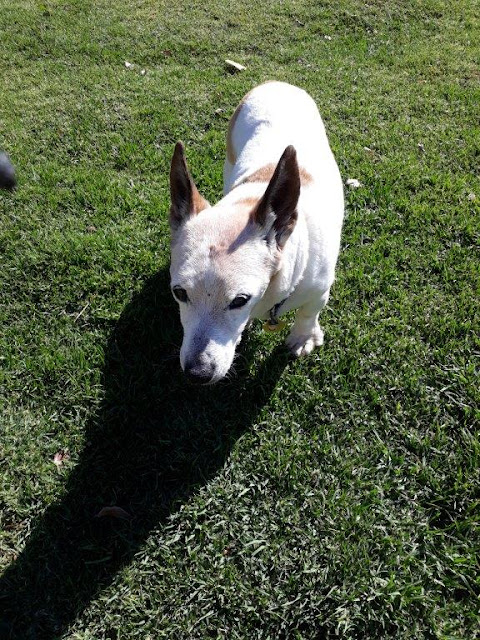 I'm linking to Our World Tuesday, here
Posted by Jo at 4:30 AM