I've mentioned The Purple Giraffe a few times in posts about life along the veranda here in the Cedarwood Village Mall. Craig and Linda run this homely restaurant and a few times a week, Steve orders him and Grant a cuppachino each and me a pot of rooibos/redbush tea.

As mentioned in my post earlier this week, Grant helped Craig when his car had a problem. On Monday night Craig and Linda moved from their rented house on a farm to another rented bungalow further up the Valley. Craig and Linda are cat lovers and have four cats. Over the weekend, when I asked Craig how he would be transporting the cats, he said in an open chicken coop and in a cardboard box. Grant and I warned him that this was not practical or safe as the cats would probably escape and run away into the veld en route. We offered him our four travel containers which Grant fetched from home.

On Monday afternoon Craig invited me and Grant for breakfast on the house before we opened shop on Tuesday morning. The first thing we asked Linda when we arrived was how did the transporting of the cats go? She said the cats were meouwing and hissing so badly that she began to stress. She eventually was hyperventilating so badly that Craig took her to the pub for a double whisky.

The cats arrived at their new home quite safely but by the morning were still hiding behind the curtains. I suspect that by evening they'd have forgiven their humans for the upheaval and would be settled in well. 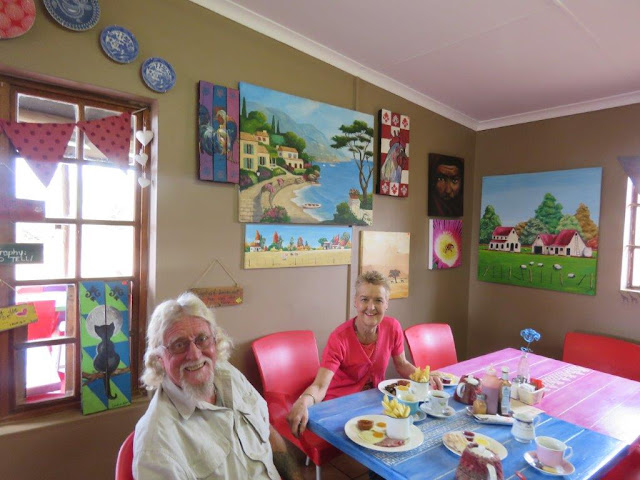 Grant and Jo being treated to a Purple Giraffe breaksfast

While Grant and I enjoyed a delicious breakfast and chatting to our hosts, Val, one of he other tenants, who owns the laundromat. arrived. She sat down and was offered a cup of tea which she readily accepted.

When I opened my shop, I remembered that my till roll had reached the end the day before. This is one thing Grant cannot help me with. I set off down the veranda in search of Val who had set up my cash register at the beginning of the month. I found her at the Chocolate Shop which is at the other end of the veranda ! She was enjoying a cup of coffee with her husband Robin and daughter, Sherona.

Val returned to the shop with me but after struggling to insert the till roll, she said she'd send her helper, Thulie who always sees to her till in the laundry. Thulie then arrived and after quite a battle, managed to insert my till roll.

Voila! I was in business again!