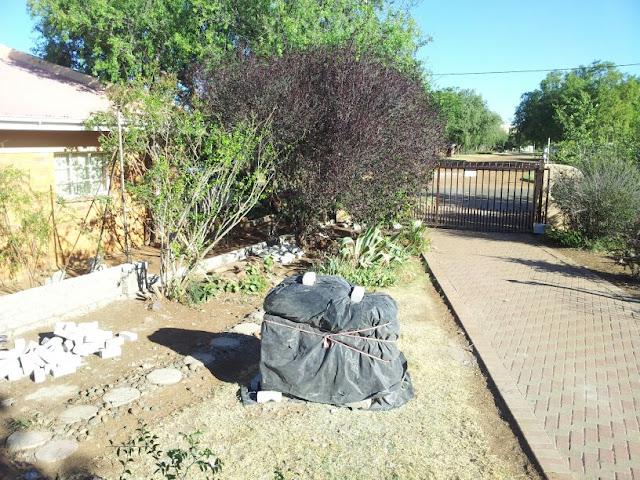 Rebuilding a boundary wall on our SA property

When we had the exterior of our house in SA painted at the end of 2012, we found that a boundary wall (built in the '50's) with our elderly neighbor and dear friend, Pienkie's garden,  was sagging badly. Our three dogs and Pienkie's three, regularly "chat" rather loudly and aggressively through the holes in this wall, often standing against it to get at each other. This and the passage of time has not helped the wall to remain stable.

While we were on leave in December, we called in our friend and professional builder, Pine,  to give us a quote on breaking down the original wall and rebuilding it properly. Pine who's surname is Pienaar (pronounced Pee-naahr),  probably has a first name but I have never known what it is. He is simply known to all as Pine!

Now, I don't know about the rest of the First World, but when you need building and renovations carried out in South Africa, you generally anticipate that your stress levels are going to rise to an all time high and your patience will be tested to the limits! The job normally starts with a bang, then a day later you'll find that the owner stops his pick-up van outside your house, offloads the workers and drives off to another job. You don't see him again for the rest of the day; try to contact him on his cell, you're greeted by his voicemail. Fortunately in a small town like Marquard, you can drive around the streets and would probably find the errant builder on another job! But for absentee home-owners such as Grant and I, this is not possible and a job can take up to three times as long as it should, the workmanship is shoddy (no supervision = no-good job) and often loose ends are left for you to try and tie up during your short break from your work and life in faraway Africa. Oh, and this builder will often always ask for an advance of at least 50% of the quoted price.

As you might have guessed, Pine painted out house and outbuildings with not a spot of paint out of place. He also completed the job in under nine working days. Our daughter-in-law, Amanda says that when she arrived on our premises one morning, Pine had four painters working on four garage doors simultaneously. By midday all four doors had been primed, painted and the edges tidied and the workers moved onto their next task.

Last night we received photos of the WIP of the wall project. One of my - NO - my main concern - was that our dogs would get into Pienkie's garden and vice versa. No such worry. Pine had erected a temporary fence before he broke down the old wall. 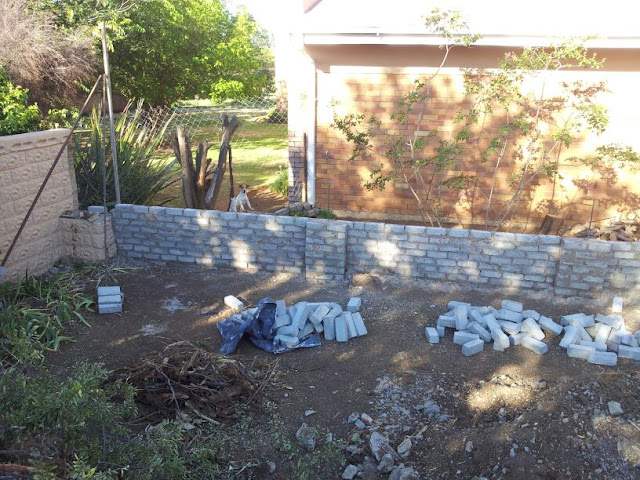 You can see Pienkie's little Jack Russell behind the temporary fence seperating our dogs from hers! (Her two big dogs aren't visible here and ours are obviously asleep in the garage! 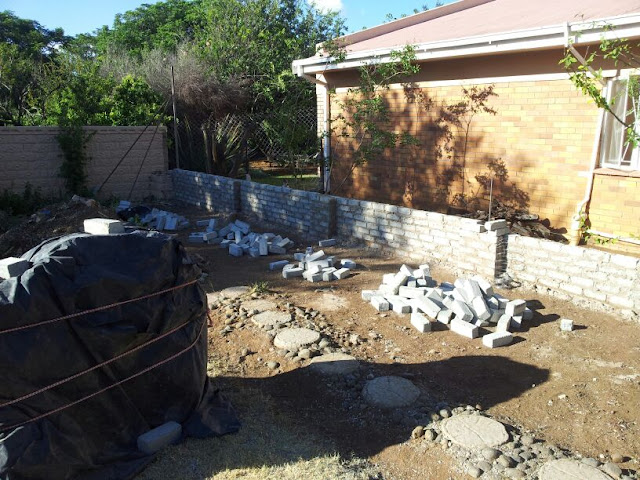 A couple of youngish trees were growing to close to the wall and had to be removed. Pine took a week to dig out the old foundation, remove two trees and get to this height in four days. He will complete the job by adding a pattern similar to the existing wall which is visible at 90 degrees to the new one and paint  it the same colour

As you can imagine, if we need any other renovations to our house (the interior is next), Pine will be our first and only choice! It makes perfect sense: if you want a professional job done use a professional!

I hope you're all having a great week already!