The Vet visits the Hedges Cats

I generally don't do a cat post during the week. I keep our cat-tails tales for Sundays. However, all three our kitties here in Tanzania needed their annual inoculations. The last time they'd been "done", was in Kenya on 21/01/2012. Ironically the vet arrived yesterday : 21/01/2013!

You may remember that during October last year I posted about taking Ginger and Ambrose to have their micro-chips inserted by a certain Dr Mawaluko . The trip to Mwanza was very stressful (for me!) so when the vet mentioned that he does house - calls, I told him I'd be making an appointment early in the new year.

When I phoned him a couple of weeks ago, he said he has the anti-rabies shots, but not the other injection which I mentioned. It is a four-in-one inoculation called Fellocell 4 which guards the animal against - among other things - leukemia! I told Dr Mawaluko that I'd order the injections from South Africa and call him when they arrived. I phoned the vet in Bloemfontein Animal Hospital, and when I opened the conversation with "Good morning Dr Winkworth, it's Jo Hedges from Tanzania; I'm not sure whether you remember me? "  He said: Of course I remember you, Mrs Hedges,. You're the lady who brought a cat in from the Sudan to SA, from SA to Kenya and then onto Tanzania!" (Shadow, our fame precedes us, LOL!) On the other hand, I'm sure the vet  remembers me because the special blood test which Shadow needed  to enter Kenya two years ago, cost us R1000/US$115!

I asked him to book me three injections and that a friend would collect it for me. I then sent Wessel (my IT friend!) a message on his cell phone and asked him to fetch the meds from the vet's clinic. Last week when Wessel arrived on site after his Christmas holidays, he gave me the carefully wrapped parcel on a freezer pack! Yesterday I phoned Dr Mawaluko who said he's jumping onto a piki-piki/motorcycle taxi immediately and would see me "after two hours". (this in Africa-speak means: within two hours - or more - I will be there!) However, a half an hour later my phone rang again and Dr Mawaluko told me he was at the mine gate! (I found out afterwards that he was in Shinyanga when I phoned, which is only 34kms from Mwadui.) Grant's head of security fetched him on his motorcycle and delivered him to my house!

Meanwhile I'd placed each cat into their respective travel cages, an action which made me highly unpopular. Shadow and Ambrose sat down quietly and looked out with huge eyes. Ginger immediately started to complain, meowing loudly and then he tried to rip the water trough from the bottom of his cage!  I decided to do the deed on our enclosed veranda as there was not much place for the cats to get away if they broke from my grip.

Once the vet had prepared the syringes, I took Ginger out of his cage and wrapped him in a towel. It took a firm hand to keep him from squirming out of his restraints, but I managed it. With the doctor leaning over me sitting on the bed, he injected first the Rabisin and then the four-in-one meds into Ginger's rather fat neck. I patted him, (the cat, not the vet)  opened the door leading into the lounge and Ginger dashed off to go and hide under my bed!

Next,  I removed little Ambrose from his cage, got hold of his neck skin and held him down while the vet injected him. Although he (as are all three our cats) is petrified of strangers, especially men, he didn't even flinch when the needle went in under his skin. I patted his head, opened the lounge door and set him down. He walked onto the carpet and lay down!

Then it was time to remove Shadow. Mmm. The vet asked me if he was vicious but I explained that Shadow is very highly strung and would bite if it meant he can get away! I managed to wrap him in the towel, got hold of his neck (I was shown a grip like the one a kittens mother uses to carry them, and while not at all painful, it literally makes the cat go limp). The doctor leaned over me and inserted the needle. Well, it was like a bomb exploding in my grip! Shadow jumped so violently and broke free. He dashed to the window ledge and glared at me! Talking softly to calm him down (while the vet cringed in the far corner!) I slowly advanced on him. He shot off like a bullet and this time, he frantically climbed the screen door leading into the lounge. Fortunately I managed to grip him again, held him down on the bed and the vet  made two quick plunges before Shadow escaped again. This time I opened the door and Shadow ran through to hide under my bed as well!

Thanking the vet, I invited him to sit down in my lounge and enter the details and labels (which you pull from the little vials) into the cats' passports. Once he'd signed the entry, he added his stamp and I was thrilled to see that he is the State Vet for the Shinyanga area. This means that when we do eventually leave Tanzania to go back home for good, I don't have to find the government vet to sign the umpteen official papers required by the strict customs control at the South African airport! He, in turn, kept saying he'd never seen anyone who was so organized and  whose cats were so well-cared for. I'd already told him that the veranda and the bed is for the cats and then showed him their cat-tree and the box of toys. I also took him through to the kitchen where I showed him each cat's bowl with cookies, the three freshly-replenished water bowls: one near the food, two in the diningroom and a fourth one in our bedroom,  as well as a dish of little dried fish, for nibbling in between. He seemed fascinated when I told him that my cats only eat from their bowls and do not share one bowl at all. When I showed him the cat's grocery cupboard filled with tins of cat-meat in jelly (my cats eat only "in-jelly" not "in-gravy" varieties), his eyes grew decidedly bigger. My reason for making all this obvious is that, as a professional man who deals with domestic animals in Africa daily, I'm hoping he will encourage the next pet-owner he meets up with to also care for their cats, dogs, cows, goats or poultry. I do know first -hand how people struggle to feed their children so how can you even care about a dumb animal, but they insist on having pets, so hopefully they will do everything they can to care for them!  (BTW I didn't get a chance to show him the royal life which the chickens on our yard have!)

So thanks to Dr Winkworth in Bloemfontein, our friend, Wessel and Dr Mawaluko from Mwanza,  the cats are up to date with their shots for another year! 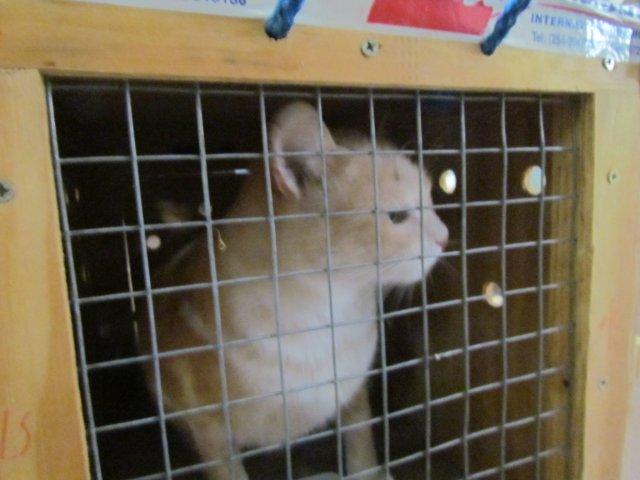 Ginger's gentlemanly manners fly out of the window when you cage him! 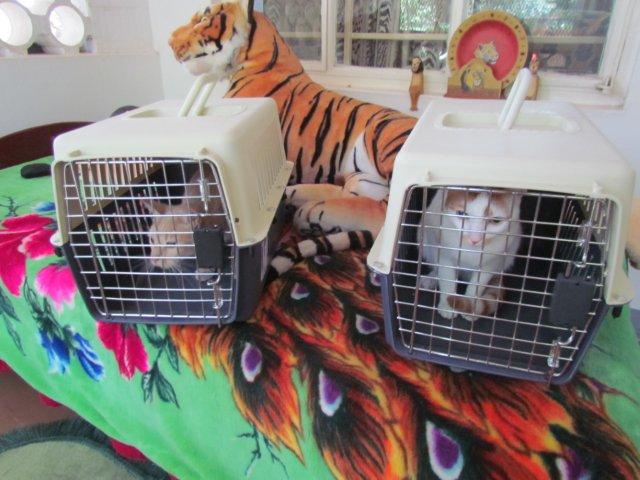 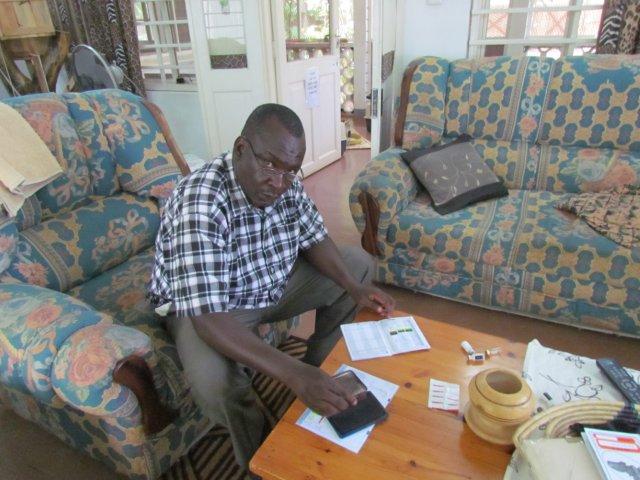 I'm linking today's post to Our World Tuesday.
Posted by Jo at 3:30 AM