While on holiday in South Africa last month, we traveled from our home in the Free State to the Kwa-Zulu Natal Drakensberg to spend a night with John, Debbie and children. Driving back home after a wonderful reunion with the family (which I posted about in December), I managed to snap a few photos from the car. Below is a typical African scene of washing on the wire fence, with the magnificent mountains as a backdrop. 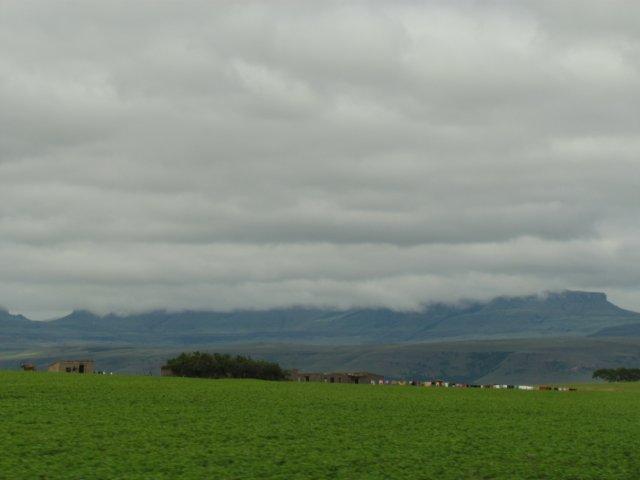 An idyllic and typical African scene ... 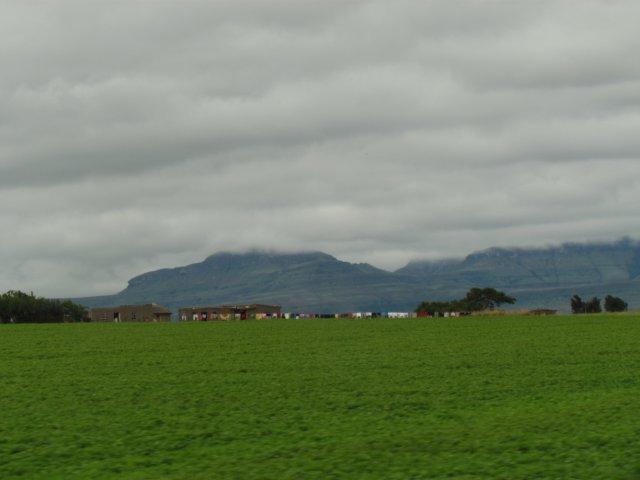 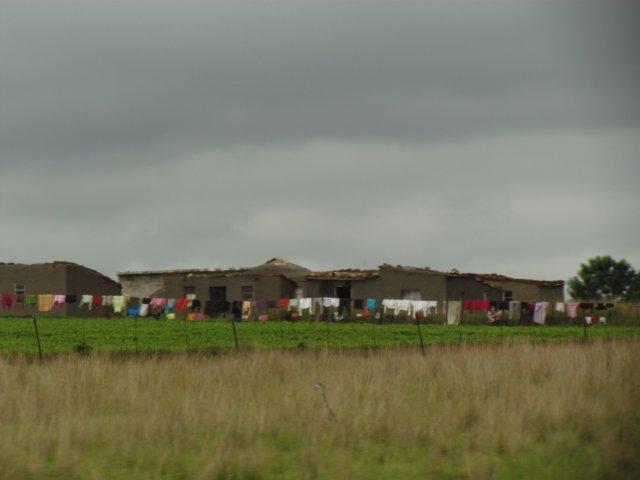 ...draped over the wire fence surrounding a small Africa settlement

A few kilometers ahead I managed to capture the Sentinel Peak one of the highest free-standing peaks of the range (3166m or 10386ft).  It was also the first major peak to be climbed via a rock climbing route. This was in 1910 by W. Wybergh and Lt. N.M. McLeod. 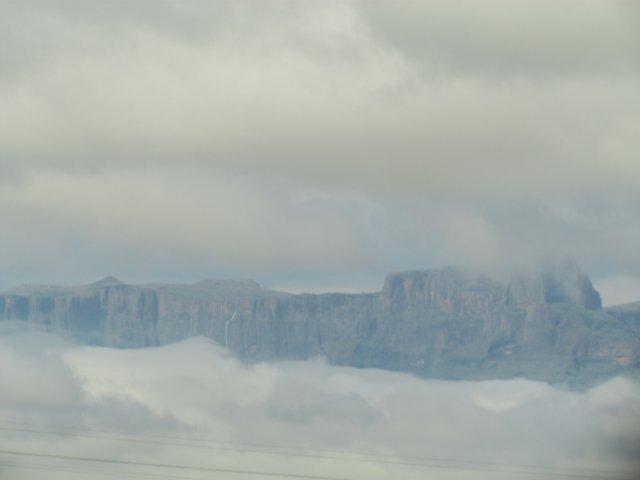 John and Debbie have hiked the Drakensberg mountains since they were very young; John had his first taste of the 'Berg when he was 13 and Debbie can recall hiking from six years old! Their own children have also grown up in the Drakensberg and to date, the youngest "hiker" (carried on his dad or mum's back) is little Israel from the age of three months! His older siblings, Eryn (9 3//4), Joshua (6 1/2), Bethany (3 3/4) and Elijah (2 1/2) are all intrepid little hikers in their own right already! 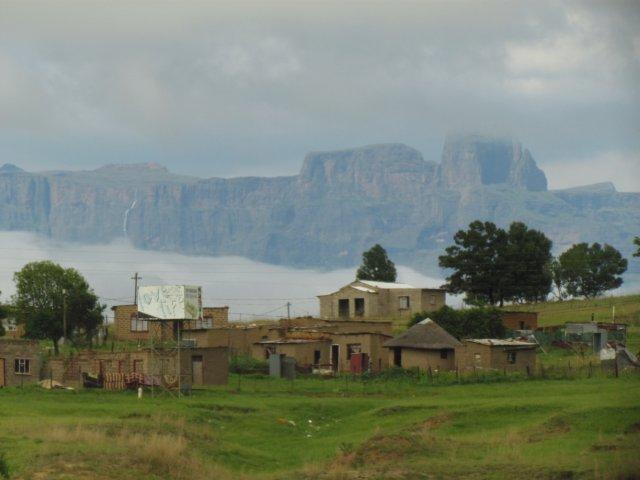 As we left the Drakensberg behind us and traveled up the pass towards the Free State border, we came across a troop of baboons that have inhabited these parts since forever. Normally these primates sit casually on the side of the road eating bits from take-away containers that motorists toss from their vehicles. (yes, this happens in SA; littering is not a punishable offense, more's the pity!) However, the road across these hills has been left to fall into great disrepair and very little traffic passes this way these days. This is a good thing when you consider that when the baboons heard our vehicle approaching, they turned tail and literally took off showing only their pink heels. I managed to get a fuzzy photo but we were thrilled that these animals are not being being spoiled by humans any longer! 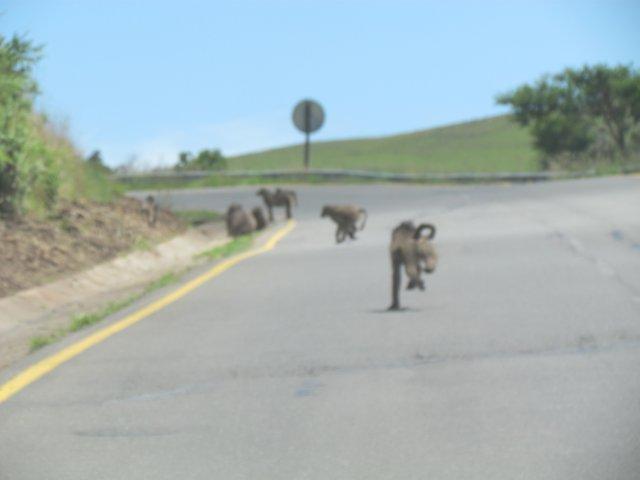 At the top of the mountain pass, is Sterkfontein Dam which supplies Gauteng with water.  Apart from its practical  purpose, I just LOVE this massive body of water for the photo opportunities it provides. Not that we've ever often stopped for long enough for me to photograph it at length, but I have taken quite a number of photos from the back of the motorbike. This time I thought I would take my chances from a moving vehicle. Was I pleasantly surprised when I downloaded the photos... 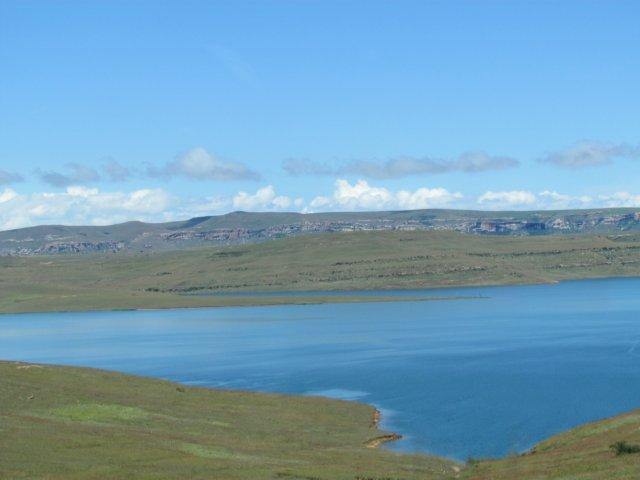 Not only is this a massive expanse of water; on a calm day like it was that day, the water is a deep blue too 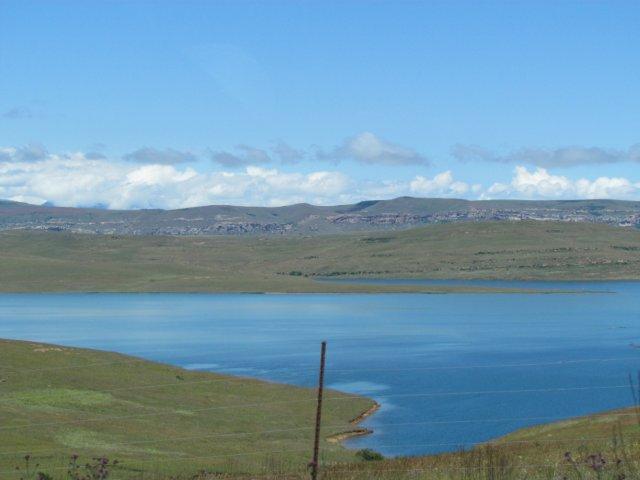 Driving home through the Golden Gate Highlands National Park    which I've posted about many times before, we stopped at the SANParks camp and cafe to buy a bottle of water. The name is derived from the sun which reflects off the sandstone cliffs, especially the imposing Brandwag (Sentinel - not to be confused with the Sentinel Peak I posted about above) which stands guard to the area. 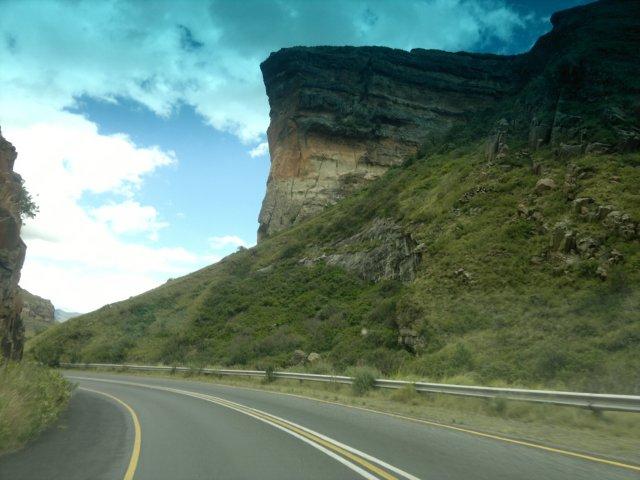 A kilometer ahead is another specifically shaped mountain/rock formation: Gladstone's Nose. If you click here, you can read my post about how this rock got its name. 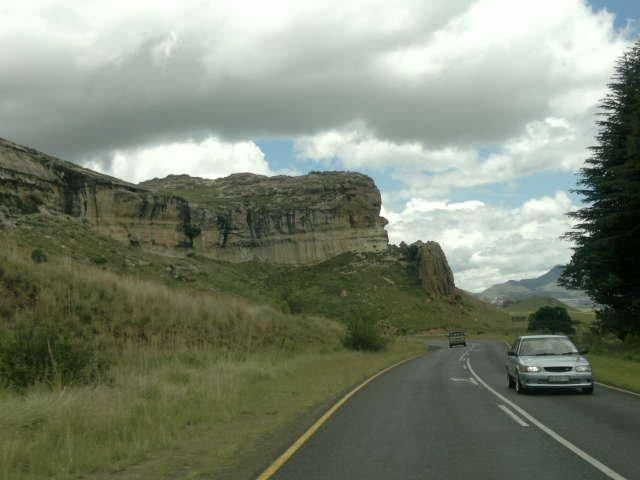 I hope you're all having a wonderful week.