As fellow bloggers and especially like-minded birders may remember from my post, I often refer to Jez who identified this or that bird for me. We met him when he came to tender for the catering job at the Guest House in August.

Ever since then, I've sent him photos of birds which we're not sure of or which we cannot identify at all. Jez belongs to a Tanzanian Bird Club and if he's not too sure about the bird, he sends it onto friends of his who peruse it and send the verdict back to him.

Apart from helping me with bird ID's, Jez has also become a good friend of ours. Whenever we fly out of or into Dar Es Salaam, we meet him at the George and Dragon for a quick catch-up. Apart from enjoying his company (he's been in East Africa since 1998 and has many hilarious and interesting stories about running camps all over the continent), we also enjoy the ambiance of this English expat pub and grill.

On our last trip in, when we met Jez, he had another expat with him. Greg has a vast store of fantastic stories about his life as an exploration driller in Africa. He's told us fascinating stories of how he and his wife socialized with the first president of independent Tanzania, Julius Nyerer. He also remembers visiting with people whose children were then still young and who subsequently became cabinet ministers of this country. In between my mouth hanging open at this man's anecdotes, I actually remembered to take a photo of the the men as they chatted together in the courtyard of the George and Dragon. 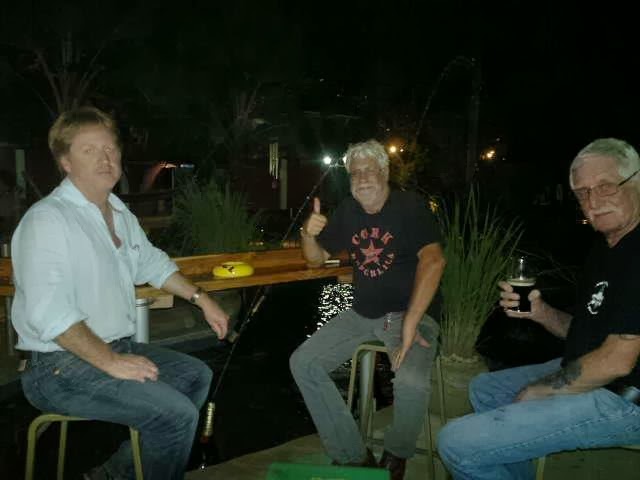 Greg, left, Jez in the middle and Grant to the right of the photo

I hope you're all having a wonderful week.
Posted by Jo at 3:30 AM