We have a new little dog at the Guest House. Nando is the last of a litter of seven pups which Honey produced before I assisted the vet to spay her and from which she subsequently died. It was my intention that after her operation, Honey would go back to the Guest House property (where she lived for two years as guard dog until she fell pregnant while I wasn't watching!) and guide her last little pup as he grew up. Sadly this was not to be. 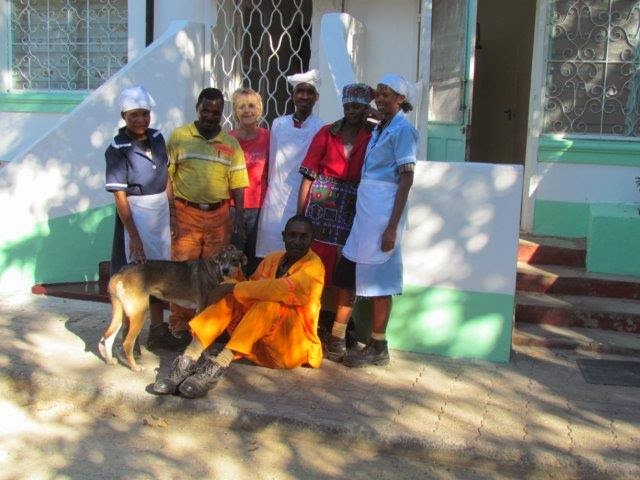 Honey in a Guest Staff photo (she was staff!) with Michael, now my house askari, gardener and cat-carer petting her

Meanwhile, I and several other Mzungus tried to befriend the little dog with no success. He loves Michael, my second chef, Armani, assistant chef and adores Zacharia who arrives at 6.30 every evening to do his duty as night askari. I know exactly when Zacharia has arrived because I can hear Nand's excited  barks as he greets his friends. Every day when we went over to lunch, Nando might be lying near the driveway; if we looked his way or I bent down and tried to pat him, he'd run off into the garden, yelping hysterically.

One morning I went over to the Guest House to give Paul and his team the days' instructions. When I walked back down the driveway, I spotted Nando lying on his back, tummy exposed to the sun. I crept up to him and gently stroked his forehead. At this he leaped up, moved off into the garden and sat down to look at me. Nando's and the other security dogs' food had been cooked; a pot of boiled meaty bones and a separate pot of cooked maize stood on the ground beside me. I took a lump of maize porridge, dipped it into the meaty juice and walked slowly towards Nando, holding out my hand. He came forward  and took the food from my hand. I repeated this twice more, allowing Nando to lick my fingers;** all the while I spoke softly to him saying his name which encouraged him to look up at me.

The next day, I dished a small saucer of beef strips from the lunch buffet and went into the garden to look for Nando. There he was sleeping on his back, tummy exposed to the sun! I held a piece steak to his nose, and he opened his mouth and swallowed it. By the second strip of meat, he opened his eyes. Then he rolled over, sat up and ate the rest of the meat from my hand. Once again, I kept talking softly to him and saying his name.

As I walked back in the direction of the Guest House kitchen, I heard a sound behind me. Turning around I saw that the little dog was following me! 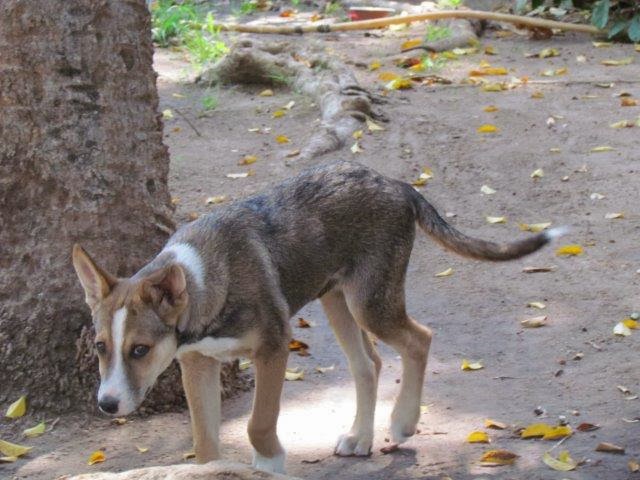 Nando stops as he sees me turning to look a him 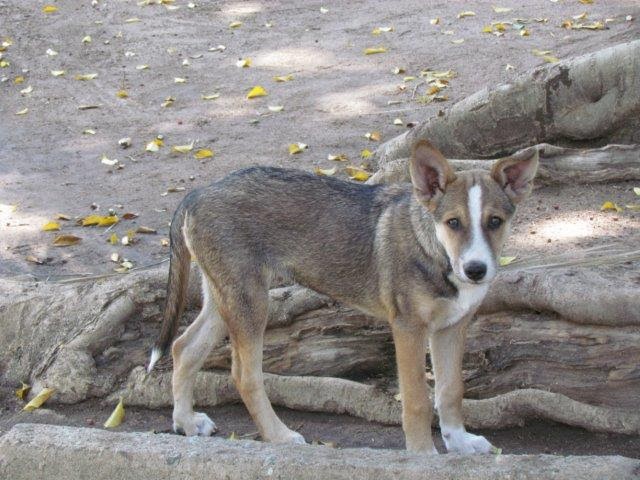 Although I called him softly by name, he wasn't coming all the way!

I returned the saucer to the kitchen and chatted a while with the staff, who were all very busy cleaning, washing breakfast dishes, preparing the vegetables and other food for lunch.

As I opened the screen door leading out onto the kitchen steps, guess who was waiting out there for me? 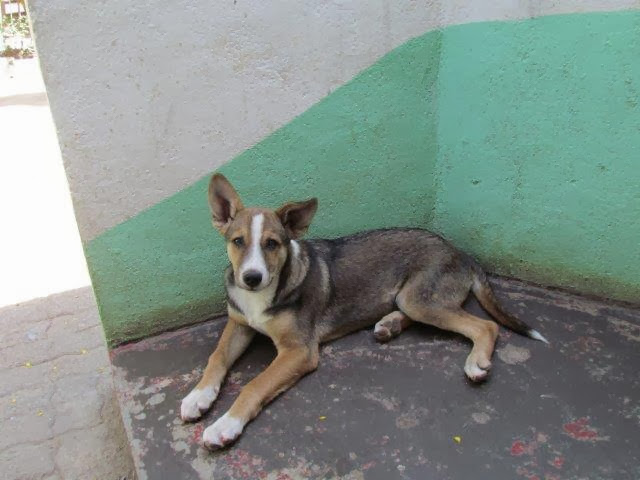 Nando came to the kitchen area for the first time in his short life at the Guest House!

It's now become a daily ritual: I take a saucer of tasty meat treats to the garden, sit down on my haunches, and wave a piece around the nose area of the sleeping Nando. By the second bite, he wakes up, sits and eats the rest from my hand.

Although he allows me to stroke his head while he eats, as yet, any sudden movement still causes him to jump up and run off into the garden. I 'm hoping that the fact that I am feeding him tidbits and speaking to him at the same time, in time he will relate to my voice, begin to trust me fully and be confident enough to come to me without being tempted with a treat.

I hope you're all having a wonderful day.

** Blogger author's note: I do wash my hands thoroughly after feeding Nando!
Posted by Jo at 3:30 AM