As usual, the weekend in Mwadui was peaceful, restful and interesting. We went birding (twice: an hour on Saturday morning and another hour-and-a-half on Sunday morning); we also saw amazing birds last weekend but because of my erratic Internet which turned out to be a physical wiring connection error on the WiFi modem, I didn't post on Wild Bird Wednesday last week. I will be posting this week, for sure!

As usual, we went to the club on Saturday evening and while we ladies sat around the round table (doh), the men were glued to the England/Australia rugby match. I took a large foccacia and beef sausage snacks and Hot English Mustard as snacks. Louise wanted a photo of our [regular] group; we all posed - husband's included - and then we realized that Amanda's husband, Andre wasn't with us. He was almost on top of the TV shouting at the biased ref! We called him and while we had several photos taken, Louise, who could see the screen, promised Andre that there was no try being scored. As we finished and he returned to his post, we saw that a try had indeed been scored. We all apologized, laughingly, to Andre! 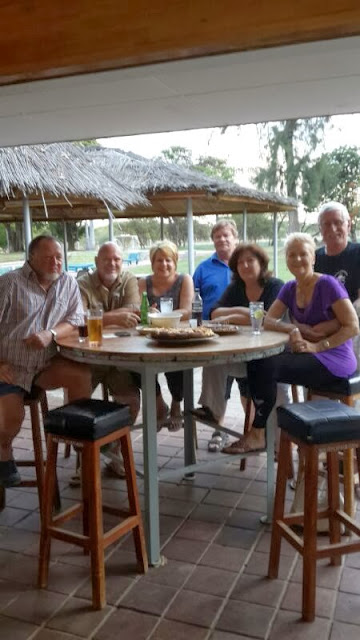 A select group of friends; from left: Thys, Wessel (our IT friend!), his wife, Louise; reluctant poser, Andre, his wife, Amanda; Grant and moi!

On Sunday morning, we went out for an hour-and-a-half and had a really enjoyable outing. When Grant dropped me off at home, I immediately prepared for a potjiekos meal which the Mzungu Expats had asked for. Michael had started the fire in our backyard, Regina had prepared the vegetables for me yesterday and all I had to do was to add the oil to the two pots (we had one chicken and one vegetarian potjie ) I've posted about this before: it's a crazy South African method of cooking a meal outside in a three-legged cast iron pot over coals.

By 11am when Grant came home from the office, the coals were ready to be placed under the pots, I added the vegetable oil and we were ready to go. Within a few minutes, Johan emerged from his cottage behind our house and Thys arrived from his quarters over at the Guest House. The men love potjie as they can fiddle with cooking as well. 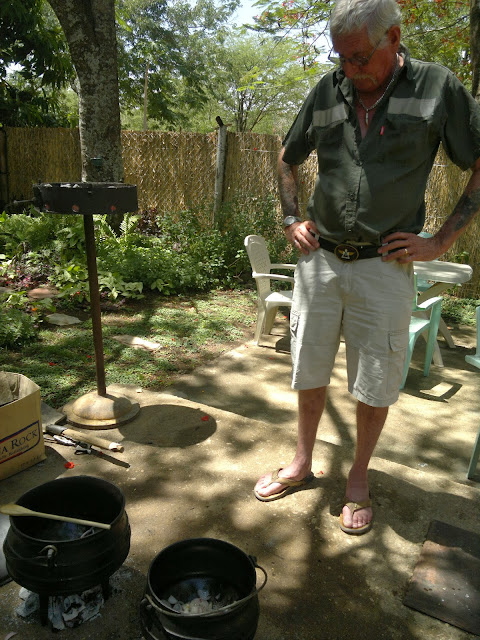 Grant checking on the first vegetables to go in: onions 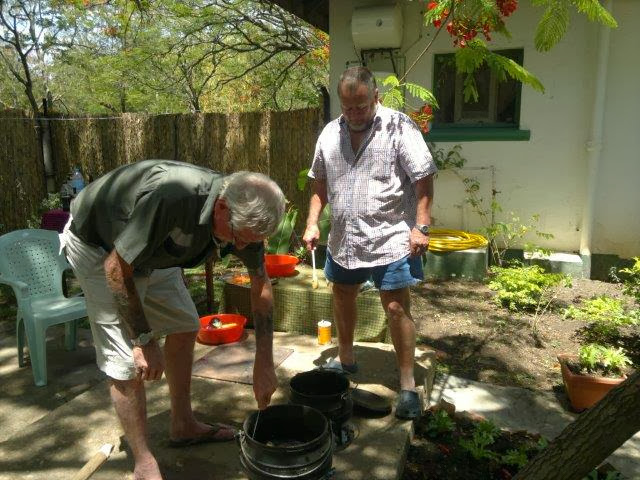 Grant stirs in the chicken and herbs, while Thys takes charge of the vegetarian potjie 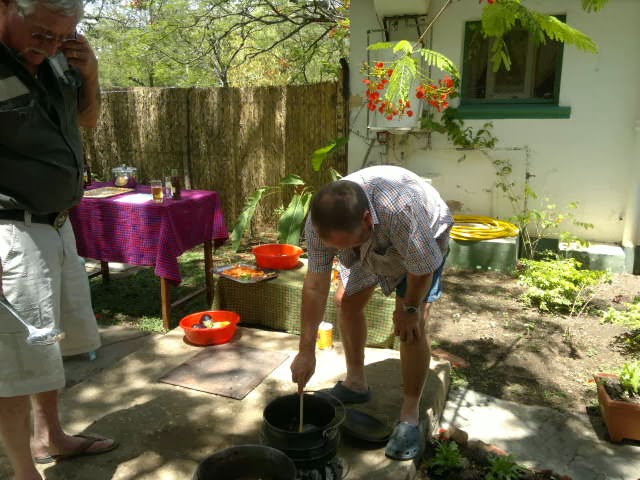 Thys gets down and does his job!

A great day was had by these men who need a little light relief from running a mining project 24/7!

I wish you all a wonderful week ahead.