More lifers in a weekend

Once again, Grant and I drove out for a spot of birding on the mine, the first time on Saturday morning; the second outing took place on Sunday morning.

As usual we drove slowly along the bush road on the way to the dam. There seem to be many birds on that water body at the moment but keeping our eyes peeled, we weren't disappointed with the birds we spotted on the way there.

The first bird we saw was a raptor quite a way from the road. Grant stopped and I got out, walked a little closer and managed to get a few shots. 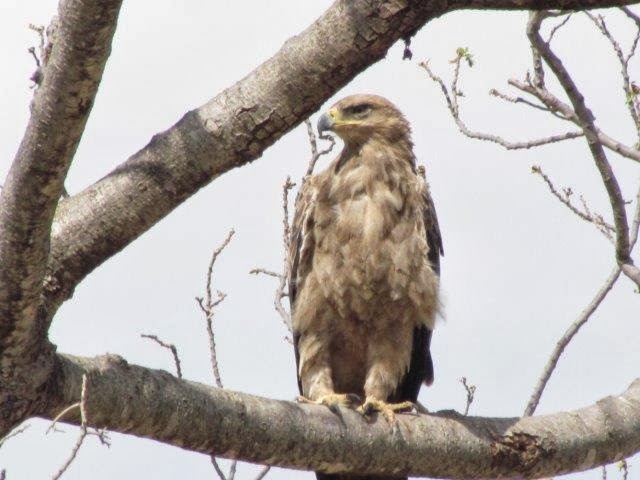 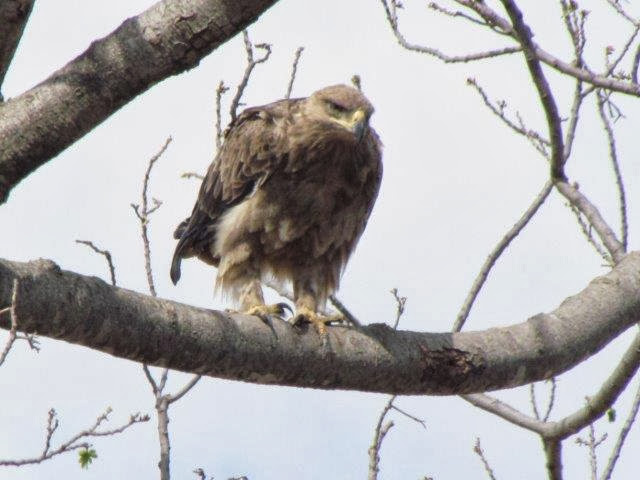 On the way back from the dam, we noticed that the same bird was still sitting there and another (it's mate?) sat on a branch lower down. 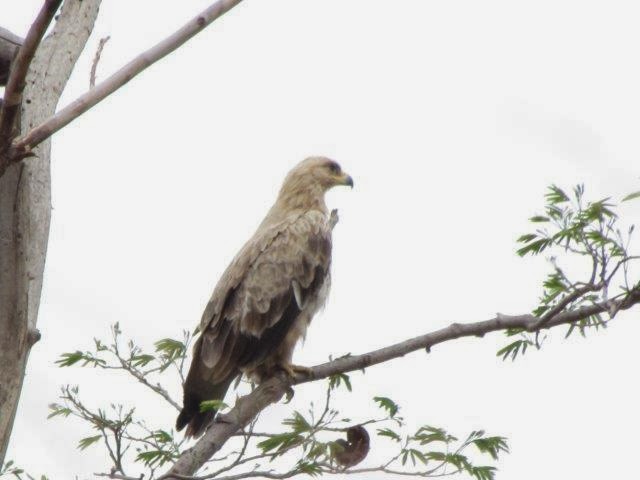 Another Tawny Eagle on a branch below the first one

As we watched (and I took photos) the first bird hopped up onto a branch higher in the tree. Then a Pied Crow flew in and began to taunt the Tawny Eagle. 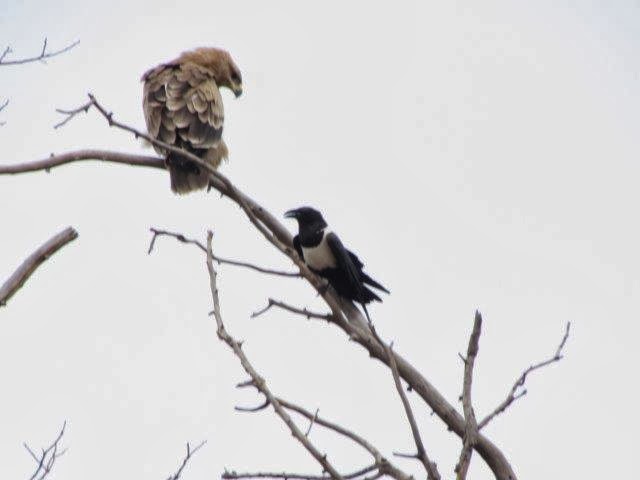 After the Tawny Eagle faced the Pied Crow off, it flew away, but not for long. Soon it was back and landed on the opposite side of the eagle. 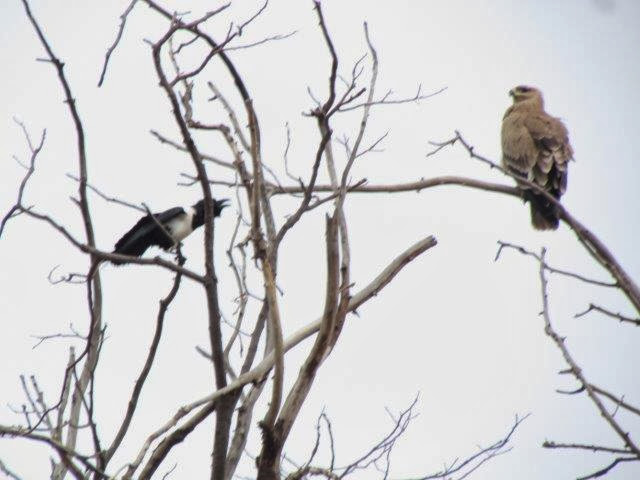 After a final telling off from the eagle, the crow eventually flew off into the distance. We wondered if these two eagles were indeed a pair and had chosen this tree to nest in - eventually.

After this interesting sighting we meandered on through the bush. With the window open, we can normally hear the bird calls and within minutes we heard the screech of Yellow - collared Lovebirds. Sure enough, when we stopped I managed to get a quick photo of one bird in a small flock before they all flew off. 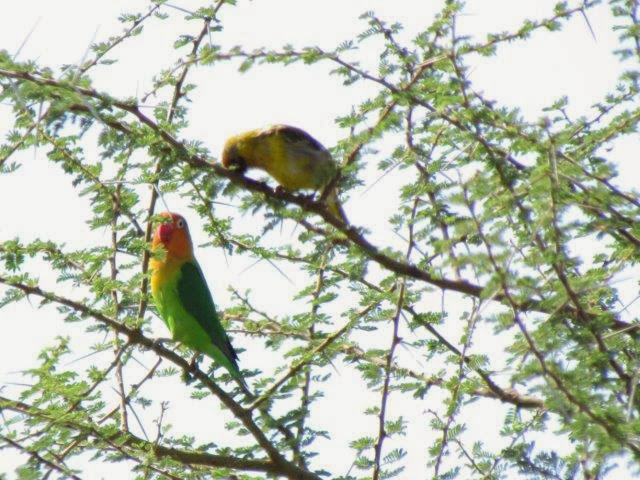 A Yellow-collared Lovebird with an identified weaver behind it!

As I focused on the Lovebird, Grant pointed out another bird a bit further in the bush. 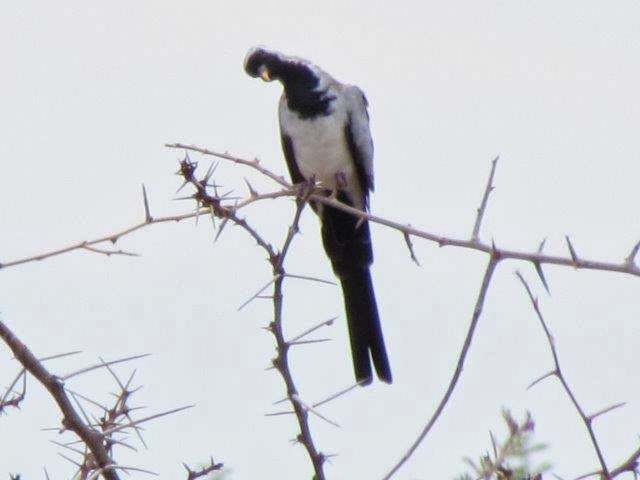 A Namaqua Dove (male) seems to be looking straight at us

We drove on and as we've been trying to photograph Blue-naped Mousebirds (not a lifer, but we love spotting them) I suddenly saw a flock of Speckled Mousebirds flying into a small tree. They flit around very quickly but I eventually managed to get some photos. 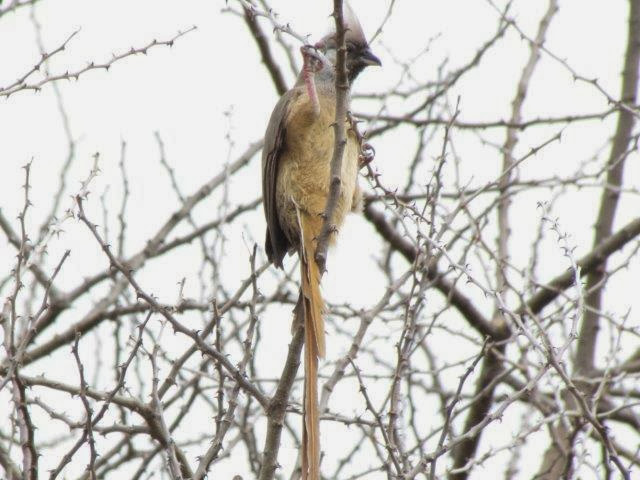 Once again we moved off along the dirt road through the bush. (Birding is not something to be rushed!) Suddenly I pointed out a "different" bird in a tree near the road. Grant stopped and I took several photos. When I downloaded the photos, we weren't at all sure what we'd seen so we sent them off to Jez for identification. His answer was exciting for us: A Red-tailed (Isabelline) Shrike. Although we'd seen a Red-Backed Shrike years ago in the Nubian Desert, Sudan, this particular bird was a lifer for us. 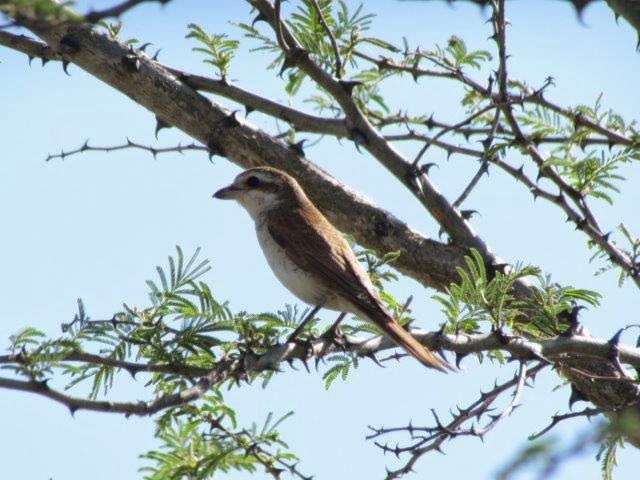 Before we arrived at the dam (only about 4kms from town) we had seen several birds. 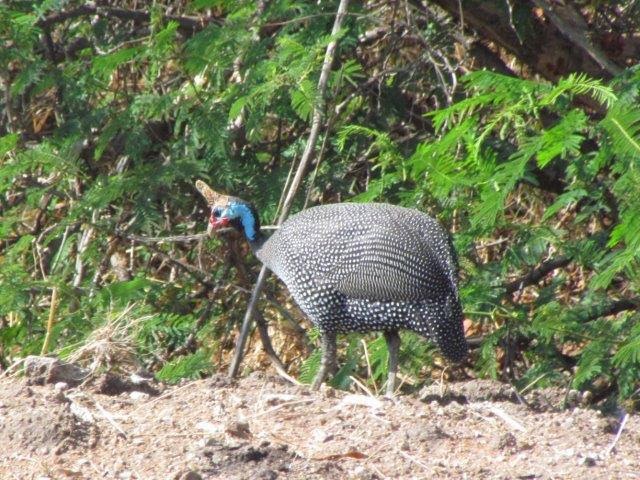 A pair of Black-headed heron 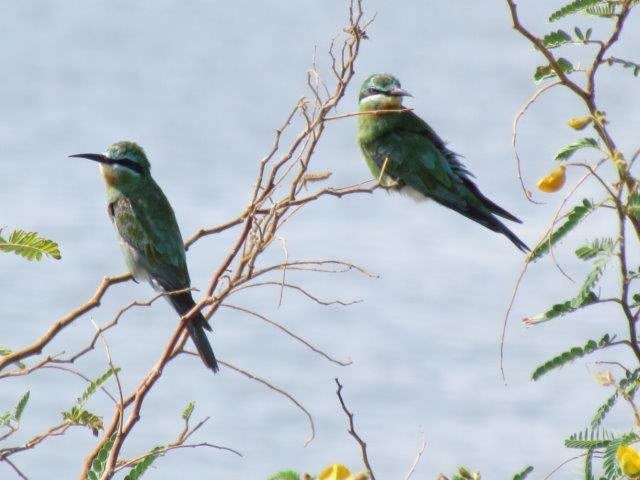 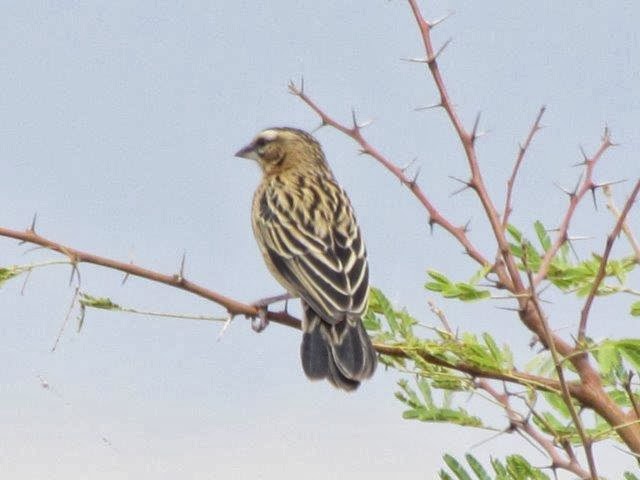 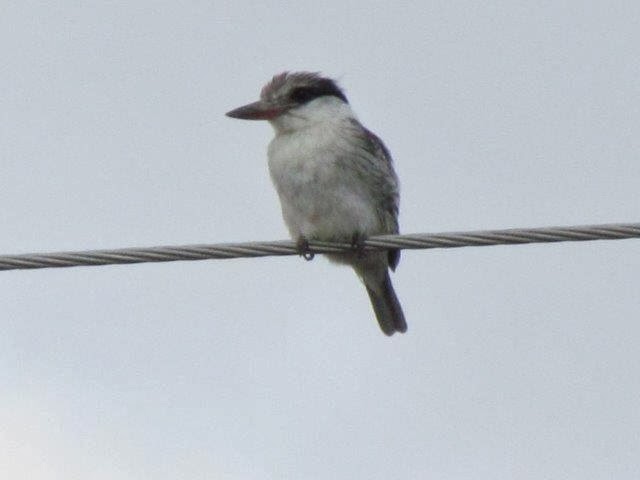 Once at the dam, we stopped the vehicle, Grant scanned the water and edges with the binoculars. I got out and crept towards the water (taking care not to sink into the glutinous clay!) and took photos. 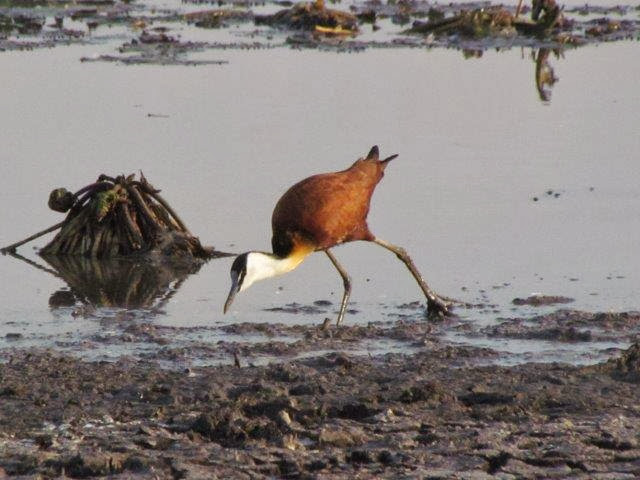 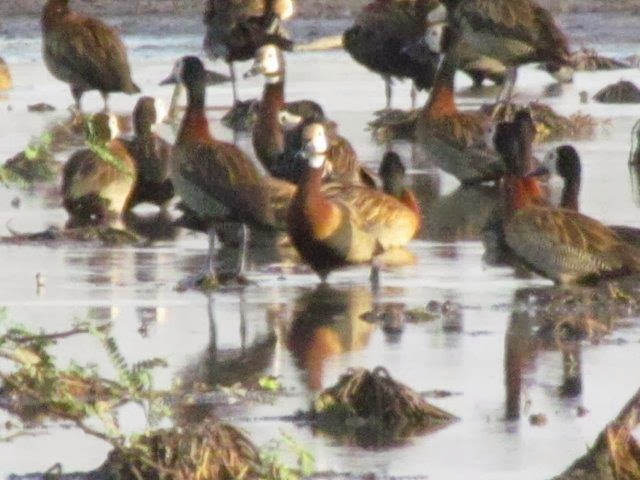 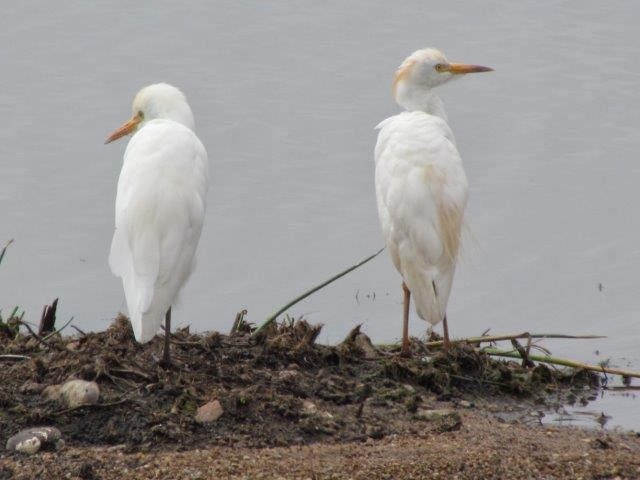 Cattle Egret (the one on the right is a breeding adult) 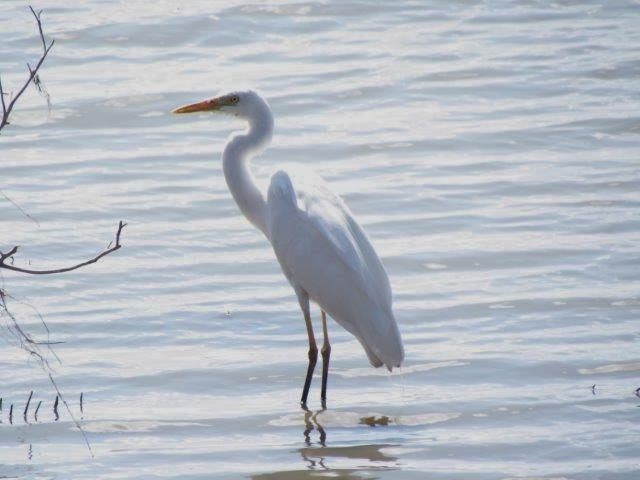 Yellow-billed (Intermediate)Egret; the tops of its legs are yellow, showing a non-breeding adult 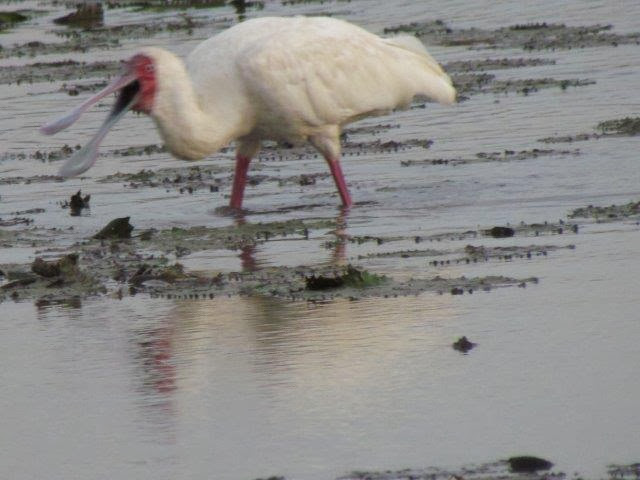 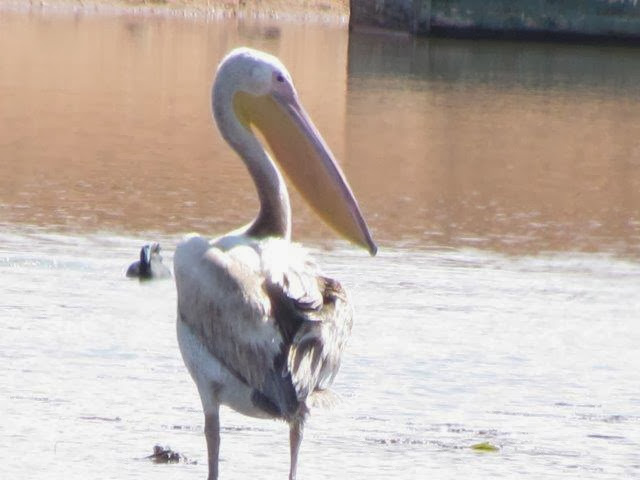 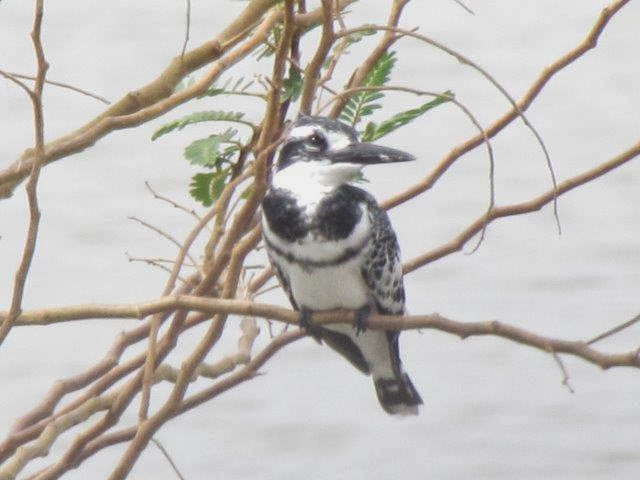 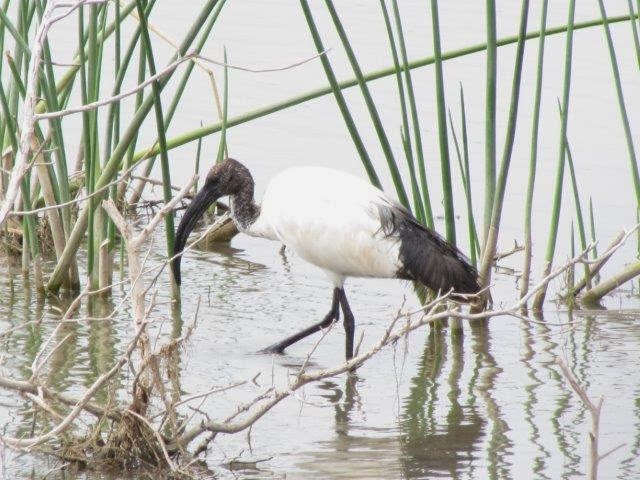 It was while I was photographing the Plover and Ibis that I noticed a large black storklike bird on my screen. Using the binoculars, I focused on the bird before handing the glasses to Grant to hear what he thought. Meanwhile I snapped away at the bird. When I downloaded the photos at home, we checked on our Birds of Africa South of the Sahara and found that we'd spotted an African Open-billed Stork. A lifer for us! 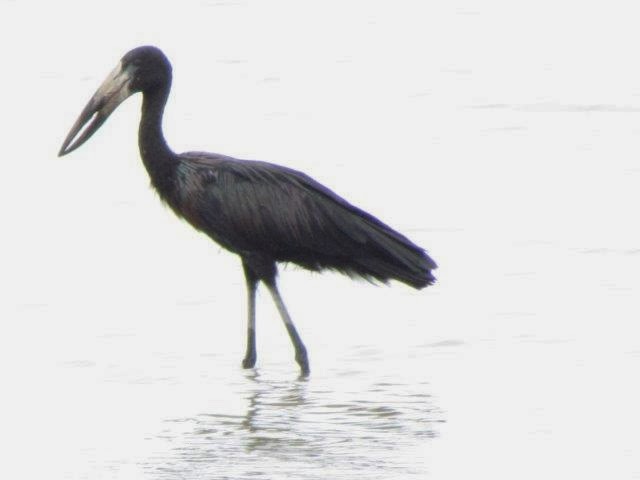 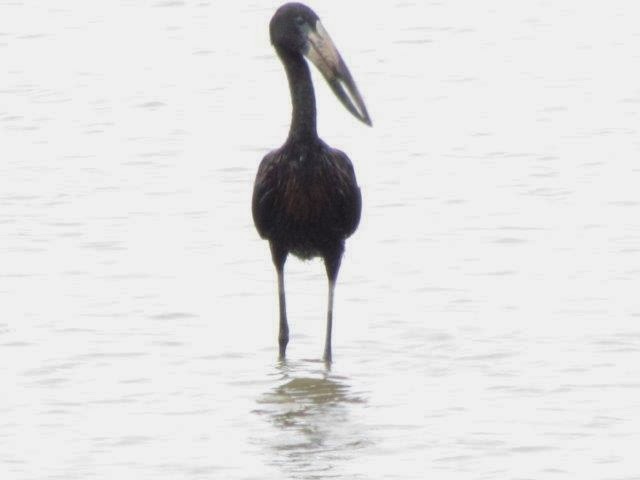 Like the African Spoonbill, the name speaks for itself

Then it was time to wend our way home. But not before I'd spotted a flock of LBJ's. (Little Brown Jobs) in a thorn bush ahead of the vehicle. Being my favorite birds to try and identify, I took several photos to go and check up at home. LBJ's are also very difficult to id at times, so I eventually gave up and Grant sent the photos on to Jez. His verdict: 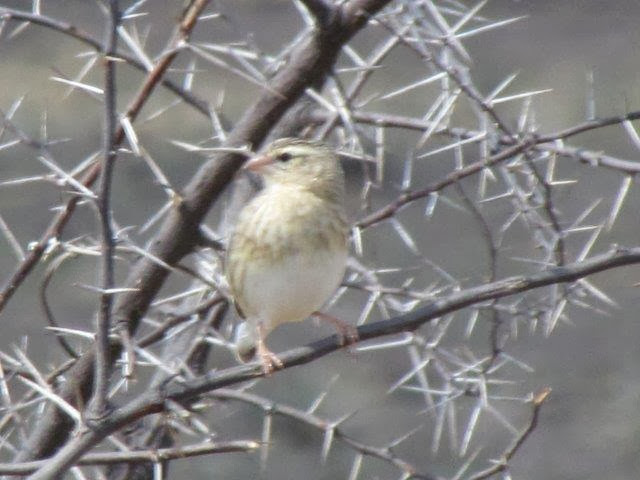 Cardinal Quelea (Female) : a lifer for us

I'm linking my post to Wild Bird Wednesday, hosted by Stewart which you can access by clicking here
I hope you're all having a great week.