As mentioned on Saturday, I 'm always up at 4 aa; I feed the cats in my bedroom. Once I put Tipsy - who, at night,  has the run of the other wing in our house,  away in his boudoir for the day, Only then do I let our three out. I open the kitchen door where Chappie waits for a tidbit of the same meaty chunks in sauce or jelly which my three cats enjoy. Then I open the door leading out onto the patio where I'm greeted most profusely by my rather large pup, Skabenga. I feed him and while he's eating, I pop into the bedroom and dress in my tackies, exercise pants and loose top. I leash up Skabenga and only THEN do I open the garage door where Eddie spends every night. Trying to curb the enthusiasm of an excited Labrador while an elderly, but ultra-fit Jack Russel hurtles around the patio, just doesn't work!

On Friday I first placed  the large farm chicken - already stuffed and seasoned - in the oven. The gammon went onto the stove top and had to boil for 55 minutes. I checked all was in order and then went outdoors, grabbed Skabenga's leash from his mouth and led him out into the street. Eddie always takes off like a streak of lightning.

On the return from our walk, a blast of hot air greeted me from the kitchen along with the delicious smell of roast fowl. The bird was stuffed - rear end and breast opening - with pork, sage and onion forcemeat; I'd draped streaky bacon across the entire body and secured all with toothpicks.

Only one problem, when it was done, I forgot to photograph it!

The gammon was cooked through so I glazed it with apricot jam and olive oil; stuck pineapple rings with a whole cheer in the center to the roll and grilled it just before lunch. 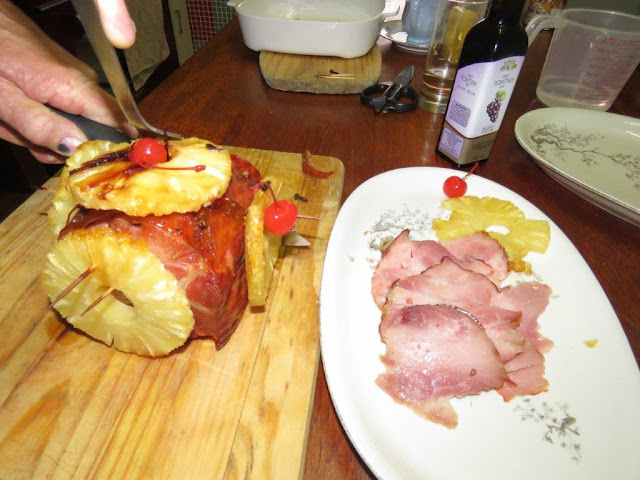 The gammon, glazed and decorated and cooked to perfection!

I'd cooked rice and roasted potatoes in with the chicken but no other cooked vegetables were served. However, while Grant was in hospital at the beginning of November, he'd found a recipe in one of the many magazines I brought him to stave off boredom. We decided to have this salad as a green accompaniment to the dinner. 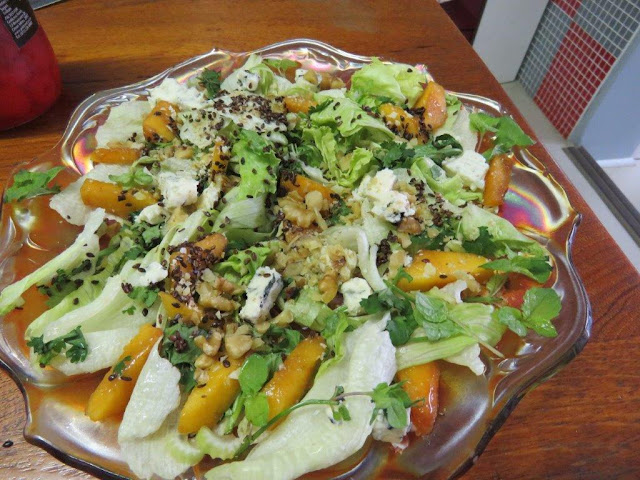 Before I forgot to photograph our beautiful Christmas table, I took the photo below. Believe it or not, these two ladies were actually having a friendly chat, although it looks anything but! 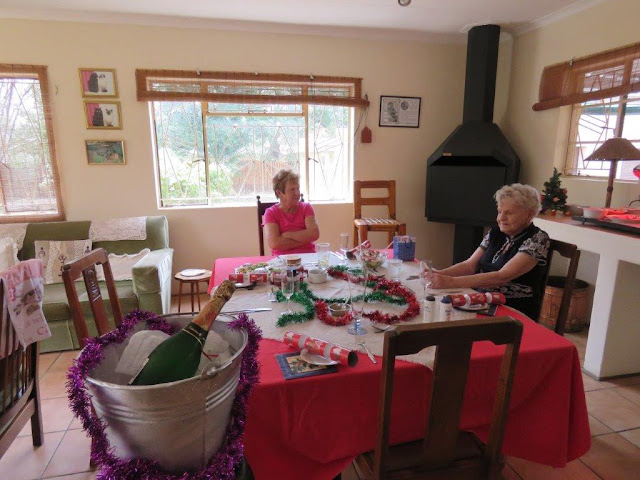 Our Christmas table set with crackers, tinsel and a large galvanized bucket with champers on ice

Every Christmas morning, Grant and I make trifle using his paternal grandmother's recipe. The pudding was supermarket bought and microwaved for three minutes before serving 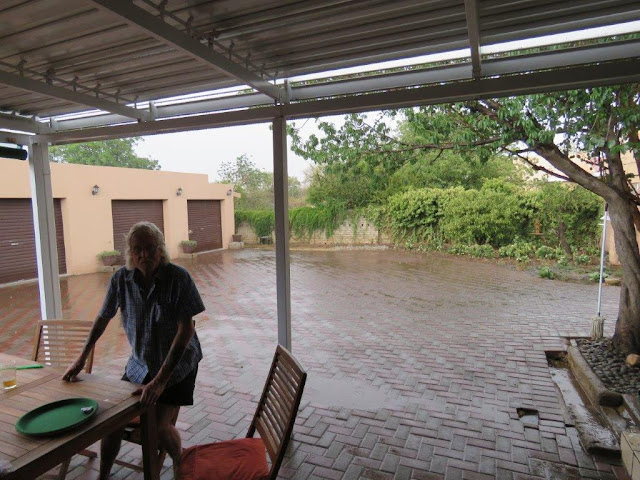 After lunch we sat out on the patio to enjoy the rain. We had about 5mls of rain - not much - but it cooled the earth for a few hours