Contrary to always saying that I don’t kill anything [in my garden], I have to come clean here and now. I have to admit to all reading my blog I had a major killing spree on Wednesday.

I grabbed the fly swatter, climbed up onto the kitchen table and after a few maniacal swipes, managed to connect with the bee. I stunned it; it fell to the floor where I slid it onto a piece of paper and threw it out of the window. A few minutes later I heard a buzzing sound again. Perplexed, I looked up and sure enough, there was another bee buzzing around the tube light.

Before I could get up onto the table and repeat the performance I had with with this bee's predecessor, it made a bee-line for me. (excuse the pun!) I swatted it with my hand, connected with the insect which then also fell, stunned to the floor. Once again, I scooped the dopey bee up on a piece of paper and threw it out of the window.

I continued preparing my dinner with no further interruptions. 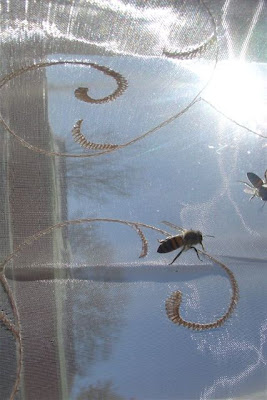 When viewing the bees on the net curtain here, it doesn't look as if there were many. They were in fact, moving so fast and I was trying to encourage them to go out and at the same trying to take photos of them 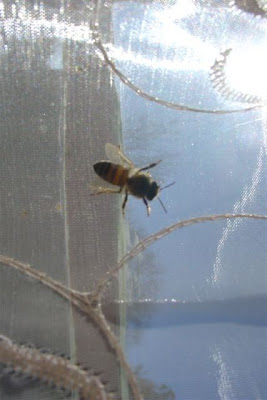 The weather was unseasonably hot this morning, and the sun caused the bees to crowd on the window pane, all trying to get out

Next morning, however, the sun was high in the sky already and I was engrossed in blogging here in my office. Suddenly I heard a buzzing sound... I looked out of the window, thinking perhaps the two bees I had stunned and forcibly removed from my home the previous night, had regained consciousness and were intent on gaining entry again. Not so, instead of two slightly concussed bees, there were dozens of bees on the inside of my window pane, obviously trying to get outside on their own steam.

To be fair to myself, at first I opened the windows, and using the net curtain, tried to guide the bees out. A few flew out but many more took their place. Then one cheeky blighter came straight for my face! Now I really went to war. Grabbing the fly swatter once again, I flailed out left, right and centre until the office floor was strewn with bee corpses.

I’m not afraid of, or allergic to, bees. Not at all. And, as my regular readers know, I don’t kill anything. Here, though was a case of them (hundreds by now – and beginning to agitate because the office was heating up in the morning sun) or me. And I know whose side I was on. Ha! 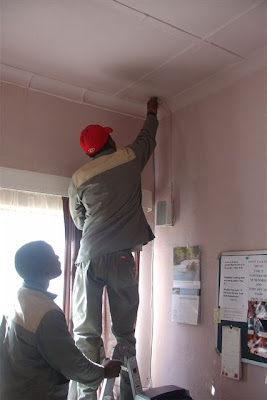 Ever faithful and so helpful, John and David came inside to help solve the problem of the bees. David (on the ladder) is a competent handyman and attends to all the repairs in and around the house and garden.

Because I realised by now that the bees must be coming from somewhere INSIDE my house, I called the gardeners inside and asked them to help me look for any holes, or bees crawling out of crevices in the walls. When I changed my Internet provider in April, the post office technicians came and removed the satellite dish which powered by previous internet. They removed cables which ran from my office into the ceiling and from the office, through the wall to the dish outside. They filled the holes, but David had to plug up three more holes which might or might not have been here all along.

Still the bees continued to arrive...

I did a stealthy inspection in the kitchen walking around all four walls, peering into what looked like cracks to me. 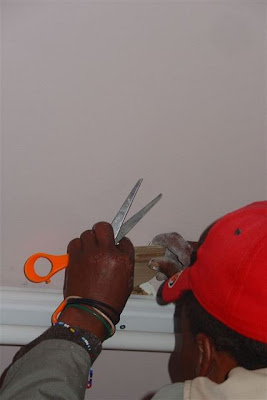 David ably repairs a hole next to the flourescent light

Until I came to the last wall.

The wall with the closed-off chimney.

When we bought the house nine years ago there was anthracite stove in the kitchen. A lovely old Aga. I used it for two years until the cost of the fuel and the inconvenience of cleaning this old girl became too much for me. I spoke to a builder in town and one Friday evening he brought six men with him. They dismantled the stove, filling my kitchen and office with black powdery anthracite dust in the process. Then they manhandled it out of the house and onto the back of the builder’s pick-up truck. I gave him the stove as payment for removing it.

The stove was out but the chimney opening remained. The builder closed the gap with a piece of aluminium. Recently however, this plating had, unbeknown to me, lifted on one side. As I stood and watched, a bee emerged from underneath the plate, then a second bee, then three, four, five bees. 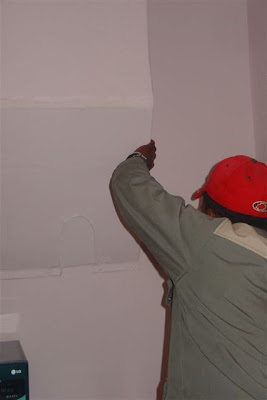 I spotted the bees emerging from the gap (where David has his hand) in the covering over the chimney
Eureka! I had found where the bees were coming from. When I called David and showed him the gap, he immediately plastered it closed. 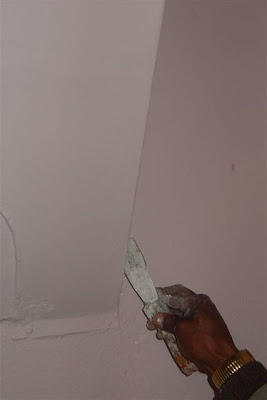 When the gardeners and I stood outside later that day and looked up at the chimney pot on my roof, we could see the bees coming out of it. Not angry or swarming, but just flying out and off into the blue.

I hope that’s the last I’ve seen of these little guys.


I'm not sure if anyone keeps bees as pets (lol!) but I've decided to post my experience with them on Pet Pride this week. For more Pet Pride click here