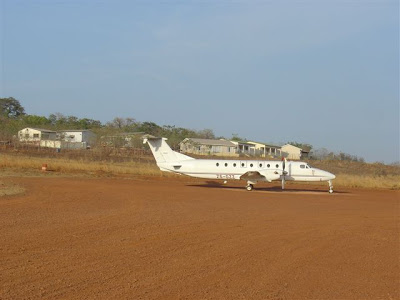 The light plane which flew us expats out of camp in Guinea to the International airport in Bamako, Mali

Air travel between countries on the African continent is fraught with frustration, exhilaration, exasperation and surprises. One such trip out from Guinea to South Africa on our break in 2001, my husband and I were the only two passengers in the light plane which flew us to Bamako in Mali. The first leg of the trip was between Lero where we lived and worked and Siguirri, the immigrations airport. To call a dirt airstrip with a wooden shack where your passports where stamped by a bored -looking official, while gendarmes patrolled the area around the aircraft with AK47's, an airport, is being romantic. However, our passports were duly returned to us and my husband and I, the pilot and co-pilot boarded the plane once more.
Once all the pre-flight checks were done, the propellers began to spin in earnest and the plane began taxied down the airstrip. My husband, seatbelt fastened, clutched his arm rests, leaned back in his seat and closed his eyes. Even after ten years of flying in all sorts of aircraft, he is still a nervous passenger. I, on the other hand like to watch the actions in the cockpit which was visible from the back of the plane. I felt the plane gain momentum and knew within seconds the nose would lift and we would be airborne. It always fascinated me how the co-pilot controlled the joystick while the pilot had a sturdy grip on the lever below his hand. I once asked the crew why they did this and the pilot told me that the co-pilot had to push the joystick to the ultimate so that the plane would lift off but if he suddenly panicked at the last minute or lost courage, the pilot was there to ensure this action would still take place and avoid complications.
That day as the plane began to lift off the ground, I saw a flurry of hands as the pilot pulled the throttle back instead of assisting it forward. The plane slewed dangerously across the runway. I glanced out of the window on the left and saw a huge black cow saunter across the airstrip. We had just avoided hitting it! Eventually, the pilots brought the plane to a stop. They unbuckled their seatbelts, stood up and came through the cock-pit door. Apologizing (huh?) to us for the inconvenience, they asked us to disembark. Everyone was visibly shaken. We climbed out of the plane and waited while the pilots checked the tyres. They had applied such drastic brakes that the tyres could be damaged. If so, we'd have to overnight in Siguirri while new tyres were flown in from Bamako.
Fortunately there had been a heavy rainstorm just hours before and the laterite surface on the airstrip was very soft. The tyres were undamaged. Boarding the plane once more, we fastened our seatbelts and this time the plane took off with no further problems. We landed in Bamako an hour and fifteen minutes later.
We breathed a sigh of relief and looked across to the airport terminal for our liaison officer to take us back to the company guest house. Our relief was short-lived because we were not met with our normal, highly efficient contact, Esau but with Amadou, a new man who spoke only broken English and had only begun to work for the company that week. And that's not all; as we entered the customs section, we could also see that this man didn't have the authority that Esau had. There was a lot of haggling, armwaving and pointing to us mentioning our company's name. Eventually the customs official, giving us a disdainful look, stamped our passports and allowed us through. As we waited at the luggage carousal for our cases, the locals jostled each other to offr to porter our stuff. We always declined. The airport is milling with humanity and we'd heard horror stories of expats who'd allowed these men to push their luggage in trolleys, only to get to out into the hot African sun and the "porters" had disappeared into the crowds never to be seen again.
Once we'd loaded our luggage into the company Landcruiser, we clambered inside the ten- seater stationwagon with seven other expats and their luggage. They had just flown in from their break on the international flight from South Africa. Squashed up against the others in the middle seat, with my husband next to his 2IC who was taking over from him while we were on break, we hurtled across the teeming streets of the Malain capital to the company guest house.
An hour and twenty minutes later we arrived at the guest house. Everyone peeled out of the vehicle and began to unload their luggage. The incoming expats would stay overnight in the guest house, flying out to the three mining sites the next morning. Just then the company manager came out of the guest house, and noticing me and my husband, asked Amadou why he had brought us into the city. Apparently we were supposed to stay at the airport and catch the next flight out. My husband, not the most patient of people, jumped back into the vehicle and told Amadou to get us back to the airport "viid, viid!" which is collequil French for "hurry up".

After travelling through the city and arriving at the airport once more, Amadou dropped us at the terminal. We entered the building for the second time that day. As we produced our tickets at the check in counter, we were informed that the flight we were booked on would not be taking off that day. The plane had minor problems and the ground crew was trying to repair them. In those years there was only one connecting South African Airways flight a week in Abidjan on the Cote d'Ivoire .(Ivory Coast) If we didn't fly out of Mali to the Cote d'Ivoire that evening, we'd be stuck in Bamako for a week. Even worse, if we weren't in Abidjan to board the South African connection at 8 that night, we'd spend a week in that city.
(to be continued tomorrow)
For more on This is My World, click here.
Posted by Jo at 4:30 AM