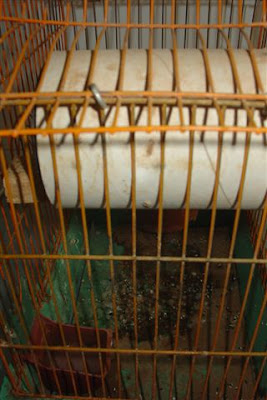 When I arrived at my husband’s flat last week, he told me that he was bird sitting two budgies for a colleague who has gone on six week’s leave to the USA.

The birds were very introverted and spent ALL day in the little nest attached inside their cage. Periodically they ventured out onto the plastic perch, but as soon as I entered our home office-cum-sitting room where their cage is suspended on an elbow, they’d dive back into the nest, falling over each other in their rush to ”get away”!

I spoke to my husband and together we agreed that the first thing we’d do was find them a new cage. In a large, sprawling and very busy African city in general and Khartoum in particular, this is easier said than done!

The next morning I e-mailed a photo of the existing cage to my husband at his office. He printed it and showed it to his driver who immediately said he knew where to get one. It would cost SDG35. (Thirty five Sudanese Pounds/ US$14)

Next morning the driver arrived at the workshop and said he’d forgotten the cage at home, could he borrow the Land cruiser and fetch it from across town. My husband told him to return the money; we’d find the cage ourselves.

Hubby came home early, collected me and we set off into town. (He had to collect a parcel from DHL, so we decided to look for the cage at the same time.)

While we were at the supermarket last Friday, he asked the proprietor where we could find a bird cage. He suggested Home Care in Amarat, an extension of Khartoum2. (Does it sound complicated? It is, I tell you!)

On Sunday, while waiting in the queue at the same supermarket, there was an Expat in front of us who was returning an item. When she turned to apologise for holding us up, I told her it wasn’t problem. Then I asked her if she knew where we could find a shop has products for dogs, cats, birds? She thought for a moment and then said, “Perhaps in Amarat?”

We arrived at Home Care and I went into the shop, while my husband kept the air-conditioning running in the vehicle. (It was 10h15 and the temperature outside was 42°C)

One inside, I realised that this shop would not have bird cages for sale. It was the most incredible glassware and gift shop I have seen since visiting similar ones in Conakry, Guinea, West Africa, while doing the Christmas shopping for the goldmine company. I posed my question to the person serving behind the counter, but the language barrier got to both of us. He called a man from behind the shelves of exquisite vases, ornaments and other glassware, who, without a word took me outside and pointed to a shop further along the street.

My husband drove me to this shop and I alighted from the vehicle once more. This is not such an easy feat. I am 5'4" and the Landcruiser is high off the ground. I have swing my legs out of the vehicle, hitch my skirt up without exposing my knees (hoo-boy, shorts are so much easier) and step down carefully, because of the mud puddles all along the street. 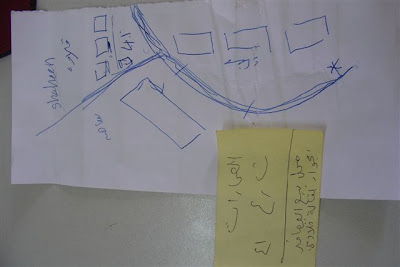 This hand-drawn map and Post-it with an address on it, was the beginning of the solution to finding a shop that sells birdcages

I entered the second shop where a gentleman, reclining on an easy chair had just dialled a number on his mobile/cell phone. He looked at me, then spoke into the instrument without giving me a second glance. I entered the shop interior where I found the other clerk sleeping on the desk. I cleared my throat softly; no response. I called out a to him; still nothing. Then I loudly said:”Salaam!" (good morning) He pushed himself up off the table, sat back with his eyes still closed and stretched his arms above his head. He opened his eyes and looked at me lifting his left brow in enquiry.

I told him what I was looking for. Again the language barrier stunted our conversation and he looked at me blankly. By now the first man had finished his conversation and ventured into the showroom. When I explained by hand signals and sound effects (“woof-woof, meow, and tweet-tweet”) what I wanted to buy, he called me outdoors and took me onto the pavement. There he spoke to a passerby obviously relaying my request. This kind gentleman’s face lit up and he called me to his side. Saying something, he pointed about three doors up the street. I couldn’t see what he was showing me but asked him to repeat what he’d said. Still pointing, he said:”3M”. When I climbed back into the vehicle and told my husband the shop where we should find our birdcage was called 3M he (Hawkeye Cohen, my hubby) said, “I can see 3M up ahead”

Arriving at 3M, we could see many items – electric fans, buckets, toys, ornaments - on the porch which told us this was a small general dealer. I entered the shop between two long counters running the length of the building. Behind the counters were shelves laden with toiletries, stationery, ornaments and electronic gadgets. The proprietor approached me and asked if he could help. When I told him what I was looking for (I felt like a gramophone already!) he, in turn, repeated my request to a tall gentleman who was making a purchase. This man asked me in halting English what I needed and now, instead saying “woof-woof, meow and tweet-tweet”, I said I was looking for a shop which sold products for birds. To illustrate my point I puckered up my lips and made kissing noises. Immediately his face lit up and he said to the shop owner I wanted a bird, but he said it in Arabic. When I asked him to repeat the word, he told me a bird is called “arriva” pronounced "ahreevah".

Now the proprietor joined in with great enthusiasm. He said you go to 41st Street, Amarat. He took out a Post-it/Sticky post and wrote what I surmised was an address on it. Brandishing it in the air, he said: ”This my brudda's shop, you get arriva” He showed me the symbols for 41 and gave me the Post-it. As I was leaving the shop, feeling as though I was getting closer to the “treasure” we were seeking, the owner called out to me: “You come tomorrow, I have cage here” Thanking him, I assured him if I didn't find his brother's shop in 41st Street, I would return to his shop the next day.

I climbed up into the Landcruiser again and told my husband we need to head for 41st Street. He knew where the street is and we headed in that direction. Turning into a street which he thought led into 41st Street, we drove all the way up it without success. Thinking we may have misunderstood the instructions, we stopped at a Currency Exchange, one of the many in Khartoum. A very friendly gentleman(the people in this city are very helpful) ushered me into the office where three other clerks were busy with world market transactions on computers and telephones.

When I handed the manager my instructions on the Post-it. He turned it over (I had it upside down!) and said: “Ah yes, number 27. “ So I said, no it’s 41! He looked again and said: “OK, 41st Street.” He took a blank piece of paper from his desk and proceeded to draw a map on it. First he indicated the street we were in, and then where, at a fork in the road, we were to go up 41st Street. He said there was a school on the left, and we’d see GLAD centre just beyond. There would be a bookshop on the left (he showed this by patting his left arm) and an ice-cream shop up ahead. He saw me out of the door, waved to my husband who returned his greeting. I entered the Land-cruiser for what seemed like the umpteenth time, and showed my husband the map.

We entered the complex, past a bookshop on our left; and up ahead was... yes, you guessed it: the Ice-cream shop! As my husband stopped the vehicle I jumped out and entered the shop. After waiting a few minutes for the other customers to be served, I showed the gentleman my Post-it and the handwritten map. He said: “After (behind) this shop”

I returned to the vehicle, which was mercifully cool, and told my husband we need to drive behind the ice-cream shop. As we parked outside another small shop, I alighted and went inside. Once I’d handed the slips of paper to the young man at the till, he read it, nodded and came out from behind the counter. He gestured for me to follow him outside. I did, passing an older gentleman who sat on the veranda swotting flies.

We rounded the corner, and there was a large steel door, like the roll-up doors used on garages. It was closed. He began to punch a number into his mobile/cell phone but before he got an answer, another gentleman emerged from between the buildings. He bent down and unlocked the door and together he and the young man rolled up the door.

To be continued tomorrow...