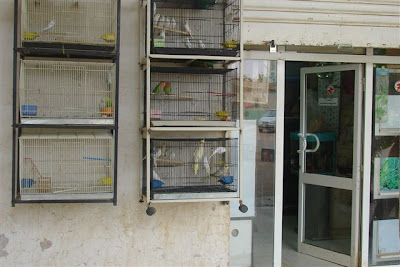 Birds in cages hanging outside the shop which my husband and I criss-crossed the city of Khartoum to find. We were in search of a birdcage for the budgies in our care
Yesterday I posted about our quest to find a birdcage in Khartoum. I left off at the part where I'd arrived at the address I'd been given in town and was waiting as the owner of a shop and a younger man rolled up the steel door. You can read all about this here. Now read on... 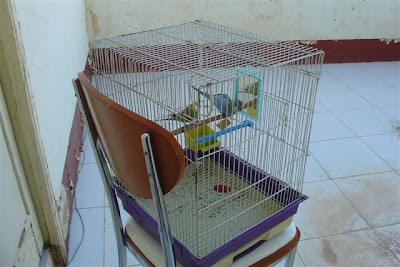 Our little birds love being on the balcony of the flat.

I called my husband and together we entered the shop. Apart from many tanks of exotic fish lining the walls, there was row upon row of birdcages hanging above our heads. We had found the shop which sells BIRDCAGES! Whoo-hoo.

My husband asked the price of the cage I picked out for our progenies back home. The shopkeeper told us. SDG300 / US$122. Phew, a bit steep. I made another choice and we were told it costs SDG100/US$41. My husband nodded and the cage was lifted down. Seeing there were no feeding or water troughs or a swing, (which the other cages had) my husband asked if he’d put them in for the price of the cage. The owner said: OK and fitted the necessary accoutrements which make for healthy and happy birds. I asked whether he had a mineral block and a bell but after pulling all sorts of items from a drawer under the fish tanks, I realised he didn’t have these items. My husband said he’d get a mirror from the little cafe/general dealer in our street and we’d have to hunt the bell and mineral block down on another day. He paid for the cage and after thanking him profusely for the birdcage, we bid him farewell. . (I’d shown him the Post-It and asked if he knew the gentleman from 3M, to which he replied, “Yes, my brudder”) Just goes to show the old adage still holds true: It's not what you know that counts, but WHO you know! (LOL) 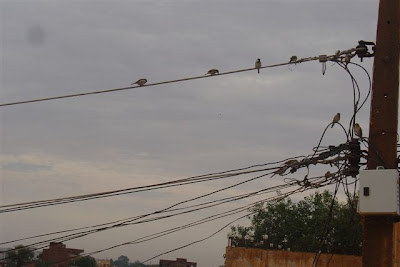 The wild birds sit on the electric wire above the balcony. They originally came to peck up the seeds that the budgies scattered on the floor. Now I emty the seed trough onto the balcony for them

We came home, washed the dust off the birdcage and set up the food and water trough. There were two plastic perches, of which one broke immediately so we fixed two wooden dowel perches into the cage as well. I suggested to my husband that we do not place the nest from the old cage in the new cage. He was rather reluctant as he thought they needed it. I felt they’d never come out of that nest, especially seeing after we’d uprooted them and placed them in a strange house. We agreed to try them without the nest first. 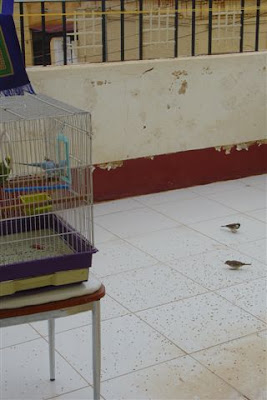 Note the sparrow weavers and sparrows pecking away at the seed I dispense on the floor
Now I had to get the birds (who trusted me not one iota) from their old bungalow into their new palace. I placed the cage on the kitchen counter top and inserted my hand into the cage. The birds went crazy, fluttering up against the far wire and screaming in protest. I got the blue lady out first who tried to bite me, poor little thing, and into her new abode. Then I scrabbled inside the cage and got the green lad out, He really hooked into my finger but before he could really bite me, I had him installed in his new home. 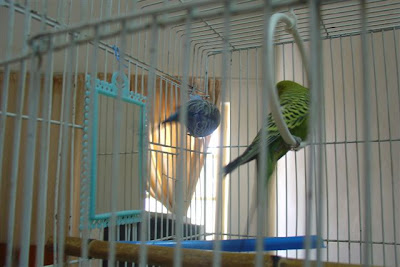 They spent a few hours, fluttering about in the cage especially when we entered the room. Eventually they settled in and even have mirror to admire themselves in now. (Mind you, the little female causes a riot when the male tries to get near the mirror. Is she preventing him from looking at another woman? Ha!) Within a few days, these little birds, which we’ve named Billy and Sweet pea, have become much more confident and outgoing. Oh, and hubby and I have agreed that we'll not be replacing the nest just yet... 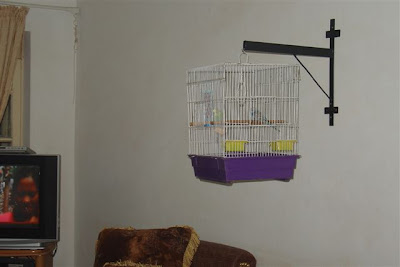 The birds love watching television and will sit for ages staring at the screen
For more Pet Pride click here.
Posted by Jo at 4:30 AM