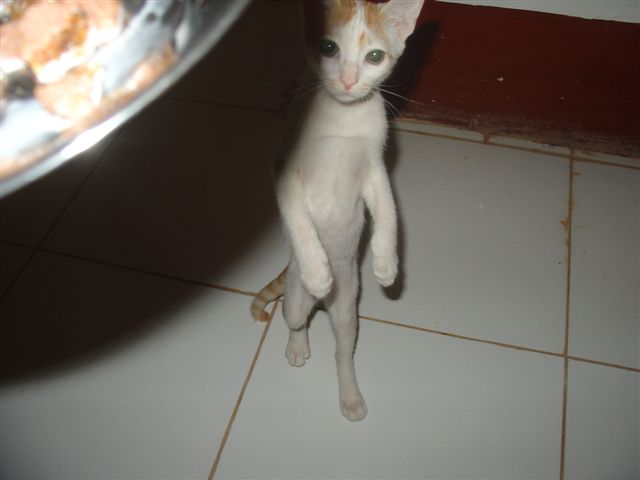 Shadow, our very own "meerkat"
If you've been watching the World Cup Soccer in South Africa, you will have seen the Pepsi adverts. The  cute suricates in the adverts are known as meerkats. When visiting my grandfather on the farm in the Free State, meerkats were a common sight i  the veld/fields.  They'd be sunning themselves, looking for food, the young ones playing rough-and-tumble while a lookout stood guard on a mound. At the approach of danger, they would all literally disappear into the earth! While touring the Kgalagardi Transfrontier Park a few years ago, Grant and I would stop the vehicle and watch the meerkat colonies near the road. The lookout stands on his hind legs, front paws (hands) held out,  an almost human stance.

Since Shadow arrived, we've noticed that he is able to stand on his hind legs with his front paws held loosely in front of him. We've given him the nickname of, you guessed it,  meerkat! However, it's not the South African (English) name of this animal that we call him; and it's not the Arabic version, although I do know what meerkat is in Arabic. (lol!)

It is meerkat in one of the eleven official languages of South Africa.


The isiZulu word for meerkat is uchakide.

Note: leave out the first "oo" which makes the clicking easier!

Ironically, "meerkat" is actually an Afrikaans word (yes, Afrikaans is another one of the eleven official languages in South Africa!) and directly translated means: "More Cat"

For more pet posts around the world, click here.
Posted by Jo at 3:35 AM