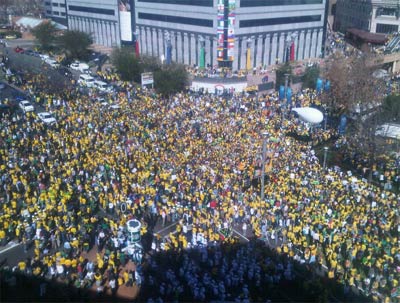 Above is a photo downloaded from the Internet: the South Africa vuvuzela moment, as it has been dubbed.
The streets of Sandton were covered in a sea of gold and green as South Africans came out in support of the national team which was touring the area in an open top bus.
"I have never seen such a mood," was what former Bafana Bafana player Doctor Khumalo had to say.

School children in minibus taxis also blew their vuvuzelas from the inside of the vehicles, while other motorists hooted. Metro Police officers also took to hooting and among the myriad of noise an ambulance kept watch at the corner of Prinsloo and Vermeulen streets. The sea of noise however did not seem to obstruct traffic much.

Across the country, people had been asked to blow their vuvuzelas at midday on Thursday in support of Bafana Bafana and the World Cup 2010.
(Source: http://www.vuvuzelamoment.com/)

Yesterday was the opening match between South Africa and Mexico. We, here in Khartoum, saw the first minute of the game and then we lost the signal. The picture returned forty minutes into the game.

Halftime came and went; within a few minutes of the second half, Bafana Bafana scored the first goal. Whoo-hoo. What excitement! Grant said he regretted not bringing a vuvuzela from South Africa; he'd have blown it!

The picture returned after the game and we saw it had ended on a draw.  What a relief for South African fans. At least Bafana Bafana will go on to play in the next round now.

As the tension of playing in the opening match is over now, I believe that the national team is going to surprise us.

The Arabic word for noise is sahoot.
Posted by Jo at 3:30 AM