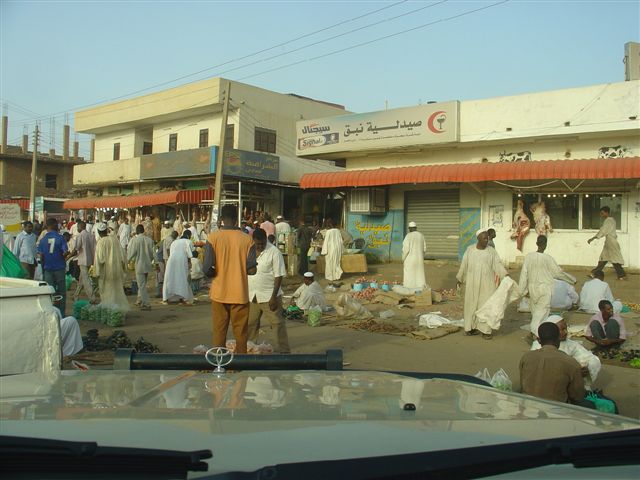 Khartoum vegetable market already bustling early in the morning
Last week Grant and his technician, Marcel, took me to the large fruit and vegetable market on the outskirts of Khartoum. This is the wholesale market where the other smaller street  vendors buy their produce so you have to go early. We arrived there before 8am  and the place was already crowded. Men pushed wheelbarrows, guided donkeys and carts, drove pick-up vehicles and mini-busses through the market. Others had huge baskets hitched onto their shoulders, still others carried hessian sacks on their backs. Three-wheeled rickshas were loaded; all were taking their produce back to their businesses in the city.
The vegetable market sellers had their wares arranged on the ground. Vendors called out to you offering their produce while you tried to keep to a narrow path between the vegetables. You, in turn, stop to check and bargain, keeping off the track of vehicles and side-step slimy vegetable off-cuts lying all on the ground.
The prices were excellent. For instance: in the city when buying from street vendors, I pay SDG5/US$2 for a kilogram of potatoes. In the market the price was SDG2/US$.80c! Tomatoes (SDG15/US$6 per kilogram) were almost as expensive as they've become on the street, (SDG20/US$8) but I managed to bargain with seller and paid SDG12/US$4.80 eventually. 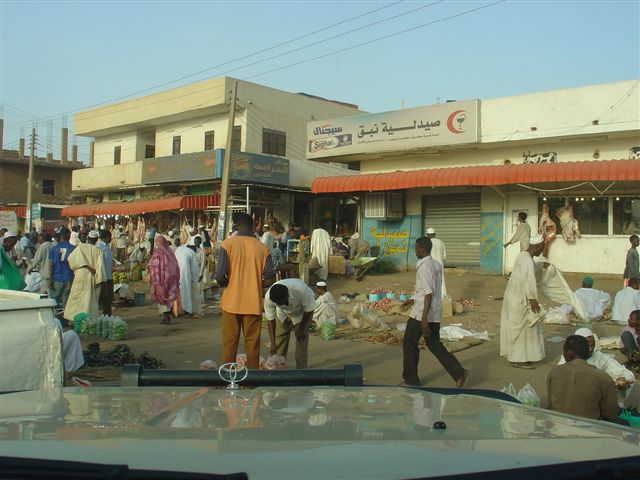 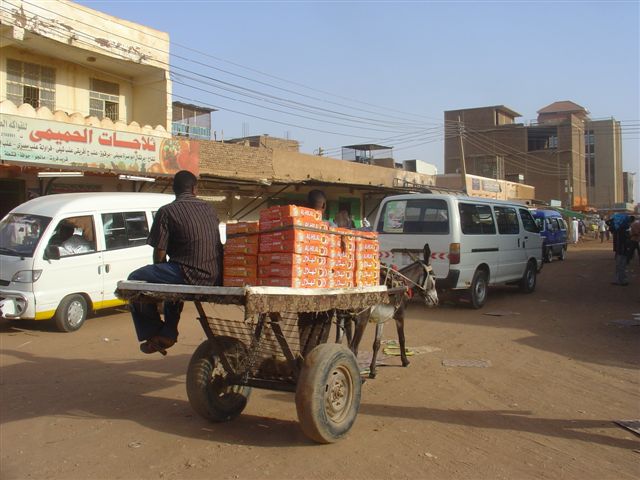 Certain fruit is imported from Egypt 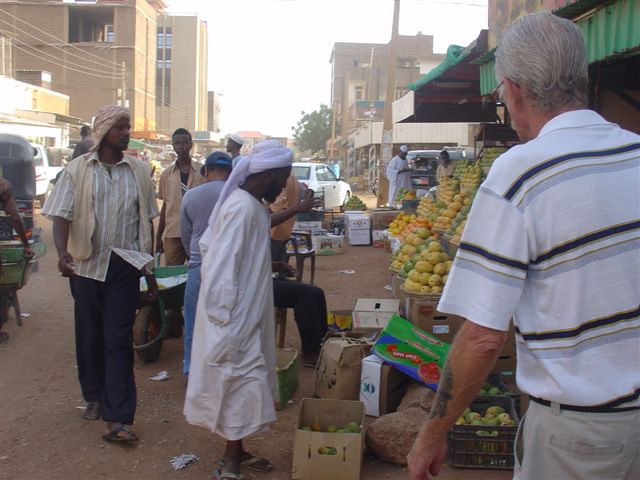 The fruit is beautifully displayed on shelves and racks and not laid out on the ground like in the vegetable market
We moved onto the fruit section of the market. I always start with two dozen oranges, all I need for a week. On the city street, a dozen costs SDG6/US$2.40. Here, at the first two stalls the vendor informed me that he only sells by the box, which contains five dozen oranges. (too much for us) The next seller wanted to charge me SDG7/US$3.76 per dozen. Eventually I found oranges for SDG5.50/US$3.70 per dozen. Phew! 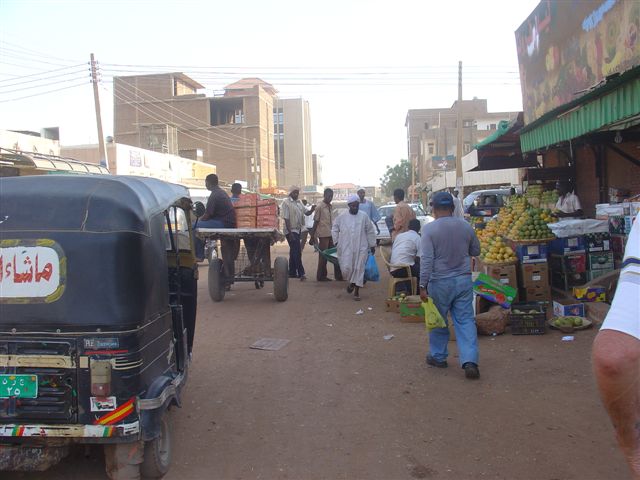 When I tried to buy two green and two red apples and an two pears, the seller laughed and told me to pick six fruit. He then gave them to me as a gift! Whoo-hoo! 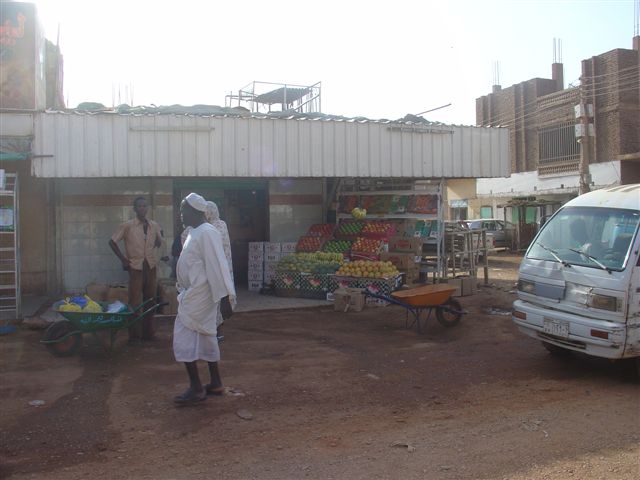 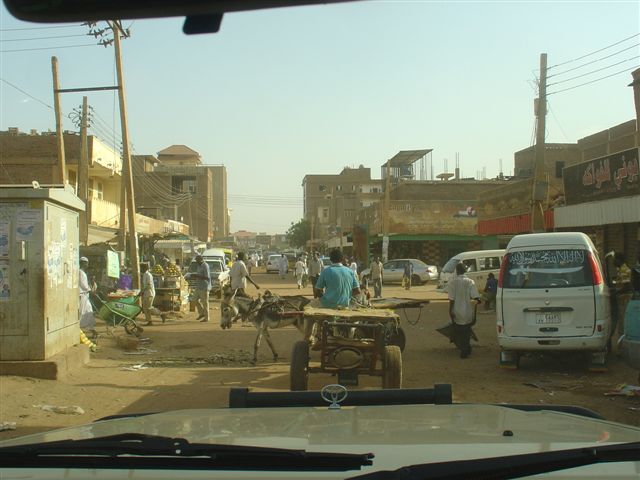 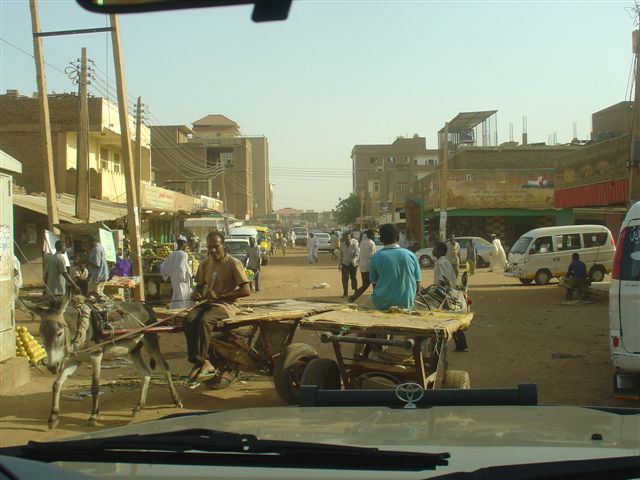 A really interesting and fruitful excursion (pardon the pun!)  . We came away with fruit and vegetables which would have cost one-and-a-half times as much on the street and more than double at the supermarkets.
The Arabic word for vegetables is ghadrawaad. The Arabic for fruit is fuwaki.