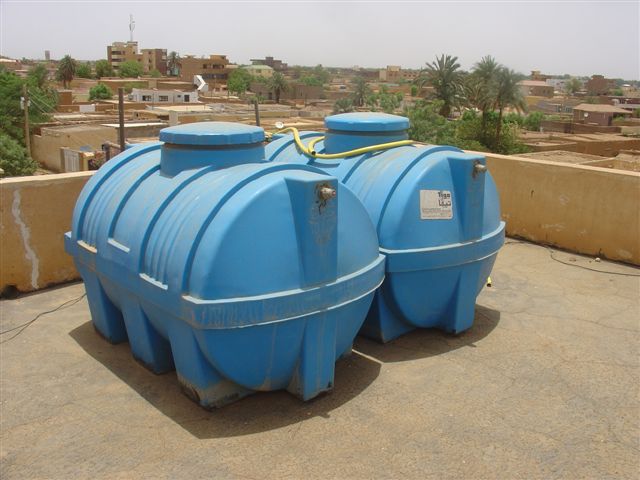 For the past three weeks we've  been experiencing extremely hot weather. Last Sunday, 23 May the temperatures in Khartoum reached 50°C/122 °F with night temperatures lowering to a mere 40°C/106°F! Many of you have asked how I cope under these conditions. Some have asked if we have airconditioning.

OK so here is an atypical day in the life of this expat in Khartoum:
Last Saturday morning I settled down in front of my computer for a day of blogging, in our reasonably cool office-cum-living room.  This is the day Miriam works for Issam in his downstairs flat.  She did his laundry and then she sprayed the entire courtyard down with the hose. Grant came home from the city and said he hoped there would be enough water for the day after Miriam had finished. The tanks up on the roof (pictured above) are  supposedly filled overnight by an electric pump in the courtyard. However, Issam kindly allows two men to sleep down there and they regularly turn off the pump (as it obviously keeps them awake. Ha!)

Well, this was the case that day. With Miriam doing a  large wash and hosing down the courtyard, we ran out of water. At the same time the whole city's water supply was turned off while the municipality did maintenance repairs.
I took the above photo in August last year. Since then I have shown Miriam how to wash the courtyard and roll up the hose  and store it in the outhouse downstairs. I also asked Issam to get the guys to move their beds under the veranda during the day. He did and the guys complied! Now we have a neat and tidy courtyard around the apartment building. What would the world do without women? LOL! 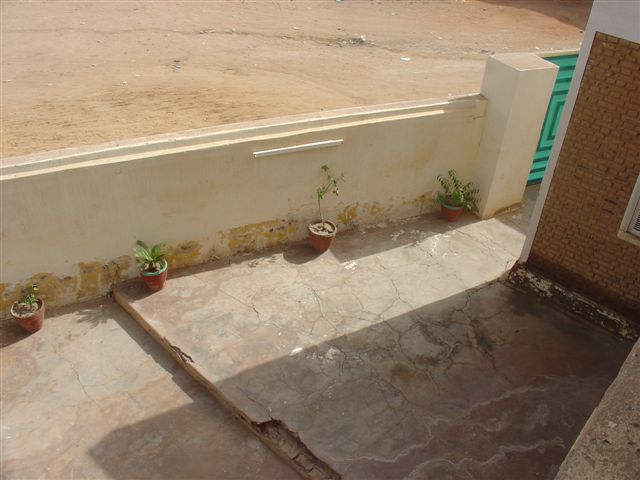 The surrounding courtyard below looks much better with a woman's touch! 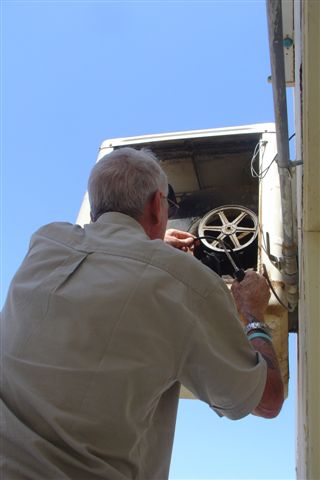 Grant replaces the fan belt on the office air cooler
Now, it's not too much of a problem being without water for an entire day ; it's not pleasant but it can be endured. Being without airconditioning though, was another matter. Because the electricity grid in this part of the city cannot cope with conventional aircondioners, we have antiquated aircooled units.
These coolers have wads of straw lining three sides of the unit. A pump pours water over the straw while a fan blows air through the straw into the room. It is a very effective, albeit, a high maintenance system. And now because there was no water for the air coolers, Grant had to turn them off. Boy was it hot.
We were just to expire when Miriam told me there was still a little water downstairs.  Grant said he'd prepare the air conditioners to add water manually if we'd bring the water. (He had the muckier job; we, the back-straining task) Miriam and I painstakingly filled a twenty-litre bucket and together we lugged it up the stairs to our flat. We repeated this action until we had forty litres each for all three the airconditioners. Grant added the water, did something mechanical to the unit and turned it on. Viola! Within five minutes we felt tasted the fruits of our labour!
At three o'clock that afternoon, the municipal water supply came on again. Grant turned on the pump and by the time his makeshift water supply would have dried up in the aircons, the water began to pump into the machines via the water pipes. The tanks on the roof would take another eight hours to fill up, so that night I bathed in a bucket! BTW, Grant set the alarm and at two-hourly intervals, checked that the pump downstairs was still on.
On Sunday (which is the the first day of the week and a work day in Sudan) Grant was at the new workshop where he came across a spare pump. He brought it home and that afternoon by way of a long hose connected to the tap in the courtyard and flowing into the blue boys on the roof, he filled the tanks within the hour instead of eight.  Now he has a timetable whereby he checks the tanks before he goes to bed at night and again first thing in the morning. He's turned off one tank and keeps it as a backstop for our personal use. Mmm, even though I'm quite longsuffering and didn't complain at the time, I don't think he enjoyed our waterless Saturday any more than I did! 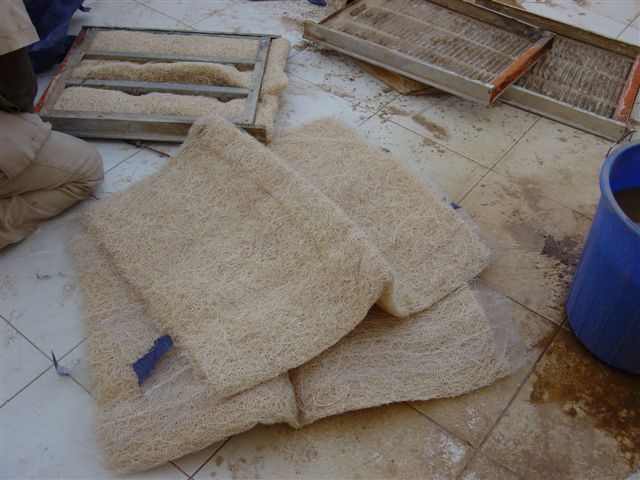 The straw mats are inserted into panels on three sides of the air cooler units. A pump wets them while a fan blows air through them into the room. Antiquated? I'd say... But for now they're effective and all we have! 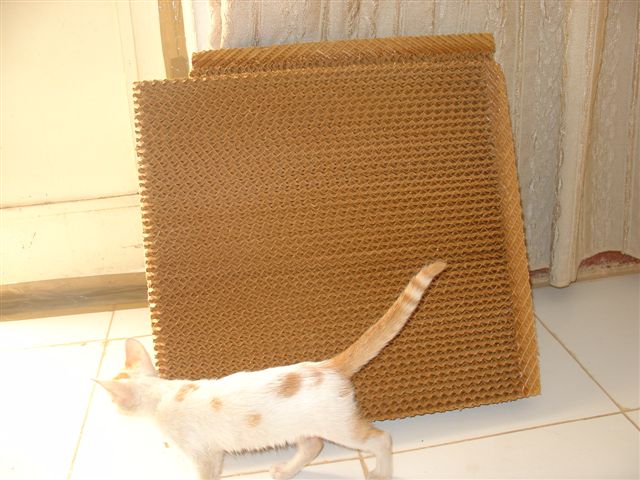 Last week Grant found a new type of matting for the aircoolers. Although they are more expensive, they are honeycombed mats instead of straw ones. He has replaced all the old straw mats with this type. The airconditioners have to be serviced every three months. I'm blessed with a handy husband! 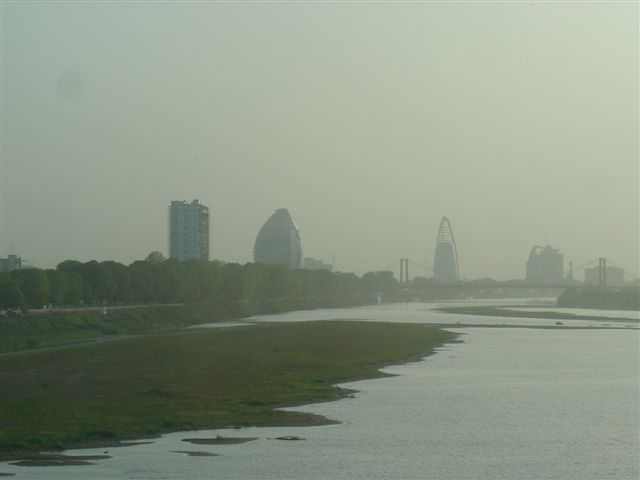 While the temperatures remained in the high forties and fifties last week, the sky began to cloud over. Only this was not rain clouds.  Before we can expect any rain, we first have to endure the desert sandstorms. Crossing the Nile on the Shambat Bridge last week, I managed to snap a few photos (which is not actually allowed!) Note how hazy the horizon is. That is dust... 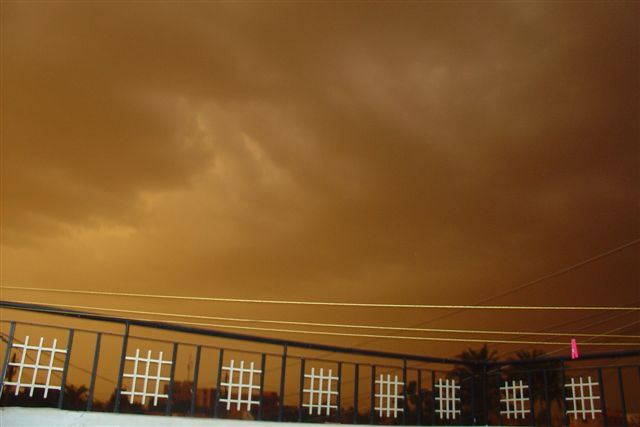 On Friday evening while we were enjoying a juice on the balcony we watched the clouds blow across the city towards us. By 7pm the sandstorm was upon us. (We had long since taken the birds, cat and ourselves indoors and locked the door!) I borrowed this photo from a sandstorm which I managed to photograph last year before it actually almost blew me into the flat! The storm on Friday night was just as bad and Grant would not allow me to stay out there and photograph it. 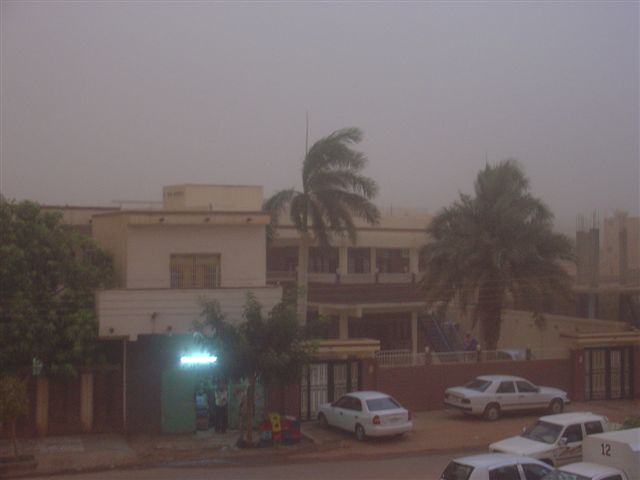 I managed to photograph the street and the spaza shop opposite from the safety of our bedroom. You can see by the way the trees are bending and the blurry light above the shop how hard the wind is blowing and how much dust is in the air
In the same week leading up to the waterless situation, we had four power outages!
On the bright side, all our hard work in April when we springcleaned the flat and Grant sealed all possible cracks and gaps against the dust storms, has paid off. With the violent duststorm on Friday night, we had hardly any dust in the house. Success!
Oh, and the reason why we live in this part of the city? Well, that's a post for another time... soon.
For more of other people's worlds, click here
Posted by Jo at 3:30 AM