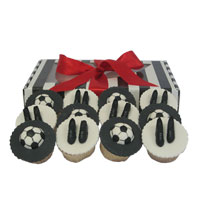 If you celebrate a birthday during the world cup, you might receive a box of cupcakes via an online florist,  decorated with soccer balls and togs
World Cup Soccer South Africa 2010, has reached  fever pitch this week. Every business in South Africa has cashed in on this auspicious event: the magazines, chain grocery stores, online bookshop sites, florists, clothing stores, stationers, duty free shops at the airports and of course the sports shops. You can buy nifty little water bottles shaped like a soccer ball from Woolworths. The kids love them. Many types of clothing and headgear is available in soccer - related colours and icons. You can order soccer mania-related gifts and flowers from online florists. The innovative ideas are endless and everyone hopes to make money from the World Cup soccer. Many Guest houses and Bed and Breakfasts in South Africa have increased their rates three times and still they're fully booked.
Grant regularly reads snippets of the upcoming event and the latest soccer mania-related fad to me from the Internet. (So I thought I'd better blog about it!) We've had no cable television connected here as almost all the programs are in Arabic. Recently though, Grant signed up for the World Cup Soccer package so that we can follow the matches. He, like many South Africans, is a rugby fan rather than a follower of soccer but it should be fun and entertaining to watch this first ever in Africa, World Cup Soccer.


All the photos below are downloaded from the Internet, and the quality is not of the best.

A group of fans on the beach in Cape Town 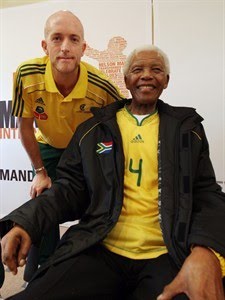 Nelson Mandela,  pictured above, first democratic president in South Africa from 1994 to 1999. Nelson, also known affectionately as Madiba*,  is one of the most popular and beloved statesmen of our time.
Originally Nelson, a month short of his 93rd birthday, decided to watch the World Cup soccer on television in the comfort of his home in upmarket Johannesburg. He declined the invitation to open this world class event even though he was a key figure in the opening of the World Cup Rugby which South Africa hosted in 1995.  However, this week he agreed to open the first match in Johannesburg on Friday. The Madiba* magic will be greatly appreciated by the sports fans.
Note: *Madiba is the name of the clan of which Nelson Mandela is a member. A clan name is much more important than a surname as it refers to the ancestor from which a person is descended. Madiba was the name of a Thembu chief who ruled in the Transkei in the 18th century and the Madiba clan is still very important in the region. It is considered very polite to use someone's clan name. 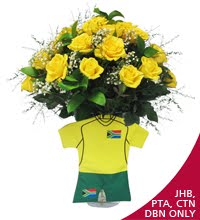 If you have a baby (boy) or are ill in hospital before or during the World Cup Soccer, you may expect a bowl of beautiful yellow roses set in a lot of green foliage, and a gold shirt and green shorts. Many World Cup Soccer - related gifts can be ordered via the Internet  through an online floral and gift website. 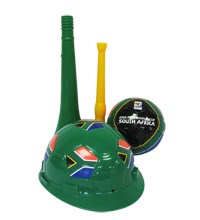 Above is a hard hat, a beanie and two vuvuzelas in the traditional South African colours,  green and gold
Over the months leading up to the World Cup Soccer, the vuvuzela has fascinated and enthralled a great many people while irritating others. A vuvuzela, also called a "lepatata" (its Setswana name)  is a stadium or blowing horn, approximately one metre in length,  used extensively to depict the excitement of fans at a soccer match. 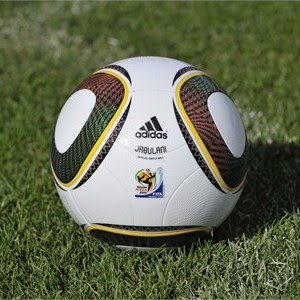 Jabulani, the official matchball has only eight thermally bonded panels, which makes the ball a perfect sphere and ensures accuracy.
Adidas has turned up the dial to 11 with its new match ball for the 2010 World Cup — the Jabulani, which means to celebrate in isiZulu. There are 11 different colors on the ball, which represent the 11 players on the field for each team. It is the 11th official Adidas World Cup match ball. There are 11 official languages in South Africa among the country’s 11 tribes. However, on the eve of kick-off, there is some controvesy about this ball. You can read more here.

Now all that remains is to organize snacks and fresh fruit juice, (no alcohol in the Sudan) pull up a chair and watch the kick-off between South Africa and Mexico on Friday afternoon, 11 June 2010 in Johannesburg.

The Arabic word/phrase for World Cup Soccer South Africa, 2010 is Kasalaalum fil Jenoop Afriria, ٢٠١٠
Posted by Jo at 3:30 AM