I thought I'd give an update on the state of my cat bite wound. As mentioned in a post earlier this week, I've had to have the first of three anti-rabies injections. I have two more which are packed in my suitcase and which our house doctor will administer for me on Monday and two weeks later, respectively.

Every morning I had my wound dressed  at 8am by John Shoshiwe . On Tuesday because we left very early for Mwanza (Grant's dental appointment), John came in to hospital early and treated my wounds at 5.30am. 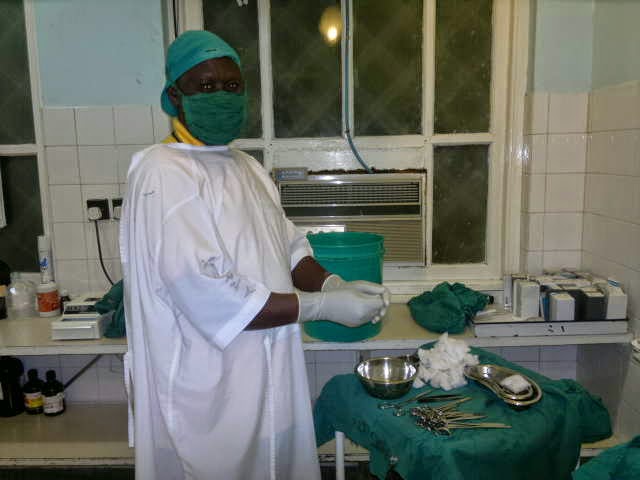 On Monday, while lying face down on the gurney, lost one of my earring studs. John saw me looking for it after he'd finished treating my wounds,   and said that if he found it, he'd keep it for me. After my dawn treatment on Tuesday he said, "Don't worry Bibi, when I sweep the theater, I'm sure I'll find it."

That evening after we'd returned from Mwanza, Grant took the driver, Frank home. As he drove past the hospital (not his normal route) an orderly came out of the grounds and flagged him down. He gave Grant a folded tissue and said it was for Bibi. My earring stud! Incredible!

Next day John was on a week's leave and his assistant, Joshua dressed my wounds. Although he wasn't unprofessional, he was a lot rougher and dug deeper when flushing the wounds. I twitched and yelped on frequently while he said "Pole" (sorry) !

My antibiotic injections on Monday morning started as an intravenous application. The stent kept falling out and although Teddy, the day sister next to the dispensary managed to get the meds into my veins, I bled profusely. That night when I visited the women's ward where the sister on duty would medicate me, I begged her (sound dramatic? It was! LOL) to please give the injection intro-muscularly. She warned me that it would be painful and I replied that I had a high pain threshold...

When you're injected by this hospital staff, they talk to you while preparing the syringes, putting you at ease. Then she'll tell you to turn around (I leaned over the bed) and she swabs the area, and as she inserts the needle she says: sindano/injection; as the fluid enters your body she says: dawa/medicine.

Well, the first injection was a little prick and although I felt the meds flowing into my body, it was painless. When she injected the second and largest antibiotic, I also didn't flinch; then the medicine left the needle and entered this Vintage Bibi,  I clutched the edge of the gurney; I must have yelped out loud,  because the sister said: Pole to which I replied Asante /thank you (this is the norm!)

This morning was my last two injections. Grant dropped me at the hospital and I entered the women's ward with my medication. All the staff that I pass in the corridors and in and around the wards, ask how the wound is. And I stop to show them: much better! When the sister took me into the ante-room to give me my final injections, she did the smaller, painless one first. Then she administered the largest (but thankfully the LAST) injection. As the dawa flowed under my skin, I came over faint!

I remember coming to in the women's ward, with a phalanx of nurses and sisters (and mothers whose children are in that ward) hovering anxiously around me. As soon as I could stand, the sister helped me along the corridor to the car, where Grant, totally unaware of his wife's predicament, was waiting! At home I lay down for about ten minutes; Regina brought me a glass of iced water. Soon I was up and about again and managed to continue and complete packing for our trip!

All this drama because of a highly-strung Khartoum slums rescue cat! Mmm..

And now for blogger friend, Margaret, Birding for Pleasure I'm adding the first video I took of the pups.

I'm signing off now, packing my Ultrabook in my backpack and getting ready to go!

You all keep well, safe and happy till we meet again on Blogger.